Global Warming, or not ?

Inconvenient Truths: 2014 Global Natural Disasters Down Massively! …No Trend In Tornado/Cyclones Since 1950! More people and more wealth, yet less losses. 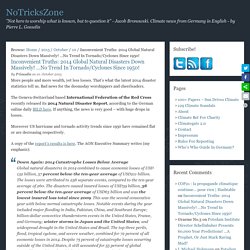 That’s what the latest 2014 disaster statistics tell us. Bad news for the doomsday worshippers and cheerleaders. The Geneva-Switzerland based International Federation of the Red Cross recently released its 2014 Natural Disaster Report, according to the German online daily BILD here. If anything, the news is very good – with huge drops in losses. Moreover US hurricane and tornado activity trends since 1950 have remained flat or are decreasing respectively. A copy of the report’s results is here. Down Again: 2014 Catastrophe Losses Below Average Global natural disasters1 in 2014 combined to cause economic losses of USD 132 billion, 37 percent below the ten-year average of USD211 billion.

According to the Red Cross data, many of the deaths were due to cold, with 505 alone occurring in one country – Peru! 90% less deaths A total of 8186 people died in 2014 because of natural disasters. Lowest in 10 years No Cat 3 hurricane landfall in 9 years. SCM RC 2015 08. Nobel Laureate Smashes the Global Warming Hoax. Top U.S. physicist claims global warming is a “scam” 5 5Share5 27 Harold Warren Lewis, a respected physicist who had previously advised both the U.S. 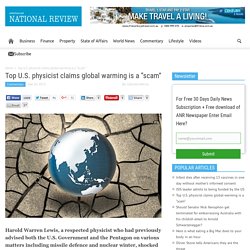 Government and the Pentagon on various matters including missile defence and nuclear winter, shocked his peers when he disseminated his letter of resignation from the American Physical Society. Lewis accused the American Physical Society of supporting “the global warming scam, with the trillions of dollars driving it that has corrupted so many scientists.” The physicist’s letter contained a number of complaints, including the APS’ lack of a response to his endeavours to gather a committee to evaluate evidence for a human link to climate change. Lewis revealed that global warming was “the greatest and most successful pseudoscientific fraud” he has even seen in his career. The letter, sent via e-mail to Curtis G. Lewis said that his former pride at being an APS Fellow turned into shame, which is why he decided to resign. 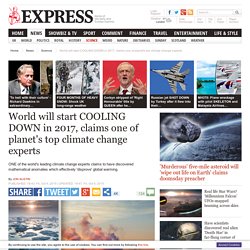 The academic, from Perth, Australia, who has passed six degrees in applied mathematics, has analysed complex mathematical assumptions widely used to predict climate change and is predicting world temperature will stagnate until 2017 before cooling, with a 'mini ice age' by 2030. He says fundamental flaws in how future temperatures may rise have been included in the 'standard models' and this has led to inflated mathematical - and therefore temperature - predictions. He said: "There is an intellectual stand-off in climate change. Skeptics point to empirical evidence that disagrees with the climate models. "Yet the climate scientists insist that their calculations showing a high sensitivity to carbon dioxide are correct — because they use well-established physics, such as spectroscopy, radiation physics, and adiabatic lapse rates.