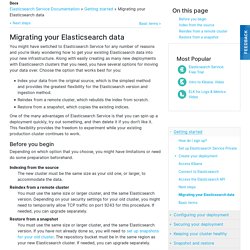 Along with easily creating as many new deployments with Elasticsearch clusters that you need, you have several options for moving your data over. Choose the option that works best for you: Index your data from the original source, which is the simplest method and provides the greatest flexibility for the Elasticsearch version and ingestion method. Reindex from a remote cluster, which rebuilds the index from scratch. Restore from a snapshot, which copies the existing indices. One of the many advantages of Elasticsearch Service is that you can spin up a deployment quickly, try out something, and then delete it if you don’t like it. Before you begin Depending on which option that you choose, you might have limitations or need do some preparation beforehand. Indexing from the source. Open Distro for Elasticsearch.

Quick and Dirty Autocomplete with Elasticsearch Completion Suggest. After answering a question about autocomplete on StackOverflow, we thought it best to come over to the Qbox blog and write more extensively about the different ways of approaching autocomplete. 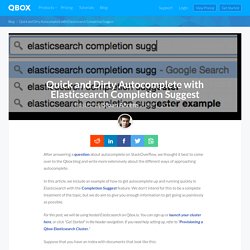 In this article, we include an example of how to get autocomplete up and running quickly in Elasticsearch with the Completion Suggest feature. We don't intend for this to be a complete treatment of the topic, but we do aim to give you enough information to get going as painlessly as possible. For this post, we will be using hosted Elasticsearch on Qbox.io. You can sign up or launch your cluster here, or click "Get Started" in the header navigation. Understanding "Query Then Fetch" vs "DFS Query Then Fetch" In our last article on starts-with phrase matching, we ran into a situation where the returned scores were suspicious. 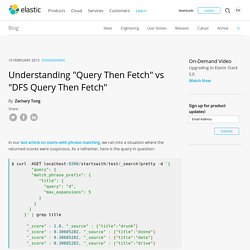 As a refresher, here is the query in question: See how the document “drunk” receives a score of 1.0, while the rest have a score of 0.3? Shouldn’t these docs all have the same score, since they match the query for “d” equally the same? Optimizing Search Results in Elasticsearch with Scoring and Boosting. Although Elasticsearch offers an efficient scoring algorithm, it may often be inadequate in e-commerce contexts. 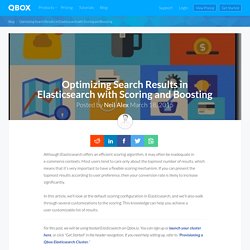 Most users tend to care only about the topmost number of results. which means that it’s very important to have a flexible scoring mechanism. If you can present the topmost results according to user preference, then your conversion rate is likely to increase significantly. In this article, we’ll look at the default scoring configuration in Elasticsearch, and we'll also walk through several customizations to the scoring.

GitHub - nreese/enhanced_tilemap: Kibana mapping visualization. Elasticsearch Reference [5.4] Elasticsearch - How to convert filtered query with Multi_Match to filtered query with Common Terms. ElasticSearch, multi-match with filter? Improving Search Performance with Fuzziness in Elasticsearch. A fuzzy search is a process that locates web pages or documents that are likely to be relevant to a search argument even when the argument does not exactly correspond to the desired information. 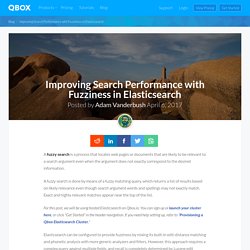 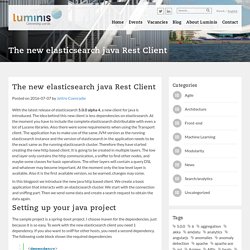 The idea behind this new client is less dependencies on elasticsearch. At the moment you have to include the complete elasticsearch distributable with even a lot of Lucene libraries. Also there were some requirements when using the Transport client. In this blogpost we introduce the new java http based client. Setting up your java project The sample project is a spring-boot project. Creating the connection To create a connection you can use just one line. Of course you can provide more than one host, but our goal is to use the sniffer to find the other hosts. Removing Data From ElasticSearch. Search - Changing the default analyzer in ElasticSearch or LogStash. Elasticsearch Reference [5.4] The common terms query is a modern alternative to stopwords which improves the precision and recall of search results (by taking stopwords into account), without sacrificing performance. 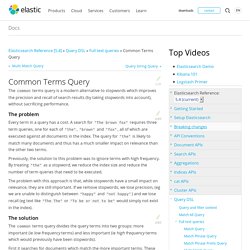 The problemedit Every term in a query has a cost. A search for "The brown fox" requires three term queries, one for each of "the", "brown" and "fox", all of which are executed against all documents in the index. The query for "the" is likely to match many documents and thus has a much smaller impact on relevance than the other two terms. Previously, the solution to this problem was to ignore terms with high frequency. The problem with this approach is that, while stopwords have a small impact on relevance, they are still important. Elasticsearch: The Definitive Guide [2.x] As useful as phrase and proximity queries can be, they still have a downside. 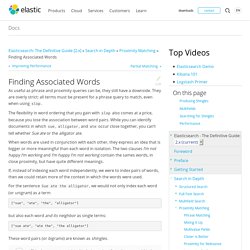 They are overly strict: all terms must be present for a phrase query to match, even when using slop. The flexibility in word ordering that you gain with slop also comes at a price, because you lose the association between word pairs. While you can identify documents in which sue, alligator, and ate occur close together, you can’t tell whether Sue ate or the alligator ate. When words are used in conjunction with each other, they express an idea that is bigger or more meaningful than each word in isolation. 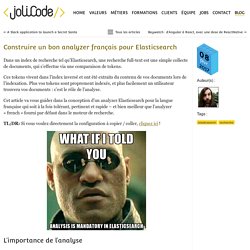