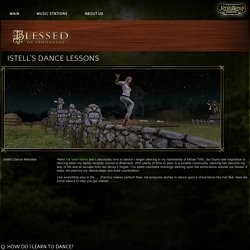 Dance instructors happily teach everyone to dance during Spring Fest, Lithe Fest (Summer), Harvestmath (Autumn) and Yule (Winter) Festivals. Dance lessons are held in the race hometowns of Breeland (Bree-lands: in between Bree and the Hengstacer Farm), The Party-Tree (The Sire, Hobbiton: north-East of Michel Delving), Duillond (Ered Luin: north of Celondim), and Thorin’s Hall ( Ered Luin: inside the Halls near the fishing area). You will be taught two dance-types for each dance teacher of that race. [Note: if you do not wish to wait for the festivals, you can purchase dances in the LOTRO store. For directions and details, view A Casual Stroll to Mordor's guide!] The dance instructors do not ask for any form of payment for their services, however they run dry on patience. Warden Tanking Guide - Delinquents Of Middle Earth - Dwarrowdelf - LOTRO - Kinship Hosting - Gamer Launch. So, you've leveled your warden, already felt like godlike questing around, but you just got asked to tank. 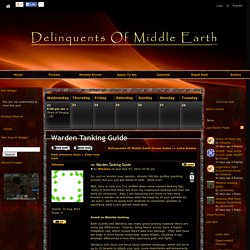 What now? Well, here to help you I've written down some warden tanking tips. Keep in mind that these are from my experience tanking and may not work for everyone. Also, I am assuming you more or less have leveled a warden up and know what the majority of your gambits do. Showthread. Showthread. Farming to Cooking, best way? Warden leveling Build. Best Class Choice/Combo For Couple Players - General Discussion - Lord of the Rings Online Forums at MMORPG.com. Originally posted by Mulsiphix After 30 though are they the top killing machine? 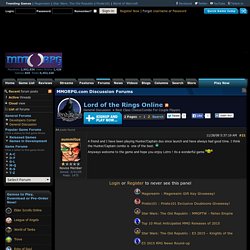 Generally what I'm looking for is the greatest killing machine capabilities without the constant aid of a healer. Also, my wife is somewhat bad at micromanagement. What would be poor choices for somebody that had trouble in that area? How about a Guardian/Champion combo? I went to lotro.com and looked at the class bio's but still don't feel like I have a good idea of what a solid, yet fun, combo would be. First, you could do 99% of this game solo and have no problems. Burglar..hardest class in the game, mostly useless except for debuffing bosses and is more known for soloing. How do I not Fail the Festival Dance. 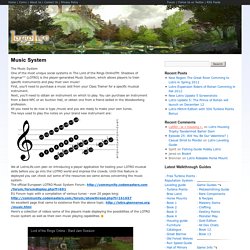 First, you'll need to purchase a music skill from your Class Trainer for a specific musical instrument. Next, you'll need to obtain an instrument on which to play. You can purchase an instrument from a Bard NPC or an Auction Hall, or obtain one from a friend skilled in the Woodworking profession. Warden Gambit Chart - Lord of the Rings Online (LOTRO) - Riders of Rohan - Update 8. LOTRO Warden Gambit Chart The chart presented here shows the special moves — gambits — available to the warden, a character class in Turbine's RPGMMO Lord of the Rings Online (LOTRO). 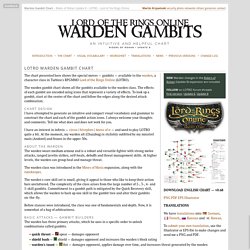 The warden gambit chart shows all the gambits available to the warden class. The effects of each gambit are encoded using icons that represent a variety of effects. To look up a gambit, start at the center of the chart and follow the edges along the desired attack combination. Showthread. Beginner's Guide to Warden Melee DPS. I cover a lot of warden stuff with regard to tanking, but I am going to lay out what I know of warden dps, specifically melee dps. 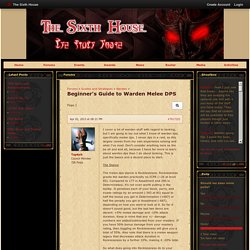 I never dps in a raid, so this largely comes from my own experience soloing and what I've read. Don't consider anything here as the be all and end all, because I have far more to learn about warden dps than I do about tanking. This is just the basics and a decent place to start. The Stance. LOTRO Trait Tree Planner. Rotation and gear help needed. Warden - Lotro-Wiki.com. Wardens are mobile melee combatants who use Javelins for initiating combat and against ranged foes. 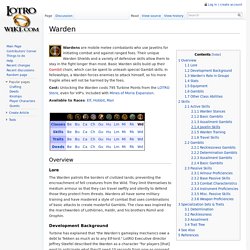 Their unique Warden Shields and a variety of defensive skills allow them to stay in the fight longer than most. Basic Warden skills build up their Gambit chain, which can be spent to unleash special Gambit skills. In fellowships, a Warden forces enemies to attack himself, so his more fragile allies will not be harmed by the foes. Cost: Unlocking the Warden costs 795 Turbine Points from the LOTRO Store, even for VIP's. Included with Mines of Moria Expansion. Available to Races: Elf, Hobbit, Man Overview. The Lord Of The Drinks. Now that we can mix and match our stats as we want with the new essences I thought people might be interested to know what basic caps there are for the different stats. 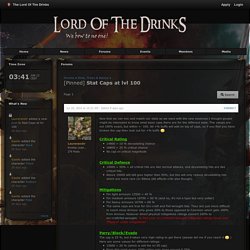 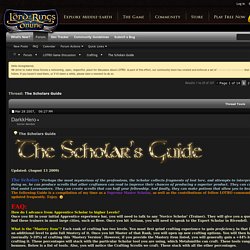 Wonderful Places in LOTRO's Middle Earth: Where to find Scholar Stuff in Lotro. Finding Scholar artifacts in LotroSo, you’ve decided to take the path of the Scholar in Lotro. 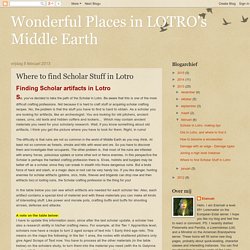 Be aware that this is one of the more difficult crafting professions. Not because it is hard to craft stuff or acquiring scholar crafting recipes. No, the problem is that the stuff you have to find is hard to obtain. As a scholar you are looking for artifacts, like an archeologist. You are looking for old pitchers, ancient vases, urns, old texts and hidden coffers and lockers... Scholar Artifacts per Tier. LOTRO Life - The Lord of the Rings Online MMORPG Fansite with News, Guides, Quests, Web Comic, Community, Information. Minstrel - Lotro-Wiki.com. The Minstrel is the heart of a fellowship, a herald of hope, inspiration, and renewal. His knowledge of ancient songs and lore not only enable him to bolster fellowship morale, but also to provide motivation against the forces of darkness. When the Minstrel is alone, he becomes an intimidating opponent capable of demoralizing foes through an assortment of ballads, cries, and calls.