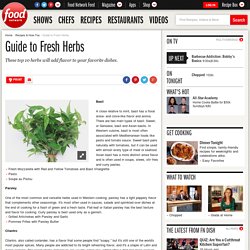 There are two main types of basil: Sweet, or Genoese, basil and Asian basils. In Western cuisine, basil is most often associated with Mediterranean foods like pesto and tomato sauce. Sweet basil pairs naturally with tomatoes, but it can be used with almost every type of meat or seafood. Asian basil has a more distinct anise flavor and is often used in soups, stews, stir fries and curry pastes. Parsley One of the most common and versatile herbs used in Western cooking, parsley has a light peppery flavor that complements other seasonings. Cilantro Cilantro, also called coriander, has a flavor that some people find "soapy," but it's still one of the world's most popular spices. Mint Although more commonly associated with sweet treats, mint lends its cooling, peppery bite to plenty of savory dishes, particularly from the Middle East and North Africa. 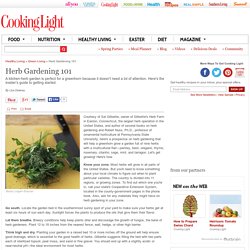 Let's get growing! Here's how. Know your zone. Most herbs will grow in all parts of the United States. But you'll need to know something about your local climate to figure out when to plant particular varieties. Keeping Fresh Herbs Fresh - 11 Herbs Every Cook Should Use. • Loosely wrap herbs in a damp paper towel, then seal in a zip-top plastic bag filled with air. 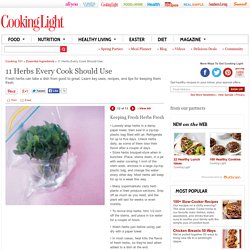 Refrigerate for up to five days. Check herbs daily, as some of them lose their flavor after a couple of days. • Store herbs bouquet-style when in bunches: Place, stems down, in a jar with water covering 1 inch of the stem ends, enclose in a large zip-top plastic bag, and change the water every other day. Most herbs will keep for up to a week this way. • Many supermarkets carry herb plants in their produce sections. . • To revive limp herbs, trim 1/2 inch off the stems, and place in ice water for a couple of hours. • Wash herbs just before using; pat dry with a paper towel. • In most cases, heat kills the flavor of fresh herbs, so they're best when added to a dish at the end. Learn more about herbs:All About HerbsHow to use fresh herbs to create lively dishes.

Herb BasicsLearn how to keep your fresh herbs fresh. How to use herbs and spices in cooking. Most herbs can be found dried or fresh and can be used either way with ease. Herbs are considered ro be the leaves and greener parts of the plant - the seeds, bark, roots, etc. are normally considered a spice. Some plants are both. :) [GUIDE LVL 55] - Daggerspell - GOD MODE 1v1/2/3 - Arche-Base. Shield Slam Enervate Inflicts [min mana burn] – [max mana burn] damage over time on Stunned targets. 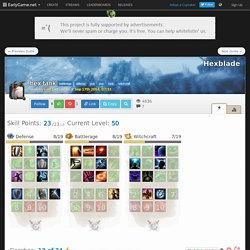 Roleplaying. Interesting Locations - ArcheAge - The Romantics Community. So, I have started marking down the coordinates of various things I find in the world. 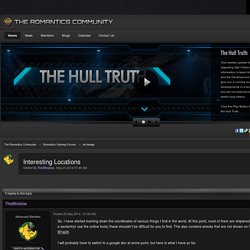 At this point, most of them are shipwrecks. As long as you have a sextant(or use the online tools) these shouldn't be difficult for you to find. This also contains wrecks that are not shown on the map linked by M1w24. I will probably have to switch to a google doc at some point, but here is what I have so far: Giant under sand (not the easiest to spot): W5 / 7 / 1 || S7 / 44 / 31 Old treasure chests (not sure how to open them): ArcheAge Builder by Arche-Base. 8. Houses and fields - ArcheAge. This chapter introduces you into the system of housing and agriculture in ArcheAge. 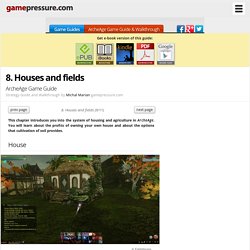 You will learn about the profits of owning your own house and about the options that cultivation of soil provides. House A Farmhouse. Owning a house, in ArcheAge, is inseparably bound to the system of crafting. It is the private houses of the players that serve as workshops, where the most valuable items in the game are crafted. Large Scarecrow Quest Walkthrough (East) FULLY UPDATED to Patch 1.2! 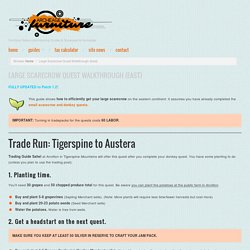 This guide shows how to efficiently get your large scarecrow on the eastern continent. It assumes you have already completed the small scarecrow and donkey quests. IMPORTANT: Turning in tradepacks for the quests costs 60 LABOR. Trading Guide Sahel at Anvilton in Tigerspine Mountains will offer this quest after you complete your donkey quest. You have some planting to do (unless you plan to use the trading post). 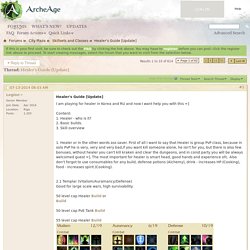 Healer - who is it? 2. Basic builds. 3. Skill overview 1. Healer or in the other words ass saver. The Cadence - North America - Elder Scrolls Online - Guild Hosting - Guild Launch. Fido's The Crop Report v2.0 - The Basics of Agriculture - New Articles & Guides - ArcheAge Source. I'll be translating and formatting Fido's original article in German which can be found here. 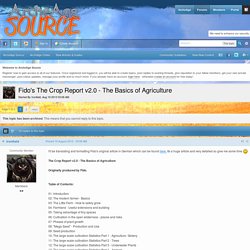 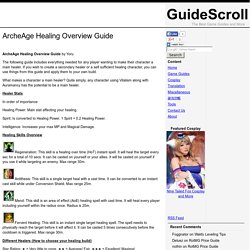 If you wish to create a secondary healer or a self sufficient healing character, you can use things from this guide and apply them to your own build. What makes a character a main healer? Quite simply, any character using Vitalism along with Auramancy has the potential to be a main healer. Healer Stats. ArcheAge Primeval Build, Keybinds and UI Guide. ArcheAge Primeval Build, Keybinds and UI Guide by Alderez I see a lot of people asking for this so I’ll go ahead and post my build, UI, Keybinds, and whatever other info people may want to know. First thing’s first: The build. Before you even think about building your class, Primeval or not, you should always have a solid build that you’re comfortable with. ArcheAge Healer’s Guide. ArcheAge Healer’s Guide by Legion I am playing for healer in Korea and RU and now I want help you with this =] Content: 1.

Healer – who is it? 2. ArcheAgeStatus.com - ArcheAge Server Status Monitoring. [Nuia] Gilda Stars: A Brief Guide : archeage. ArcheAgeStatus.com - ArcheAge Server Status Monitoring. The Most Viable ArcheAge Builds. October 14, 2014 by Memento Mori You are playing, or planning to play, ArcheAge and you still don’t know what class to play as? Here is a list of the most viable classes, sorted by their type, including Tanks, Melees, Mages, Archers, Healers, Support. Tanks While it is only optional, most of the viable tank builds will include the Defense skillset that not only give them more survivability, but also offers skills that allow them to taunt large groups of enemies.

Alchemy is a crafting trade skill focusing on creating potions, enhancements, crafting materials, and dyes. Alchemy is the only way to get some key items such as the clipper, galleon and tractor repair glasses. Whilst also offering some unique gear enchantments such as “threat generation” and increased “breathing time”. Alchemy is tough to level, especially at launch, requiring large amounts of farmed mats. The purpose of this guide is to easy that pain by; - Pointing out effective routes to levelling - What to craft for others - Taking into account money and time to grow mats. Spellsinger V2 - Level 55 Live Build + 50BuildInfo - Arche-Base. ArcheAge - The Most Viable and Popular Classes - ArcheAge - newmmos. Classes in ArcheAge. ArcheAge has unique class system where everything is based on skill sets. Right now there are 10 general skill sets in the game. FW Daily Quest. Farmer's Workstation - Husbandry, Farming, Logging, Gathering, Quest These quests are only for players that have Farmer's Workstation and daily quest.

ArcheAge Guide: How to Custom Logo. Source from. Spellsinger V2 - Level 55 Live Build + 50BuildInfo - Arche-Base. ArcheAge Instance Drops. Complete Healer Guide. ArcheAge Farming Guide - Efficient Tree Planting and Placement - ArcheAge. By Ashley SSS. Efficiently leveling Alchemy. ArcheAge Class Trees and Skills Descriptions (CBT5 English) - New Articles & Guides - ArcheAge Source. The Skill Trees:The active skills (11 of them) located on the left side and the passives (5 of them) on the right side. Calling This skill tree is for those who want to become assassins. Instant motion, go behind the targets back, excellent offensive skills, and self-buff passives to maximize the chance to kill the target, the ability to disappear from sight of the enemy.

Social Net Working in ArcheAge: An Intro Guide to Fishing. My hobby within my hobby, fishing in ArcheAge breaks new ground in my MMO playing history; for the first time in forever, I’m enjoying this fishing stuff. It caught me by surprise.