Stuff about my own Turtlebot (.eu)

Roomba_500_Open_Interface_Spec. Hacking Roomba. Roomba_Interface_Spec. Roomba - IsoBots. UPDATE: 03/2011The Airsoft Roomba has received a lot of attention since it's first build. 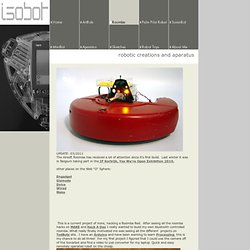 Last winter it was in Belgium taking part in the IF Kortrijk, Yes We're Open Exhibition 2010. other places on the Web "O" Sphere: EngadgetGizmodoDviceWiredMake This is a current project of mine, hacking a Roomba Red. After seeing all the roomba hacks on MAKE and Hack A Day I really wanted to build my own bluetooth controlled roomba. I own a Discovery roomba and use it in the never ending battle against dog hair. This is how it looked after the first modifications. Of the housing, only part left in place is the bumper. Front view with character marks from it's former life. I ordered a bluesmurf bluetooth module and antenna from Sparkfun and assembled a bluetooth interface board using the tutorial from Makezine.comI used a couple of pin sockets in order to use jumper wires to connect to the DIN socket on the roomba and for the cameras power circut.

Looks like iRobot is on to the same idea as me! HOW TO – Make a Roomba Serial Interface. Here’s how to make a serial cable to control a Roomba with your Mac/PC. iRobot Roomba manufactured after October 2005 contain an electronic and software interface that allows you to control or modify Roomba’s behavior and remotely monitor its sensors. 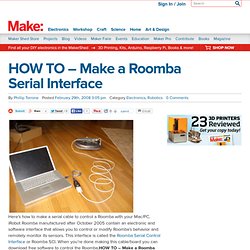 Roomba Serial Interface: schematic. Roomba 550 Review After 1 Year of Normal Use — Werty. I have had my eye on the Roomba for a while, and have read many reviews. 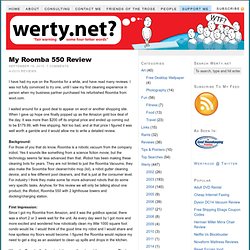 I was not fully convinced to try one, until I saw my first cleaning experience in person when my business partner purchased his refurbished Roomba from woot.com. I waited around for a good deal to appear on woot or another shopping site. When I gave up hope one finally popped up as the Amazon gold box deal of the day. It was more than $200 off its original price and ended up coming out to be $179.99, with free shipping. Not too bad, and at that price I figured it was well worth a gamble and it would allow me to write a detailed review. European Turtlebot. TurtleBot.eu. Roomba 564. Plexiglas + Kinect. Turtlebot Assembly. Got my Turtlebot on monday. 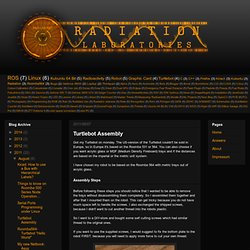 The US-version of the Turtlebot couldn't be sold in Europe, so in Europe it's based on the Roomba 531 or 564. You can also choose if you want acrylic glass or MDF (Medium Density Fireboard) trays and if the distances are based on the imperial or the metric unit system. I have chosen my robot to be based on the Roomba 564 with metric trays out of acrylic glass. Before following these steps you should notice that I wanted to be able to remove the trays without disassembling them completely.

So I assembled them together and after that I mounted them on the robot. So I went to a DIY-store and bought some self cutting screws which had similar thread to the original ones. If you want to use the supplied screws, I would suggest to fix the bottom plate to the robot FIRST, because you will need to apply more force to cut your own thread. Trays. Computer - Produktdetails ASUS EeePC VX6-WIH087M White. <p>0&nbsp;Article&nbsp;total value&nbsp;0,00&nbsp;&euro; | <a href="/basket.jsp">Warenkorb</a> | <a href="/order.jsp">Bestellen</a></p> <p class="note"><b>Attention:</b> JavaScript is deactivated. 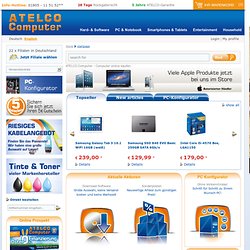 Some functions are not available. </p> Info-Hotline: 01805 - 11 51 52** 28 Tage Rückgaberecht 5 Jahre ATELCO-Garantie. My new Netbook: Asus Lamborghini eee PC VX6 for the Turtlebot. I ordered the Turtlebot from turtlebot.eu, but turtlebot.eu could not hold the price for the complete kit. 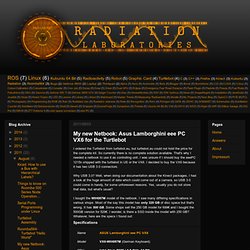 So currently there is no complete solution available. Robots/Roomba. ROS Software Maintainer: Gonçalo Cabrita, ISR University of Coimbra The Roomba is an autonomous vacuum cleaner sold by iRobot. 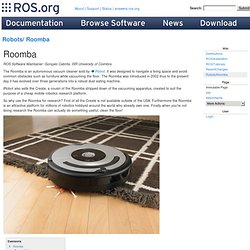 It was designed to navigate a living space and avoid common obstacles such as furniture while vacuuming the floor. Roomba564-Turtlebot "Hello World" If you want to test a Roomba561-based-Turtlebot you can do that with this launchfile and a joystick. 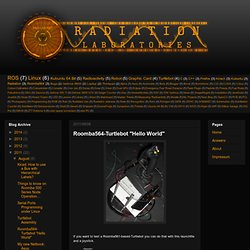 Joystick-Button 0 will be the deadman-button, but in a very strange way. It will not stop your robot when you let it loose, it will stop you from being able to control the robot and keep the current velocity, very odd behavior. Requires the following packages:joystick_drivers, roomba_500_series, turtlebot_teleop Another test I did while I didn't had a joystick in range: This launchfile enables you to control your robot with the buttons: [Q] Turn left [W] Drive forward [E] Turn right [S] Drive backward [Any other key] Stop This example requires: roomba_500_series, pr2_teleop Currently there is a problem with the joy node datatype in electric and unstable. Things to know on Roomba 500 Series Node Operation. 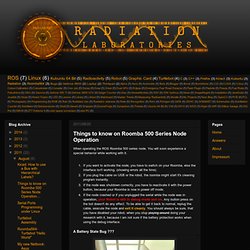 You will soon experience a special behavior while working with it.If you want to activate the node, you have to switch on your Roomba, else the Interface isn't working. (showing errors all the time)If you plug the cable on USB or the robot, the roomba might start it's cleaning program instantly.If the node was shutdown correctly, you have to reactivate it with the power button, because your Roomba is now in power off mode.If the node crashed or if you unplugged the serial while the node was in operation, your Robot is still in debug mode and on.