DEVICE 6 - Reveal Trailer. Year Walk - Trailer. Never Alone - Trailer - E3 2014. Gone Home Review. Reviewed on PC → August 15, 2013 One of the most rewarding moments of Gone Home , and any work of fiction for that matter, is when you take a jumbled mess of oddly shaped metaphorical puzzle pieces and finally put them together to resemble something familiar. This revelation sprang forth for me a few hours into my first-person walkabout through the Greenbriar household.

As I rummaged through an abandoned kitchen examining refrigerator notes, discarded paperback books, and surprisingly named bottles of salad dressing, the proverbial light bulb suddenly illuminated. Yes, I was exploring the Greenbriar home, a digital space where the first game by The Fullbright Company is set. But perhaps more importantly, I was exploring something strikingly similar to the house I grew up in. Throughout Gone Home, a first-person exploratory adventure game, you'll poke around a beautifully created house and examine the artifacts that populate each well-designed room, and everywhere you look the house. Video Game Soundtrack: Trusty Bell-Chopin No Yume: Music. Eye Candy: 2012's Most Beautiful Game Moments So Far. Video games are gorgeous, spectacular and often times striking pieces of art. They can be chaotic and bombastic celebrations of color and light one moment, and calm, minimalist slivers of serenity the next. Here are the most beautiful and inspiring gaming moments of the year so far, framed for your viewing pleasure.

Put on your headphones, raise a glass of wine (If you're old enough!) Most Beautiful Video Game Moments of 2013. By Brian Altano & Marty Sliva December 11, 2013 Beauty doesn't care about the console wars or resolution or whether or not something is a "game. " Beauty spans all platforms, genres, and tastes. From dystopian action games to pastel sequels to ambient walkabouts, video games have the ability to conjure joy in many different shapes. Risk of Death - An Indie Action Game. Download Game Current Rating 24 ratings Impression Posted By Chris Priestman 12/6/2013 It’s obvious, isn’t it? 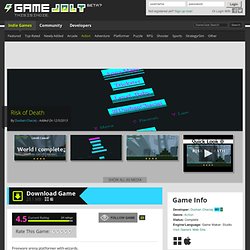 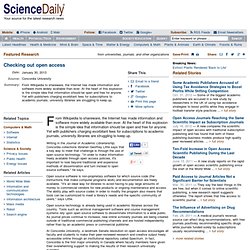 At the heart of this explosion is the simple idea that information should be open and free for anyone. Yet with publishers charging exorbitant fees for subscriptions to academic journals, university libraries are struggling to keep up. Writing in the Journal of Academic Librarianship, Concordia collections librarian Geoffrey Little says that a key way to meet that challenge is through the use of open source technology. "In order to make information freely available through open access policies, it's important to look beyond traditional and expensive methods of dissemination and turn instead to open source software," he says.

Open source software is non-proprietary software for which source code (the instructions that make computer programs work) and documentation are freely available. Open source technology is already being used in academic libraries across the country. The ecological badminton robot: Optimizing energy efficiency in machine design. A robot to play with! 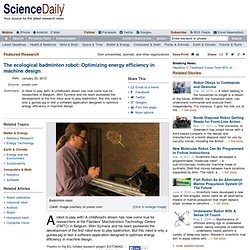 A childhood’s dream has now come true for researchers at the Flanders’ Mechatronics Technology Centre (FMTC) in Belgium. Wim Symens and his team pioneered the development of the first robot ever to play badminton. Engineers solve a biological mystery and boost artificial intelligence. By simulating 25,000 generations of evolution within computers, Cornell University engineering and robotics researchers have discovered why biological networks tend to be organized as modules -- a finding that will lead to a deeper understanding of the evolution of complexity. 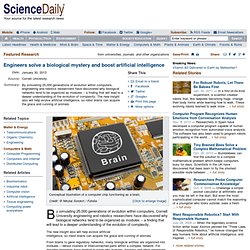 The new insight also will help evolve artificial intelligence, so robot brains can acquire the grace and cunning of animals. From brains to gene regulatory networks, many biological entities are organized into modules -- dense clusters of interconnected parts within a complex network. For decades biologists have wanted to know why humans, bacteria and other organisms evolved in a modular fashion. Like engineers, nature builds things modularly by building and combining distinct parts, but that does not explain how such modularity evolved in the first place. Renowned biologists Richard Dawkins, Günter P. "Once you add a cost for network connections, modules immediately appear. 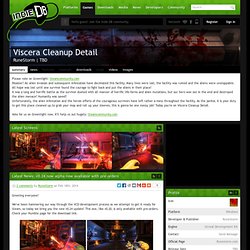 We've been hammering our way through the VCD development process as we attempt to get it ready for Steam, so today we bring you the new v0.24 update! This one, like v0.20, is only available with pre-orders. Check your Humble page for the download link. Changelog: Major: Save system (players can now save the game and return to it later)Plasma welder (patch up bullet holes, destroy objects, make a mess)64 bit exeImproved physics & networkingLots of fixes Game: