Who killed Detroit? The gaunt man was sitting on a bench in the overgrown park at the corner of Chene and Ferry streets in Detroit, drinking an Old Milwaukee tallboy he’d bought at a Yemeni party store, and trying to peddle an old point-and-shoot film camera for $3. 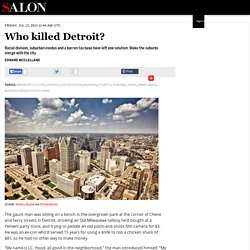 He was an ex-con who’d served 15 years for using a knife to rob a chicken shack of $81, so he had no other way to make money. “My name is J.C. Hood, all good in the neighborhood,” the man introduced himself. Detroit: first city to lose all of its white population? Michigan news, sports, cars, entertainment and commentary. As Detroit breaks down, scourge of arson burns out of control. Marilyn Salenger: ‘White flight’ and Detroit’s decline.

An almost palpable sadness has swept across the country at the news that the city of Detroit has filed for bankruptcy. White Flight - How Detroit Lost Its Way.