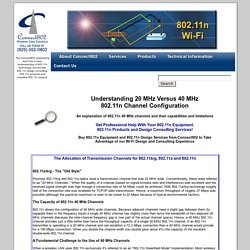 802.11h. What is the actual real-life speed of wireless networks ? There are many wireless standards in use today, and newer technologies can bond multiple channels/frequencies together to achieve higher throughput. 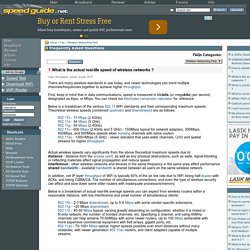 First, keep in mind that in data communications, speed is measured in kilobits (or megabits) per second, designated as kbps, or Mbps. You can check our bits/bytes conversion calculator for reference. Below is a breakdown of the various 802.11 WiFi standards and their corresponding maximum speeds. What every IT professional should know about 802.11n (Part 1) 802.11n is expected to be ratified later this year and to provide speeds of up to 600 Mbps, which is over ten times faster than the existing standards. 802.11n also has other benefits such as increased range and reliability over legacy standards. 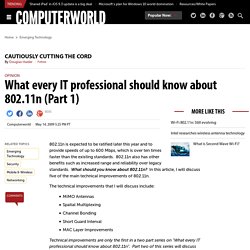 What should you know about 802.11n? In this article, I will discuss five of the main technical improvements of 802.11n. The technical improvements that I will discuss include: MIMO Antennas Spatial Multiplexing Channel Bonding Short Guard Interval MAC Layer Improvements. VLAN Pooling. What is poe plus. Private Pre-Shared Key (PPSK) What is a dfs channel. Network Policy Server. Network Policy and Access Services (NPAS)[1] is a component of Windows Server 2008. 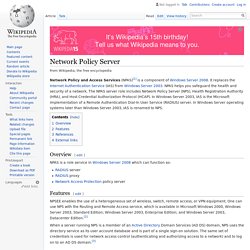 Overview[edit] NPAS is a role service in Windows Server 2008 which can function as: RADIUS serverRADIUS proxyNetwork Access Protection policy server Features[edit] NPSEE enables the use of a heterogeneous set of wireless, switch, remote access, or VPN equipment. References[edit] External links[edit] NPS on Microsoft TechNet. Cloud-enabled Self-Service Access Management. Aerohive ACSP. Once upon a time, wireless networks were completely the product of the person or persons who designed, installed, and configured them. 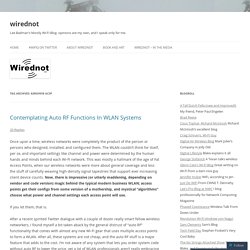 The WLAN couldn’t think for itself, per se, and important settings like channel and power were determined by the human hands and minds behind each Wi-Fi network. This was mostly a hallmark of the age of Fat Access Points, when our wireless networks were more about general coverage and less the stuff of carefully weaving high-density signal tapestries that support ever increasing client device counts. Now, there is impressive (or utterly maddening, depending on vendor and code version) magic behind the typical modern business WLAN; access points get their configs from some version of a mothership, and mystical “algorithms” choose what power and channel settings each access point will use. If you let them, that is. I think this is some of the essence of skepticism behind auto RF from my wireless homies.

Thanks for reading! WiFi Frequency Bands List. - Wi-Fi / WLAN / 802.11 channels, their channel frequencies and bandwidth allocations around the globe, spectral mask and summary of which channels can be used together for WLAN solutions. 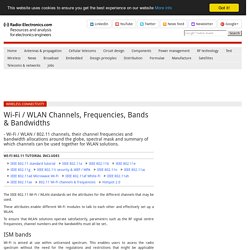 The IEEE 802.11 Wi-Fi / WLAN standards set the attributes for the different channels that may be used. These attributes enable different Wi-Fi modules to talk to each other and effectively set up a WLAN. To ensure that WLAN solutions operate satisfactorily, parameters such as the RF signal centre frequencies, channel numbers and the bandwidths must all be set.. ISM bands Wi-Fi is aimed at use within unlicensed spectrum. There are a number of unlicensed spectrum bands in a variety of areas of the radio spectrum. The main bands used for carrying Wi-Fi are those in the table below: SSID Overhead Calculator — Revolution Wi-Fi.

6 Dynamic%20Frequency%20Selection%20and%20the%205GHz%20Unlicensed%20Band. Cisco's top 10 rivals. Competition is only getting tougher for Cisco as it continues to expand in 30 or so new markets while attempting to maintain growth in its core routing and switching businesses. 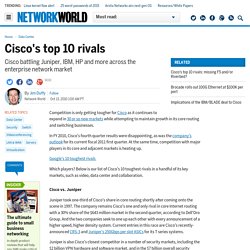 In FY 2010, Cisco's fourth quarter results were disappointing, as was the company's outlook for its current fiscal 2011 first quarter. At the same time, competition with major players in its core and adjacent markets is heating up. Google's 10 toughest rivals Which players? Below is our list of Cisco's 10 toughest rivals in a handful of its key markets, such as video, data center and collaboration. Cisco vs. Juniper took one-third of Cisco's share in core routing shortly after coming onto the scene in 1997. Juniper is also Cisco's closest competitor in a number of security markets, including the $2 billion VPN hardware and software market, and in the $7 billion overall security market, which includes firewalls, VPNs, unified threat management and intrusion detection and prevention systems, according to IDC.