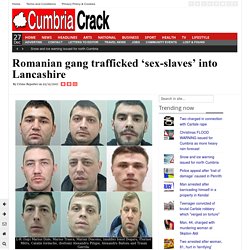 NINE men have today been sentenced for their roles in trafficking and exploiting Romanian women for prostitution. The investigation began in June 2016 when an address on St Barnabas Street, Blackburn, was visited by the police in connection with reports that the premises were being used as a brothel. Following the police interest the gang, run by Florinel Razvan Mitru, started to advertise on websites for “out calls” where the females go to the clients at hotels or other addresses. Over the course of the operation the police amassed a large body of material implicating the defendants in the running and trafficking of prostitutes. The men were arrested in a series of raids across the country in April. A number of women have been safeguarded as part of the investigation. Offender details. Workington MP demands mental health investigation from PM.

Sue Hayman MP Sue Hayman, Member of Parliament for Workington, has today written to Theresa May, the Prime Minister, asking her to instigate an investigation into the provision of mental health services in Cumbria, following shocking reports that 59 people in the last year were transferred out of the county to receive mental healthcare. 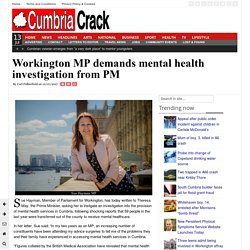 Incredible Advantages Of Finding Local News Online. The newspaper was come into existence for updating the people about happenings worldwide. 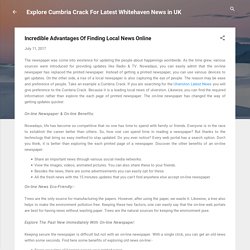 As the time grew, various sources were introduced for providing updates like Radio & TV. Nowadays, you can easily admit that the on-line newspaper has replaced the printed newspaper. Instead of getting a printed newspaper, you can use various devices to get updates. On the other side, a rise of a local newspaper is also capturing the eye of people. The reason may be ease and preference of people. Killed in the line of duty – Carlisle PC murdered attempting to apprehend notorious gang. PC Joseph Byrnes memorial On 27 October 1885 four notorious criminals burgled Netherby Hall, a large stately home a few miles from Carlisle and stole valuable jewellery. 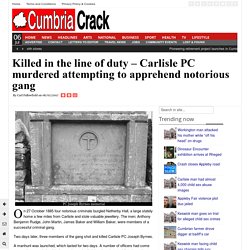 The men; Anthony Benjamin Rudge, John Martin, James Baker and William Baker, were members of a successful criminal gang. Two days later, three members of the gang shot and killed Carlisle PC Joseph Byrnes. A manhunt was launched, which lasted for two days. A number of officers had come across the gang during this time and were badly injured or shot at whilst attempting to apprehend them, but it was on 29 October 1885 that they murdered PC Byrnes in cold blood. Fatest White-haven News from Cumbria Crack. Wisconsin Historical Society. Veteran of Civil War | Newspaper Article/Clipping | Wisconsin Historical Society Newspaper Article/Clipping Wisconsin Local History & Biography Articles Headline: Veteran of Civil War Main Heading: Civil War Sub Heading: Biography. 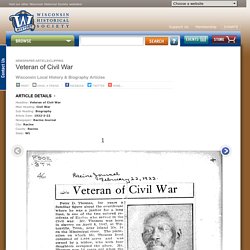 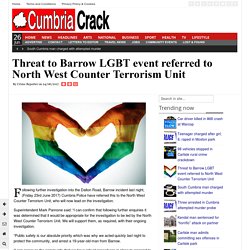 Superintendent Mark Pannone said: “I can confirm that following further enquiries it was determined that it would be appropriate for the investigation to be led by the North West Counter Terrorism Unit. We will support them, as required, with their ongoing investigation. “Public safety is our absolute priority which was why we acted quickly last night to protect the community, and arrest a 19-year-old man from Barrow. “I can reassure the community that we have robust procedures in place to respond to reports of suspicious activity and we will continue to work closely with our local communities to help keep Cumbria safe. 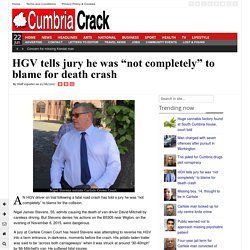 AN HGV driver on trial following a fatal road crash has told a jury he was “not completely” to blame for the collision. Nigel James Stevens, 55, admits causing the death of van driver David Mitchell by careless driving. But Stevens denies his actions on the B5305 near Wigton, on the evening of November 6, 2015, were dangerous. A jury at Carlisle Crown Court has heard Stevens was attempting to reverse his HGV into a farm entrance, in darkness, moments before the crash. 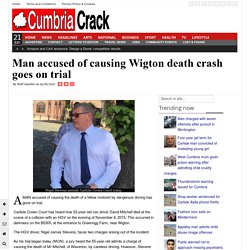 A MAN accused of causing the death of a fellow motorist by dangerous driving has gone on trial. Carlisle Crown Court has heard how 53-year-old van driver David Mitchell died at the scene of a collision with an HGV on the evening of November 6, 2015. This occurred in darkness on the B5305, at the entrance to Greenrigg Farm, near Wigton. The HGV driver, Nigel James Stevens, faces two charges arising out of the incident. Get Online Ulverston Latest News From Cumbria crack:​ A local News Portal – Latest News On Cumbria Crack. Most of the people have involved the internet in their life to know everything and to do anything. 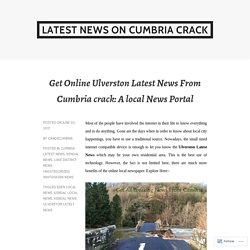 Gone are the days when in order to know about local city happenings, you have to use a traditional source. Nowadays, the small sized internet compatible device is enough to let you know the Ulverston Latest News which may be your own residential area. This is the best use of technology. However, the fact is not limited here, there are much more benefits of the online local newspaper. Road closed and properties evacuated as chemicals removed from address in Ulverston. Lake District route improved for all abilities. Walkers enjoying the Glebe to Cockshott Point path. 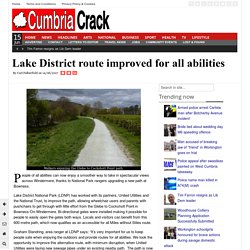 People of all abilities can now enjoy a smoother way to take in spectacular views across Windermere, thanks to National Park rangers upgrading a new path at Bowness. Lake District National Park (LDNP) has worked with its partners, United Utilities and the National Trust, to improve the path, allowing wheelchair users and parents with pushchairs to get through with little effort from the Glebe to Cockshott Point in Bowness-On-Windermere.

Bi-directional gates were installed making it possible for people to easily open the gates both ways. Locals and visitors can benefit from this 600 metre path, which now qualifies as an accessible for all Miles without Stiles route. Graham Standring, area ranger at LDNP says: “It’s very important for us to keep people safe when enjoying the outdoors and provide routes for all abilities. White-haven News Online In UK. Embed Code Embeded for hosted site: Click the code to copy. Man jailed for Kendal knife crime. Labour hold Workington. Conservative hold Carlisle. Science Extravaganza at The Beacon Museum. Pupils from Distington Community School craft their sea vessel alongside Margaret Crichton, Senior Teaching Assistant.

A SCIENTIFIC extravaganza was held at The Beacon Museum today (Wednesday). Over 80 children from local schools, Distington Community and Seascale Primary attended the event at the Whitehaven museum alongside Prism Arts Studio Theatre Members. Atomic Day launched a two-year Heritage Lottery Funded project, entitled ‘Cumbria’s Atomic Story – a Fusion of People and Place.’ The project is led by Prism Arts and supported by heritage partner The Beacon Museum, Sellafield Ltd and National Nuclear Laboratory (NNL). Lucy-Jo Worthington and Derren Lynch, Distington Community School pupils working to together to try and create a boat that can withstand a tsunami. Teenager locked up for plotting to supply class A drugs to Kendal users. Connor Owens A TEENAGER who plotted to supply class A drugs to users in Kendal has been locked up for 40 months. Connor Owens, 19, was caught red-handed by police who swooped on a town hotel in which he was staying in early May. Officers found him in his room with 100 wraps of crack cocaine and scores of single heroin deals.

These had a total street level value of £1,740. Almost £700 cash was located in the jacket of Owens, who was also surrounded by plastic packaging. Crucially, Carlisle Crown Court heard, a mobile phone was found in Owens’ possession. Benefits of Reading Online News On Cumbria crack​? – Latest News On Cumbria Crack. The newspaper is the easiest method to know about the biggest happening around the globe. On the other side, the local newspaper like Cumbria crack offers the latest information about the local towns including Whitehaven News, Ulverston, Penrith, Lake District Hotels News, etc. This is really a useful fact that let us know what is happening in small towns and cities located at your nearby. Subsequently, an online presence of a news company brings many benefits for the users.

Sentence increased for Kirkby Stephen child sex offender. Christopher Hodder A child sex offender from Kirkby Stephen has had his prison sentenced increased following a hearing at the Court of Appeal. Christopher Hodder, aged 31, of Union Square, Kirkby Stephen, was originally sentenced at Carlisle Crown Court in March for four years. On Friday 26th May, the Court of Appeal extended the sentence to eight years and four months. Hodder will spend five years and four months in custody and the remaining three years on an extension period. The sentencing was in relation to the following offences: Scientists reveal: Cumbria’s Floodplains face uncertain future. 90% of floodplains across the country have been so severely changed that they no longer work properly, according to a new report, released today by Co-op Insurance and The University of Salford.

Having been on the ground in the aftermath of Storm Desmond, which disrupted five thousand homes and hundreds of communities, Co-op Insurance has seen first-hand the impact floods can have on lives. Funders dig deep for Eden’s annual food fest. With plans for the Eden Food and Farming Festival in full swing, the organisers thanked the funders of this year’s festival in Penrith this week. Hedgehogs recorded as part of inner city wildlife scheme. Police appeal after woman racially abused on Carlisle bus. Workington man accused of raping "sleeping" woman goes on trial.

Flying Scotsman in Carlisle. 4shared.com - free file sharing and storage - Document Preview - text. Cumbria Crack: Breaking News Penrith, Cumbria, Carlisle, Lake District. Why You Should Prefer Online Newspaper To Get White-haven News ? – Latest News On Cumbria Crack. Newspaper is the most easiest and convenient way to get information about the most recent happenings around the world. If you want to get local news, there are various news site which provides local news specifically. For example, Cumbria Crack, it is a great source if you want to get all the latest news about local places like Whitehaven, Penrith, Kendal, Ulverston, etc in Cumbria region.

It is very useful if you know what is happening in the small towns and cities in the nearby region. To get all the latest White-haven news, a local newspaper like CumbriaCrack is a great option. It is a really useful fact to know what all is happening in the cities and small towns around us. Cumbria Crack: Breaking News Penrith, Cumbria, Carlisle, Lake District. Read Fastest And Breaking News Online. Growing use of internet has transformed the way we used to view news. Live News Headlines Cumbria- Get Updated with Headlines. Cumbria Crack: Get Latest White-haven News Online in UK. Cumbria Crack - The Whole New Place For Kendal's... Cumbria Crack Online Newspaper – Quick Access To Business Updates – Latest News On Cumbria Crack. Keep the updates about what is happening around you is necessary. Online News Is Best To Save Time And Money – Latest News On Cumbria Crack. Live News Headlines Cumbria, Penrith, Carlisle, Lake District, Kendal. Amazing Facts Of Rising Cumbria-crack Online...