Cuelogic is a tech company with offices in US, India and Australia. We provide leading edge startups across the globe as well as with Fortune 500 enterprises. We are having expertise in Custom Software Development, Cloud Computing Services, IoT Services and Data Analytics Services. Our partners include high growth startups, SMEs and Fortune 500 enterprises. know more:

How Fast Data Powering your Real Time Big Data. Outsourcing Software Development for Innovation. What to keep In house and what to Offshore. Challenges in Growth of Big Data Services. Challenges in Growth of Big Data Services. Offshore software development company. Big Data Consulting. Why has Node.Js become a gold standard for Enterprise Web Apps? Node.js is a JavaScript runtime environment for building robust web applications. 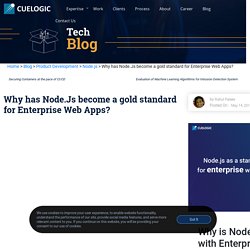 It is an efficient and lightweight platform which comes out-of-the-box with the bare essentials or modules like npm, install, uninstall, update which are necessary for developing scalable apps. Node.js can be extended using third-party modules for creating feature-rich enterprise web applications due to the vast ecosystem that is built around it. How a browser processes JS code? A browser has an in-built JS engine within its runtime environment to process JS code. You would write document.getElementById(‘’); for picking an element using the DOM. How Node.js processes JS code Node.js Development incorporates Chrome’s V8 engine and embeds it inside a C++ program. Few examples not possible on a browser: Commands like fs.readFile() let you work with a file system.

You can listen for requests on a given port using http.createServer(). The Complete Guide to DevOps (With Examples) DevOps Solutions and Services Provider. NodeJs App Development Company. Istio Service Mesh: The Step by Step Guide. Role of Python in Artificial Intelligence. The Complete Guide to DevOps (With Examples) Top 3 Best JavaScript Frameworks for 2019. Amazon Reinvent in 4 mins : Top 8 things you should know. Azure Cosmos DB: A Guide to Microsoft’s Database Service. NodeJs App Development Company. DevOps Solutions and Services Provider. The A to Z Guide to Angular Lifecycle. Angular is a prevalent, broadly used client-side platform that has won millions of developer’s hearts in recent years. 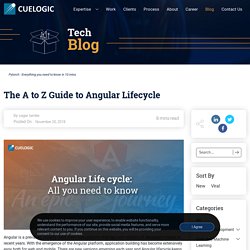 With the emergence of the Angular platform, application building has become extensively easy both for web and mobile. There are new versions emerging each year and Angular lifecycle keeps on evolving. The platform was introduced by Google back in 2009. AngularJS the first initiative by the Angular team was extensively popular and was dependent on HTML and JavaScript. However, in the later versions, you can find that JavaScript got replaced by TypeScript and other modern scripting languages. Angular has given the developers the freedom to develop applications that can run on web, mobiles, and desktop. Each Angularjs version goes through various phases in its lifecycle. Components are the primary building block for any Angular version. When an Angular component gets initialized, it creates and presents its root components. Lifecycle hook overview Constructor versus OnInt. Kubernetes vs Docker Swarm -  A Comprehensive Comparison.

Containers have become quite popular in recent years. 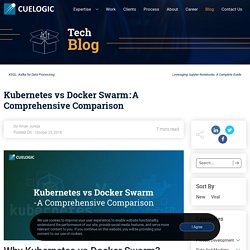 They help developers maintain consistency across various platforms, right from development to the production process. Although there are multiple significant in the market when it comes to container orchestration, including Mesosphere and Amazon ECS, this blog aims to take a comparative look at two of the popular ones — Kubernetes vs Docker Swarm. What is Kubernetes? Kubernetes has been developed by Google and it was introduced in the year 2014. In essence, it is an IT management tool that has been specifically designed to simplify the scalability of workloads using containers. By using Kubernetes, you will be able to define how your applications should run and the manner in which they interact with other applications.

Although Kubernetes was known to be highly complex in the past, various tools and upgrades have gradually made it more user-friendly. Clusters in Kubernetes include several components like: What is Docker Swarm? Angular vs. React vs. Vue: A 2018 Comparison (Updated) - Cuelogic. There is no denying the fact that the virtual world of web development has been on a thriving technological ride in the past decade. 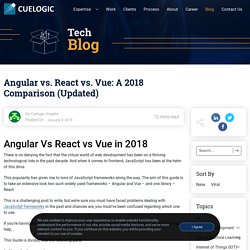 And when it comes to frontend, JavaScript has been at the helm of this drive. This popularity has given rise to tons of JavaScript frameworks along the way. The aim of this guide is to take an extensive look two such widely used frameworks – Angular and Vue – and one library – React. This is a challenging post to write, but we’re sure you must have faced problems dealing with JavaScript frameworks in the past and chances are, you must’ve been confused regarding which one to use. If you’re having trouble deciding between Angular, React or the new kid in the block, Vue, we’re here to help. This Guide is divided into the following parts – 1. If you want to read it later, you can download an easy to digest PDF version here – Alright, so let’s cut to the chase and compare the three below. 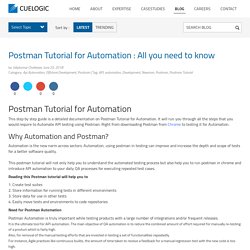 It will run you through all the steps that you would require to Automate API testing using Postman. Right from downloading Postman from Chrome to testing it for Automation. Why Automation and Postman? Automation is the new norm across sectors. Automation, using postman in testing can improve and increase the depth and scope of tests for a better software quality. Postman Tutorial for Automation : All you need to know.