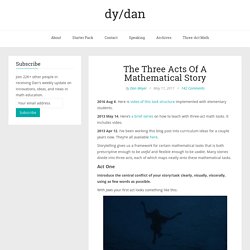 Here is video of this task structure implemented with elementary students. 2013 May 14. Here’s a brief series on how to teach with three-act math tasks. It includes video. 2013 Apr 12. Storytelling gives us a framework for certain mathematical tasks that is both prescriptive enough to be useful and flexible enough to be usable. Act One Introduce the central conflict of your story/task clearly, visually, viscerally, using as few words as possible.

With Jaws your first act looks something like this: The visual is clear. Theconversation. A common view is that students learn maths best when teachers give clear explanations of mathematical concepts, usually in isolation from other concepts, and students are then given opportunities to practise what they have been shown. 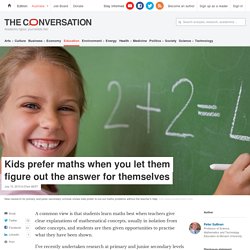 I’ve recently undertaken research at primary and junior secondary levels exploring a different approach. This approach involves posing questions like the following and expecting (in this case, primary level) students to work out their own approaches to the task for themselves prior to any instruction from the teacher: The minute hand of a clock is on two, and the hands make an acute angle.

What might be the time? There are three ways that this question is different from conventional questions. Second, the question has more than one correct answer. Old school or new? Math teachers debate best methods as Canadian scores fall. Don’t get math teachers started on best teaching practices. 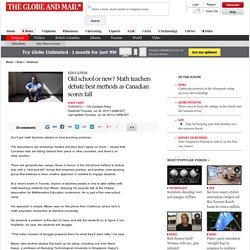 The discussions are emotional, heated and they don’t agree on much – except that Canadian kids are falling behind their peers in other countries, and there’s no clear solution. There are generally two camps: those in favour of the old-school method to lecture kids with a “drill-and-kill” format that preaches practice, and another, ever-growing group that believes a more creative approach is needed to engage students. At a recent event in Toronto, dozens of teachers waited in line to take selfies with math-teaching celebrity Dan Meyer, delaying his keynote talk at the Ontario Association for Mathematics Education conference. Learn math without fear, Stanford expert says. Stanford Report, January 29, 2015 Stanford Professor Jo Boaler says that students most effectively learn "math facts" working on problems that they enjoy, rather than through exercises and drills they fear. 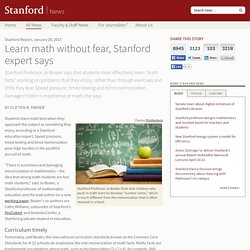 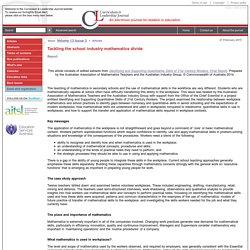 Prepared by the Australian Association of Mathematics Teachers and the Australian Industry Group, © Commonwealth of Australia 2014. The teaching of mathematics in secondary schools and the use of mathematical skills in the workforce are very different. &apos;Fraction Phobia&apos;: The Root of Math Anxiety? Over the past year, since I took over the common-core math beat, I've been thinking a lot about fractions. 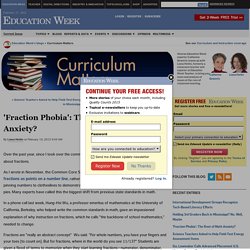 As I wrote in November, the Common Core State Standards for mathematics emphasize fractions as points on a number line, rather than just parts of a whole. Now, more teachers are pinning numbers to clotheslines to demonstrate fractions rather than divvying pizzas and fruit pies. Many experts have called this the biggest shift from previous state standards in math. In a phone call last week, Hung-Hsi Wu, a professor emeritus of mathematics at the University of California, Berkeley, who helped write the common standards in math, gave an impassioned explanation of why instruction on fractions, which he calls "the backbone of school mathematics," needed to change. LockhartsLament.pdf. Online publication for school educators. As a mathematics educator I have worked with many students suffering from mathematics anxiety. 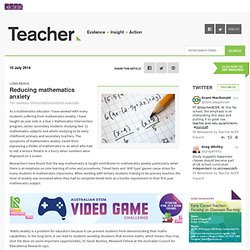 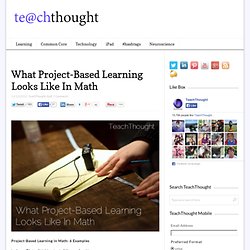 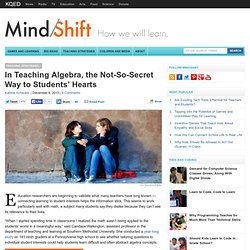 This seems to work particularly well with math, a subject many students say they dislike because they can’t see its relevance to their lives. Case Study -  I cancelled math classes! - Home. Curriki - Open Educational Resources. Traditionally one of the loathsome subjects, math is often a stumbling block for students. 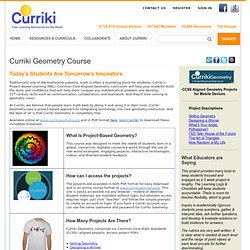 Curriki’s Project-Based Learning (PBL), Common Core Aligned Geometry curriculum will help your students build the skills and confidence that will help them conquer any mathematical problem and develop 21st century skills such as communication, collaboration, and teamwork. And they’ll love coming to geometry class! At Curriki, we believe that people learn math best by doing it and using it in their lives.

Curriki Geometry uses a project-based approach to integrating technology into core geometry instruction. And the best of all is that Curriki Geometry is completely free. Available online at www.currikigeometry.org and in PDF format here. Selling Geometry Project This project introduces students to a brief history of geometry, geometric terms, geometric shapes, and transformation and manipulation of shapes through reflections, tessellations, and dilations. Designing a Winner Project.

Dan Meyer: Math class needs a makeover. About EDUC115N. About This Course You can now register for the current offering of this course. No math gene: Learning mathematics takes practice. New research from the Norwegian University of Science and Technology shows that if you want to be good at math, you have to practice all different kinds of mathematics. What makes someone good at math? A love of numbers, perhaps, but a willingness to practice, too.

And even if you are good at one specific type of math, you can't trust your innate abilities enough to skip practicing other types if you want to be good. New research at the Norwegian University of Science and Technology (NTNU) in Trondheim could have an effect on how math is taught. If you want to be really good at all types of math, you need to practice them all.