Exploring Cleopatra's Sunken Palace - Photo 1 - Pictures. A diver inspects a quartzite block with an engraving of a Pharaoh (indicated by hieroglyphic inscriptions as Seti I, father of Ramses II) on the seabed of the harbor of Alexandria, Egypt. 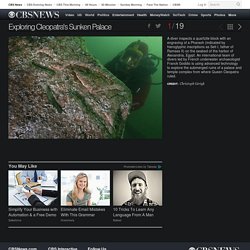 An international team of divers led by French underwater archaeologist Franck Goddio is using advanced technology to explore the submerged ruins of a palace and temple complex from where Queen Cleopatra ruled. Credit: Christoph Gerigk Alexandria's Royal Quarters - ports, a cape and islands full of temples, palaces and military outposts - simply slid into the sea after cataclysmic earthquakes in the fourth and eighth centuries. The harbor was abandoned and left untouched as an open bay, while modern construction went forward in the Western Harbor, leaving the ancient Portus Magnus undisturbed. Divers Explore Sunken Ruins of Cleopatra's Palace.

- The ruins of Cleopatra's palace and temple complex are sunken in waters off Alexandria. - Topographical surveys have allowed underwater archaeologists to conquer the harbor's poor visibility. - Divers are finding stunning artifacts, including coins, a statuette of a pharaoh and tiny amulets. 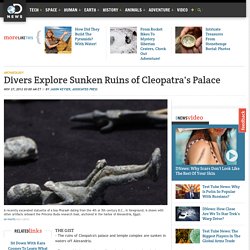 Plunging into the waters off Alexandria Tuesday, divers explored the submerged ruins of a palace and temple complex from which Cleopatra ruled, swimming over heaps of limestone blocks hammered into the sea by earthquakes and tsunamis more than 1,600 years ago. The international team is painstakingly excavating one of the richest underwater archaeological sites in the world and retrieving stunning artifacts from the last dynasty to rule over ancient Egypt before the Roman Empire annexed it in 30 B.C. "It's a unique site in the world," said Goddio, who has spent two decades searching for shipwrecks and lost cities below the seas. "We have this as an open field for archaeology," Goddio said. Cleopatra Facts For Kids. Cleopatra and Famous Queens There have been some amazing, fearless and brave queens over the ages that have changed history forever. 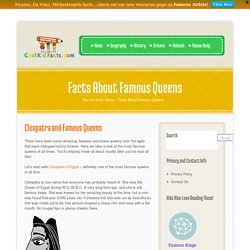 Here we take a look at the most famous queens of all times. You’ll certainly know all about royalty after you’ve read all this! Let’s start with Cleopatra of Egypt – definitely one of the most famous queens of all time. Cleopatra is one name that everyone has probably heard of. Amazingly Cleopatra came from a Greek heritage and she wasn’t truly Egyptian, but she did speak the language which meant the people ‘forgave’ her. She came into power at the tender age of 12. She married 2 of her brothers during her lifetime. Cleopatra had one son by Caesar but he was already married so as custom would have it she had to marry her brother. You could see her from a mile away because of the make she wore around her eyes. Apparently she owned a perfume factory. Very sadly the love of her life Mark Antony committed suicide.

Queen Anne Boleyn of England Anne loved animals! Cleopatra for Kids-the last Egyptian Queen-mrdowling.com. The life of the last Queen of Egypt is a story of love, greed, and romance. 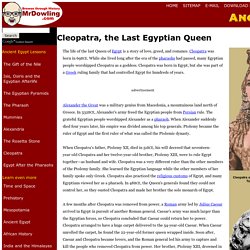 Cleopatra was born in 69BCE. While she lived long after the era of the pharaohs had passed, many Egyptian people worshipped Cleopatra as a goddess. Cleopatra was born in Egypt, but she was part of a Greek ruling family that had controlled Egypt for hundreds of years. advertisement Alexander the Great was a military genius from Macedonia, a mountainous land north of Greece. When Cleopatra’s father, Ptolemy XII, died in 51BCE, his will decreed that seventeen-year-old Cleopatra and her twelve-year-old brother, Ptolemy XIII, were to rule Egypt together—as husband and wife. A few months after Cleopatra was removed from power, a Roman army led by Julius Caesar arrived in Egypt in pursuit of another Roman general.

Advertisement Egyptian law did not allow their queen to rule without a king from the Ptolemy family, so Cleopatra married another brother, this one named Ptolemy XIV, though she was in love with Caesar. Cleopatra Facts. Ancient Egyptian Biography for Kids: Cleopatra VII. History >> Biography >> Ancient Egypt for Kids Occupation: Pharaoh of Egypt Born: 69 BC Died: August 30, 30 BC Best known for: The last pharaoh of Ancient EgyptBiography: Born a Princess Cleopatra was born a princess of Egypt. 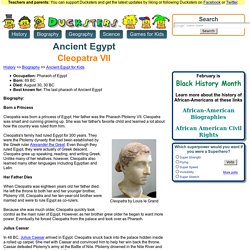 Her father was the Pharaoh Ptolemy VII. Cleopatra was smart and cunning growing up. Cleopatra's family had ruled Egypt for 300 years. Her Father Dies When Cleopatra was eighteen years old her father died. Because she was much older, Cleopatra quickly took control as the main ruler of Egypt. Julius Caesar In 48 BC, Julius Caesar arrived in Egypt. Ruling as Pharaoh. Cleopatra: Egypt's Last Pharaoh. Cleopatra: Egypt's Last Pharaoh Part 1: The Early Years Hers is one of the most recognizable names in all of human history. 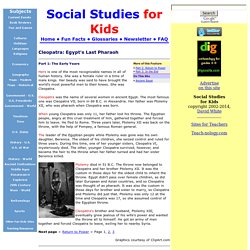 She was a female ruler in a time of male kings. Her beauty was said to have brought the world's most powerful men to their knees.