How 3D Printing is being used in Schools

What Is 3D Printing and How Does It Work? What is 3D printing? - Explanations - How it works - Industrial - Personal. What Can 3D Printing Do? Here Are 6 Creative Examples. Airwolf 3D printer / Image: Wikipedia 3D printing has been used to create car parts, smartphone cases, fashion accessories, medical equipment and artificial organs. 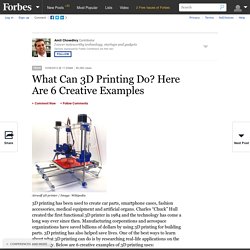 Charles “Chuck” Hull created the first functional 3D printer in 1984 and the technology has come a long way ever since then. These Kids Are 3D-Printing Their Education. A group of junior high and high school students in Cambridge, Mass., are part of an experimental education program that aims to prove they’re capable of solving real-world problems early with the help of 3D printers, Arduino and group collaboration. 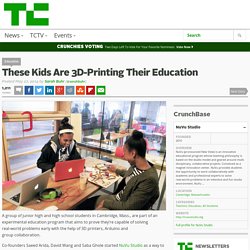 Co-founders Saeed Arida, David Wang and Saba Ghole started NuVu Studio as a way to apply their dissertation theory, which claims that kids as young as 13 are capable of working on design and engineering projects normally reserved for those at the master’s level. By the looks of several projects involving medical devices, a game that helps you lose weight and a modular telepresence robot you can control from far away, the theory seems to be correct. The program integrates several engineering and design principles. But Arida says that when he frames it to prospective students as something of a creative-learning program instead of as an engineering or math-oriented one, everyone gets excited. “We actually don’t go into an emphasis on engineering. 3D printers in schools: uses in the curriculum Enriching the teaching of STEM and design subjects Contents.

The 3D printer project In 2012-13, the Department for Education (DfE) funded a small 3D printer project toexplore the potential for use of 3D printers to enrich teaching across STEM (science,technology, engineering and mathematics) and design subjects. 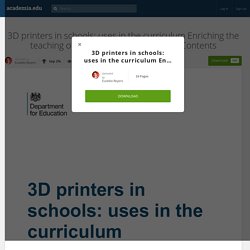 In particular, schoolswere asked to explore innovative ways of using the technology to help teach morecomplex scientific and mathematical ideas. This report outlines what was learnt from theproject.The twenty-one schools which took part in the project were: Three_Dimensional_Printing_Resouces_AArias.pdf. 10 Ways 3D Printing Can Be Used In Education [Infographic]

How 3D Printing Works 3D printing sounds like something from science fiction, but the process is similar to that of CNC machining, where billets are cut into specific shapes and products. 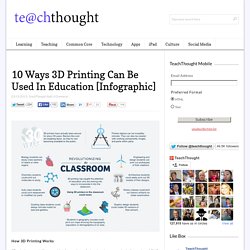 But rather than cutting, it prints. A 3D printer works by “printing” objects–but instead of using ink, it uses more substantive materials–plastics, metal, rubber, and the like. It scans an object–or takes an existing scan of an object–and slices it into layers it can then convert into a physical object. The result is a product that while not as intricate, durable, or functional as the real-world equivalent, is otherwise a real thing that didn’t exist 30 seconds before you printed it.

Importance of 3D Printing in Education. 3D printing is a technology that allows users to turn any digital file into a three dimensional physical product. 3D printing also allows for massive customization and unlike with music and movies, everything that is printed is protected by copyright. 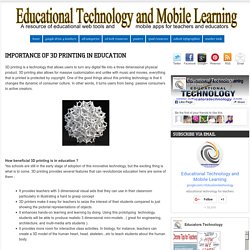 One of the good things about this printing technology is that it changes the dynamic of consumer culture. In other words, it turns users from being passive consumers to active creators. 3D Printers for Schools, Universities & Education. To prepare students for STEAM careers that value critical thinking over procedure and recall, educators are embracing teaching strategies like Project-Based Learning that require sustained engagement. 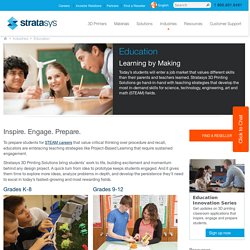 Stratasys 3D Printing Solutions bring students' work to life, building excitement and momentum behind any design project. A quick turn from idea to prototype keeps students engaged. And it gives them time to explore more ideas, analyze problems in-depth, and develop the persistence they'll need to excel in today’s fastest-growing and most rewarding fields. Grades K-8 Inspire interest in STEAM subjects early and often by empowering students to bring their ideas to life.Learn More Technical Schools Provide the essential skills and academic knowledge needed to succeed in today's most in-demand careers.Learn More Research.

5 Potential Future Applications of 3D Printing Within the Aerospace Industry. Like many industries, the aerospace industry is increasingly adopting 3D printing and rapid prototyping technologies to develop aircraft parts in the pursuit of trimming down manufacturing costs. 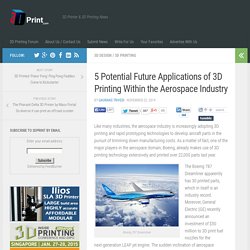 As a matter of fact, one of the major players in the aerospace domain, Boeing, already makes use of 3D printing technology extensively and printed over 22,000 parts last year. Boeing 787 Dreamliner The Boeing 787 Dreamliner apparently has 30 printed parts, which in itself is an industry record. Moreover, General Electric (GE) recently announced an investment of $50 million to 3D print fuel nozzles for the next-generation LEAP jet engine. The sudden inclination of aerospace industry towards additive manufacturing is mainly due to the possibility to achieve significant weight reduction.

Vivek Saxena, VP of Aerospace Operations at technology consulting company ICF International, said that additive manufacturing currently accounts for as low as 0.0002% of the worldwide manufacturing market. 11 Amazing Ways People Are Using 3D Printers For Good, Not Guns. Even though anyone willing to shell out $850,000 on a 3D metal printer can now produce fully functioning guns in the legal comfort of their own home, it's not time to cry foul on the emerging technology. 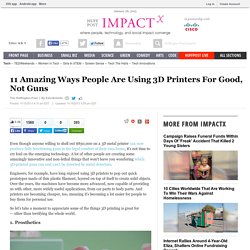 A lot of other people are creating some amazingly innovative and non-lethal things that won't leave you wondering which 3D-printed guns can and can't be detected by metal detectors. Engineers, for example, have long enjoyed using 3D printers to pop out quick prototypes made of thin plastic filament, layered on top of itself to create solid objects. Over the years, the machines have become more advanced, now capable of providing us with other, more widely useful applications, from car parts to body parts. And printers are becoming cheaper, too, meaning it's becoming a lot easier for people to buy them for personal use. So let's take a moment to appreciate some of the things 3D printing is great for -- other than terrifying the whole world. 1. 2. 3. (YouTube) 4. 5. (YouTube) 6. 7. 8. 9. 10.