Animated Bézier Curves. Play with the control points to modify the curves! 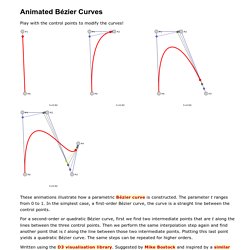 These animations illustrate how a parametric Bézier curve is constructed. The parameter t ranges from 0 to 1. In the simplest case, a first-order Bézier curve, the curve is a straight line between the control points. For a second-order or quadratic Bézier curve, first we find two intermediate points that are t along the lines between the three control points. Then we perform the same interpolation step again and find another point that is t along the line between those two intermediate points. Written using the D3 visualisation library. Requires a SVG-capable browser e.g. 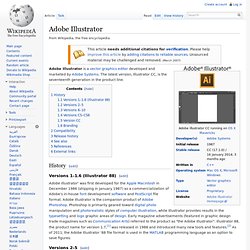 The latest version, Illustrator CC, is the seventeenth generation in the product line. History[edit] Versions 1–1.6 (Illustrator 88)[edit] Adobe Illustrator' was first developed for the Apple Macintosh in December 1986 (shipping in January 1987) as a commercialization of Adobe's in-house font development software and PostScript file format. Adobe Illustrator is the companion product of Adobe Photoshop. Versions 2–5[edit] Versions 6–10[edit] Adobe Illustrator 10, The last version before the Creative Suite Rebrand With the introduction of Illustrator 6 in 1996, Adobe made critical changes in the user interface with regard to path editing (and also to converge on the same user interface as Adobe Photoshop), and many users opted not to upgrade. With true ports of the Macintosh versions to Windows starting with version 7 in 1997, designers could finally standardize on Illustrator. 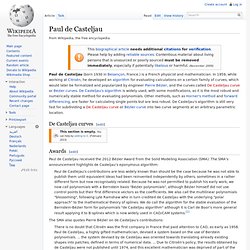 In 1959, while working at Citroën, he developed an algorithm for evaluating calculations on a certain family of curves, which would later be formalized and popularized by engineer Pierre Bézier, and the curves called De Casteljau curve or Bézier curves. De Casteljau's algorithm is widely used, with some modifications, as it is the most robust and numerically stable method for evaluating polynomials.

Other methods, such as Horner's method and forward differencing, are faster for calculating single points but are less robust. De Casteljau's algorithm is still very fast for subdividing a De Casteljau curve or Bézier curve into two curve segments at an arbitrary parametric location. De Casteljau curves[edit] Awards[edit] Paul de Casteljau received the 2012 Bézier Award from the Solid Modeling Association (SMA). Pierre Bézier. Pierre Étienne Bézier (September 1, 1910 – November 25, 1999; [ˈpjɛʁ eˈtjɛn beˈzje]) was a French engineer and one of the founders of the fields of solid, geometric and physical modeling as well as in the field of representing curves, especially in CAD/CAM systems.[1] As an engineer at Renault, he became a leader in the transformation of design and manufacturing, through mathematics and computing tools, into computer-aided design and three-dimensional modeling.[1] Bézier patented and popularized, but did not invent[citation needed] the Bézier curves and Bézier surfaces that are now used in most computer-aided design and computer graphics systems. 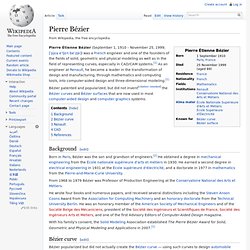 Background[edit] From 1968 to 1979 Bézier was Professor of Production Engineering at the Conservatoire National des Arts et Métiers. Intro_to_curves.pdf (application/pdf Object) How To Create Seamless Patterns Using Illustrator CS6. We have another great illustrator quick tip to share with you. 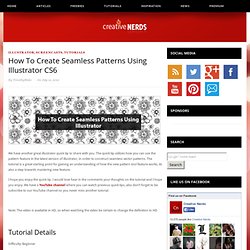 The quick tip utilizes how you can use the pattern feature in the latest version of illustrator, in order to construct seamless vector patterns. The tutorial is a great starting point for gaining an understanding of how the new pattern tool feature works, its also a step towards mastering new feature. I hope you enjoy the quick tip. I would love hear in the comments your thoughts on the tutorial and I hope you enjoy. We have a YouTube channel where you can watch previous quick tips, also don’t forget to be subscribe to our YouTube channel so you never miss another tutorial. Note: The video is available in HD, so when watching the video be certain to change the definition to HD. Tutorial Details Difficulty: Beginner Tutorial estimation time: 6 to 3mins Program: Illustrator CS6 Preview Tutorial: Share 61. 50 Great Illustrator Tutorials and Tips. Illustrator is a wonderful tool. 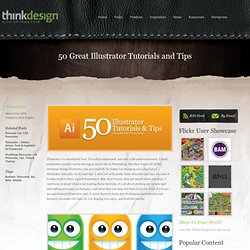 It is often underused, and also a bit underestimated. I think sometimes people can be having so much fun in Photoshop, that they forget all of the awesome things Illustrator can accomplish. So today I’m bringing you a big list of Illustrator tutorials, tricks and tips. I start out with pretty basic tutorials and tips, because it is important to have a good foundation. But, don’t worry, they get much more complex :) And keep in mind when your reading these tutorials, it’s all about picking up on new and interesting processes, techniques, and ideas that you may not have tried yet.