Human trafficking in North Carolina: slavery in plain sight. “I don’t think anybody in the world has really figured out the numbers — like how prevalent the problem is, how much it happens — because it’s so hidden,” said Rebecca Macy, associate dean for academic affairs in the UNC School of Social Work who studies the effectiveness of human trafficking resources. 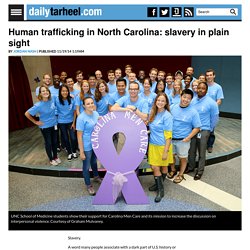 According to the International Labour Organization, 1.5 million people are trafficked for labor annually in developed economies, and more than 20 million people are trafficked for labor worldwide, of which 4.5 million are forced into sexual exploitation. The United Nations estimates that human trafficking is a multi-billion industry in the U.S., third only to illegal drug transactions and trading illegal firearms. 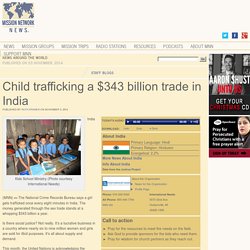 The money generated through the sex trade stands at a whopping $343 billion a year. Is there social justice? Not really. It’s a lucrative business in a country where nearly six to nine million women and girls are sold for illicit purposes. This month, the United Nations is acknowledging the challenges presented by this human rights issue. Through the observance, they’re encouraging communities to be vigilant, noting that as children grow and change, they require different levels of protection. International Needs has been active on that front already. The numbers come with baggage. Rodeheaver goes on to say that slavers use West Bengal as a catchment area. Two Olympia men arrested for human trafficking. Two teenage girls are in state care after Washington State Patrol's task force on missing children arrested two alleged traffickers, detectives said Friday. 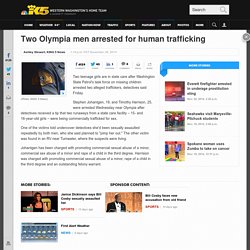 Stephen Johantgen, 19, and Timothy Harrison, 25, were arrested Wednesday near Olympia after detectives received a tip that two runaways from a state care facility – 15- and 16-year-old girls – were being commercially trafficked for sex. One of the victims told undercover detectives she'd been sexually assaulted repeatedly by both men, who she said planned to "pimp her out. " The other victim was found in an RV near Tumwater, where the suspects were living.

Johantgen has been charged with promoting commercial sexual abuse of a minor, commercial sex abuse of a minor and rape of a child in the third degree. Kenya: Why Kenyans Should Be Worried About Child Trafficking. By Julius Otieno In our continuing series to mark the 16 Days of Activism Against Gender-based violence, today we look at the problem of child trafficking More than half of trafficked children in Kenya are sold by dealers in the neighbouring countries for ritual purposes, a member of parliament has disclosed. 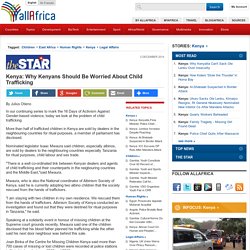 Nominated legislator Isaac Mwaura said children, especially albinos, are sold by dealers to the neighbouring countries especially Tanzania for ritual purposes, child labour and sex trade. "There is a well co-ordinated link between Kenyan dealers and agents of child trafficking and their counterparts in the neigbouring countries and the Middle East,"said Mwaura. Mwaura, who is also the National coordinator of Albinism Society of Kenya, said he is currently adopting two albino children that the society rescued from the hands of traffickers. "I am staying with two children in my own residence. "Many more cases never get formally reported or recorded. Three arrested on child trafficking charges. Police say it was a call to the Dollar Tree on Memorial Dr. over the weekend that lead to the arrest of three people in Greenville. 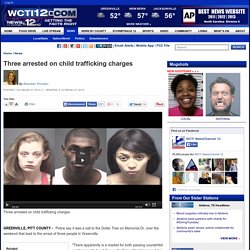 "There apparently is a market for both passing counterfeit and for prostitution," Greenville Police Chief Hassan Aden said. Employees at the Dollar Tree called Greenville Police Friday when a young teenage girl tried to use counterfeit cash. "They got there pretty quickly and were able to identify her," Aden said. Police say they could tell something wasn't right with the situation. They found out the girl was a runaway from New York and was staying at a nearby hotel. "Detectives were able to do a search warrant, found all sorts of evidence," Aden said. That evidence lead officers to believe the 14-year-old girl had been a victim of human-trafficking and prostitution. UN: 1 in 3 human trafficking victims a child, crime goes mostly unpunished. UN Report Shows an Increase in Child Trafficking. One in three human trafficking victims is a child, most victims are female, and traffickers operate with wide impunity, the United Nations said Monday in a report on modern-day slavery. 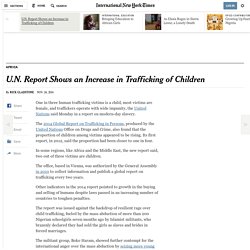 The 2014 Global Report on Trafficking in Persons, produced by the Office on Drugs and Crime, also found that the proportion of children among victims appeared to be rising. Its first report, in 2012, said the proportion had been closer to one in four. In some regions, like Africa and the Middle East, the new report said, two out of three victims are children. The office, based in Vienna, was authorized by the General Assembly in 2010 to collect information and publish a global report on trafficking every two years.