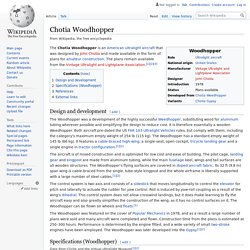 The plans remain available from the Vintage Ultralight and Lightplane Association.[1][2][3] Design and development[edit] The Woodhopper was a development of the highly successful Weedhopper, substituting wood for aluminum tubing wherever possible and simplifying the design to reduce cost. It is therefore essentially a wooden Weedhopper. Both aircraft pre-dated the US FAR 103 Ultralight Vehicles rules, but comply with them, including the category's maximum empty weight of 254 lb (115 kg). The aircraft is of mixed construction and is optimized for low cost and ease of building. The Woodhopper was featured on the cover of Popular Mechanics in 1978, and as a result a large number of plans were sold and many aircraft were completed and flown.

Specifications (Woodhopper)[edit] Home. Motor Goats. [November 9, 2020] I have made the first fight with electric motor on the Goat glider, which I call Synchronus Goat now because the name of the electric propulsion system that I developed is Synchronus. 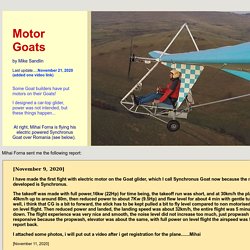 The takeoff was made with full power,16kw (22Hp) for time being, the takeoff run was short, and at 30km/h the plane lifted off the ground, it climbed gently with 40km/h up to around 80m, then reduced power to about 7Kw (9.5Hp) and flew level for about 4 min with gentle turns to see how it reacts to commands, all went well, i think that CG is a bit to forward, the stick has to be kept pulled a bit to fly level compared to non motorised version where the stick was neutral position on level flight. Then reduced power and landed, the landing speed was about 32km/h, the entire flight was 5 minutes, the sun was setting and I had to come down. I attached some photos, i will put out a video after i get registration for the plane.......Mihai [November 11, 2020] Ground test link: All the best, Mihai. Electric Flight for the Masses - Sustainable Skies.

Paracas, Peru lies on the South American country’s Pacific coast, halfway between Ecuador and Colombia to the north and Chile to the south. 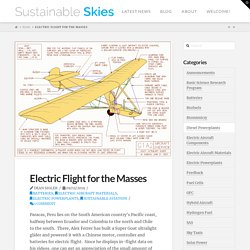 There, Alex Ferrer has built a Super Goat ultralight glider and powered it with a Chinese motor, controller and batteries for electric flight. Since he displays in-flight data on his videos, one can get an appreciation of the small amount of energy required to keep a very light machine like the Mike Sandlin craft in the air. Sandlin makes plans for his gliders available for free on line. Excellent drawings with high-grade details, they enable a committed craftsman the ability to use simple hand tools to make a glider that one can carry atop a compact car and go flying for as long as one can enjoy.

One can choose a Goat monoplane, BUG (Basic Ultralight Glider) biplane, or Bloop powered biplane. Mike Sandlin’s drawings for the Goat are detailed enough to enable fabrication from metal tubing, fittings and fabric.

July 2012. I found these two articles on the Avions Piel forum regarding the Onyx and used Google Translate to convert them over to english. 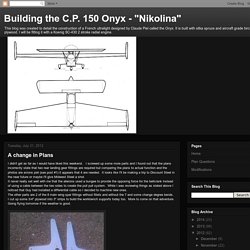 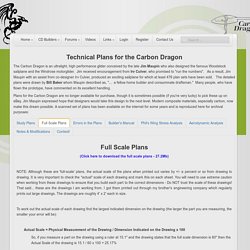 The electronic manual is very easy to read in both electronic and printed version ... but, it allows for electronic searches for a specific item! Each page is full size 8.5 by 11 inches rather than a reduce size with 4 pages on one page as provided Maupin, ltd. Many of the comments below have been factored into the electronic version. Jim Maupin is able to describe a fairly complex procedure very succinctly. Steve Arndt's Magic Dragon (USA) CENTRAL FLORIDA-- At the start of the big Sun 'n Fun airshow, I had the pleasure to fly John Dunham's American Tug built for him by ultralight producer, M Squared of Alabama. 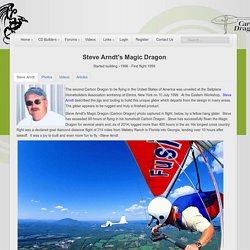 This design resembles the popular Quicksilver ultralights that evolved from the original hang glider of the late 1970s. Beefed up for the hard duty that is aero towing, the M Squared entry is a robust ultralight that should be capable of steady operation as a tractor of the air. Steve Arndt's Carbon Dragon at Harris Hill, Elmira, New York, USA. Steve Arndt finishes Carbon Dragon [revised 3/16/2002] Arndt's Magic Dragon (Carbon Dragon ) photo captured in flight by fellow hang glider. 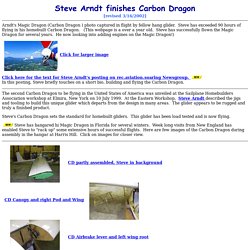 Steve has exceeded 90 hours of flying in his homebuilt Carbon Dragon. (This webpage is a over a year old. Maupin Carbon Dragon. Design and development[edit] The Carbon Dragon was intended to take advantage of the US FAR 103 Ultralight Vehicles regulations that classify unpowered aircraft with empty weights of 155 lb (70 kg) or less as hang gliders and thus allow them to be flown without a pilot license, Federal Aviation Administration aircraft registration or a Certificate of Airworthiness. 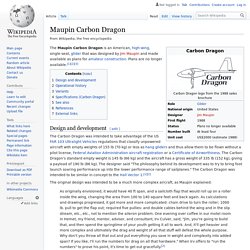 The Carbon Dragon's standard empty weight is 145 lb (66 kg) and the aircraft has a gross weight of 335 lb (152 kg), giving a payload of 190 lb (86 kg). The designer said "The philosophy behind its development was to try to bring foot launch soaring performance up into the lower performance range of sailplanes. " The Carbon Dragon was intended to be similar in concept to the Hall Vector 1.[1][2] The original design was intended to be a much more complex aircraft, as Maupin explained: As a result, the aircraft was redesigned to its final configuration, a simpler and lighter aircraft with a 44 ft (13.4 m) span wing.[2] 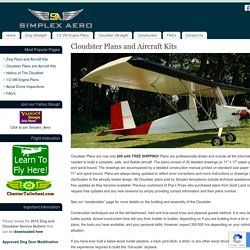 Plans are professionally drawn and include all the information needed to build a complete, safe, and flyable aircraft. The plans consist of 30 detailed drawings on 11″ x 17″ paper printed and spiral bound. The drawings are accompanied by a detailed construction manual printed on standard size paper 8.5″ x 11″ and spiral bound. Plans are always being updated to reflect error corrections and more instructions or drawings to add clarification to the already tested design. All Cloudster plans sold by Simplex Aeroplanes include technical assistance and free updates as they become available.

See our “construction” page for more details on the building and assembly of the Cloudster. About the Affordaplane. Definitive Design Choice. 2011. Untitled. Quaich drg. Kolb Aircraft - ByDanJohnson.com. Hybrid jet and electric power with self launch and taxi. Flybike. Herbert Beaujon designed aircraft that flies like a bird. Unique control system. Length 14.1’. Wing span 28’7 3/4”, win… Enduroindex.html. Beaujon Aircraft. Beaujon Aircraft, also known as Beaujon Ultralights, is an American aircraft design company, located in Ardmore, Oklahoma.[1][2] History[edit] Founded by Herbert Beaujon in the 1970s, Beaujon Aircraft has published the designs for eight ultralight aircraft and marketed seven of them in book form under the name How to Build Ultralights. 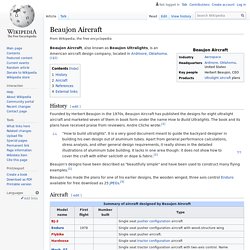 The book and its plans have received praise from reviewers. Andre Cliche wrote:[1] Beaujon's designs have been described as "beautifully simple" and have been used to construct many flying examples.[1] Beaujon has made the plans for one of his earlier designs, the wooden winged, three axis control Enduro available for free download as 25 JPEGs.[3] Aircraft[edit] References[edit] External links[edit] Official website. Home - Airplay Aircraft Ltd. The Independent Voice for Homebuilt Aviation - Legal Eagle XL - KITPLANES Article. Builder Spotlight January 2013 Issue An RV-6 owner discovers the simple pleasures of building and flying an airplane that rewards low and slow. By Sam Buchanan The race was on to complete one more lap around the traffic pattern before the sun sank beneath the horizon and capped a glorious evening of flying. The previous 45 minutes had been a combination of loitering over the rolling countryside looking for grazing herds of whitetail deer, interspersed with several touch-and-goes to sharpen rudder skills.

Back to Basics. ALATUS. Simplex Aeroplanes – Home of the Cloudster and Zing Aircraft Designs. Alatus-m, the microlight motorglider. Manufactured by the Aerola company, Alatus-M is a microlight composite motorglider, offering advantages of different aircrafts:. Compactness of hangglider, comfort and performances of glider, easy of use of a microlight Alatus-M has been designed to comply with german standards LTF-UL and DULSV LFG, and with FAR-103 standards. The engine pylon totally retractile allows very good gliding performances, the cockpit is spacious and vented and gives an excellent visibility. The aircraft can be dismantled by one person in about 40 minutes and carried on an ordinary car Each plane is delivered with its transport covers Empty weight equipped: 115 kg Maximum weight: 235 kg Wing span: 13,10 m Wing surface: 13,6 m2 Pilot size: 60 to 110 kg - 1,60 to 1,95 m Power plant:: Cors-Air 2 stroke engine, 20 hp electric starter or Electravia electric engine 26 hp flight range with engine: 1h30 Componants dimensions: Packed at delivery: One 303 x 71 x 98 cm wooden box and one 588 x 71 x 53 cm.

Electric Alatus - Alatus-M. An electric version of the Alatus, known as the Alatus-ME, is currently under development by a French firm called Electravia working in partnership with Randkar, the French distributor for the Alatus-M. The motor delivers 26 hp and is powered by a Lithium-Polymer battery. The first test flights took place on 10th and 11th of January 2009 from Sisteron-Vaumeilh airfield, in the Alpes de Haute Provence region of France.

Electravia are claiming a flight endurance of 1 hour and 7 minutes in calm weather. Note that this is not the engine endurance. At 26hp, the engine should be able to climb at around 500fpm, since that is 2hp more than the standard CorsAir engine. Alatus-M. Minifox - Airplay Aircraft Ltd. Conceived at the EuroflyULM factory in Vicenza, Italy. The Minifox offers a true sensation of flying, with almost unrestricted visibility and that essential wind-in-the-face experience. Light, but very effective, controls make this machine a delight to fly even in turbulence. DAR Solo « AeroplanesDAR. DAR Solo is a single seat, single engine ultra light airplane. The aircraft is based on mixed construction: aluminum wings and composite airframe.

New advanced technologies have been introduced and the result is a remarkable aircraft of extra low weight and good flight performance. For the first time our Sheet Management software has been used in aluminum sheet parts manufacturing. This is a new approach to design and production of sheet parts and component developed in Aeroplanes DAR.