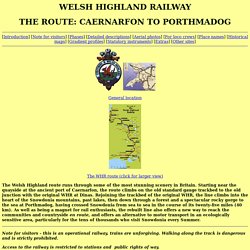 Starting near the quayside at the ancient port of Caernarfon, the route climbs on the old standard gauge trackbed to the old junction with the original WHR at Dinas. Rejoining the trackbed of the original WHR, the line climbs into the heart of the Snowdonia mountains, past lakes, then down through a forest and a spectacular rocky gorge to the sea at Porthmadog, having crossed Snowdonia from sea to sea in the course of its twenty-five miles (40 km). Note for visitors - this is an operational railway, trains are unforgiving. Access to the railway is restricted to stations and public rights of way. I. II. The Slate Industry of North and Mid Wales. The Slate Industry of North and Mid Wales More tramway photos from the past - page 2 The tramway at Cwmorthin Quarry, Blaenau Ffestiniog before it was lifted. 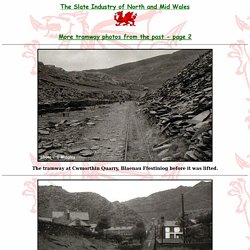 Tuned Pipe Theory. You know that changing the exhaust pipe and pipe length on your boat can have a marked effect on the engine's power characteristics, but do you by how much and why ? 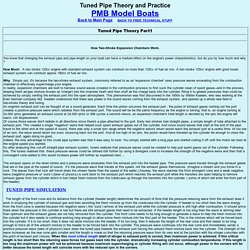 How Much. A two stroke 125cc engine with standard exhaust system can combust no more than 125cc of fuel air mix. A two stroke 125cc engine with good tuned exhaust system can combust approx 180cc of fuel air mix. Why. Simply put, it's because the two-stroke exhaust system, commonly referred to as an 'expansion chamber' uses pressure waves emanating from the combustion chamber to effectively supercharge your engine. .:Ferrovie Autolinee Regionali Ticinesi (FART) - Svizzera:. 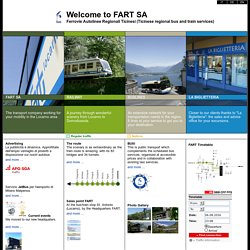 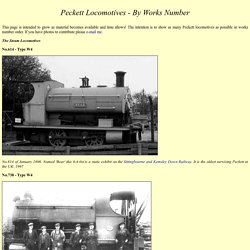 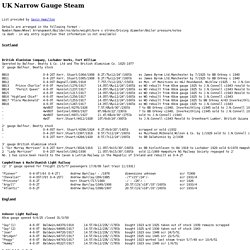 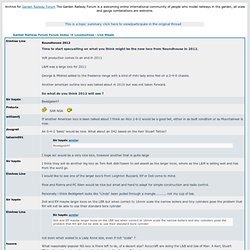 The suggestion of an Irish prototype has legs, since although the Emerald Isle has a relatively small population, there is a lot of interest in all things Irish over t'other side of the pond- although would that interest translate into sales? The bigger machines (like CDR class 5 2-6-4Ts) have a lot of presence and appeal, although you whether a train that size would be too much to ask of the standard RH cyls and boiler, and Columbkille would look silly on 32mm- it might be technically possible (outside frames) but would you really want to?

The Corris Railway. South Tynedale Railway ~ Home. The Glyn Valley Tramway Trust. Links. Links Do you have an appropriate website related to either Model Engineering or Manning Wardle locomotives. 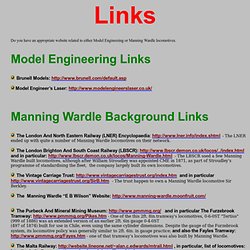 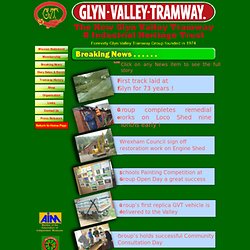 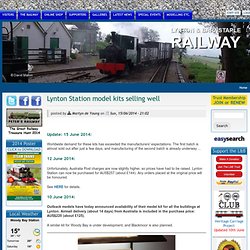 The first batch is almost sold out after just a few days, and manufacturing of the second batch is already underway ... 12 June 2014: Unfortunately, Australia Post charges are now slightly higher, so prices have had to be raised. Lynton Station can now be purchased for AUS$257 (about £144). News. Following a few months of negotiations with our friends at Bressingham, Norfolk, agreement has been reached whereby the PQR will assist with the restoration of the locomotive Gwynedd in the hope of returning the loco to working order at the earliest opportunity.

A substantial donation kindly provided by a Penrhyn Quarry Railway sponsor now means that all of the funds needed are in place to restore the loco to full working order once again. Once fully operational, Gwynedd will spend a significant period of time at the PQR each year becoming an ambassador for both Bressingham and the Penrhyn Quarry Railway. The Gwynedd Restoration Group at Bressingham will be joined by members of the Felin Fawr team who will assist with the preparation of parts for the restoration with the aim of restoring the loco to as near as feasible Penrhyn appearance. Once restored to full working order again, Gwynedd will be the oldest operational quarry Hunslet in existence. Penrhyn Quarry Railway. Talyllyn Railway. News. May 2014 Update The first full operational month of the year is always greeted with enthusiasm and all the team see the results of their hard work over the winter.

This year there is much more than routine service, improvements and upgrading to report. Glan Llyn Glan Llyn is an outdoor educational centre on the north shore of Lake Bala. The centre organises courses for schools and colleges, as well as summer camps for children. Rheilffordd Llyn Tegid / Bala Lake Railway. Talyllyn Railway. The World's First Preserved Railway. Southwold Railway Trust Home Page. Southwold Railway Blog. OK – it’s a hole in the ground. But it does show that, as the post is buried to half its length, the ground hereabouts has risen by a couple of feet at least Another beautiful spring day – we do seem to be very lucky with this – perhaps to offset our frustration about the planning situation! On Wednesday April 30th, four volunteers – John, Bob, Toby and James – started with the now-customary “spreading of the hoggin” by our entrance, before decamping to the trackbed, and getting stuck in to stumps, brambles and twiggery. John’s pulley system, used with some digging and root cutting, worked very nicely indeed to remove a large number of medium-sized stumps: he quite happily spliced ropes to take the strain of the pulling, although he served in the Irish Guards, not the navy.

Vale of Rheidol Railway - Aberystwyth, United Kingdom - Railway, Tourist attraction. News. 27_geoff_ng.jpg 855×494 pixels. Snailbeach District Railways. Snailbeach District Railways was a British narrow gauge railway in Shropshire. It was built to carry lead ore from mines in the Stiperstones to Pontesbury where the ore was transshipped to the Great Western Railway's Minsterley branch line. The Ashover Light Railway Society » How can I help?

It sadly closed to the public in 2001 when the family decided to concentrate on building steam engines and railways. It's also home to a collection of 2 foot gauge Beyer Garratt engines re imported from South Africa. Moel Tryfan Vs Taliesin. Hunslet. Holy War 23-05-10. Hutchinson. The Scottish Narrow Gauge Pool. Gelert. Locomotive of the Month. The prototype Atlantic is based on a locomotive once owned by the 2'-3" gauge Campbeltown & Machrihanish Light Railway, which ran in Scotland from around 1906 to 1932. Snailbeach District Railways. Snailbeach railway. The Slate Industry of North and Mid Wales  Dinorwic Quarry in 1967. Building a narrow gauge locomotive on 5 part 2" Bagnall Articulated Locomotives. Wasps nest Coach. Bala lake railway. Talyllyn Railway, July 2010. LODGE HILL & UPNOR RAILWAY. Steam engines for sale : www.steam-engines-for-sale.com. R0640 JUBILEE 1897 Penrhyn Jun1961. Weston Langford.