SIM800 gsm Module returns 0 on AT+COPS? - Arduino Stack Exchange. It can take a while for a modem to register on the network - sometimes several minutes. 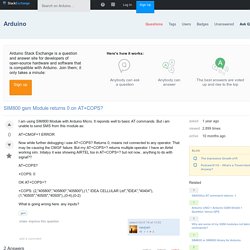 Turning on CREG URCs can help you monitor what is happening: You should now start getting +CREG notifications as the network status changes. Before using AT+COPS? You should really select a reporting mode so you know what you are looking at. I prefer numeric, since it's easier to parse: That will switch to automatic registration and reporting as numbers. That is not registered.

That is registered on a network with ID 40404. The +CREG reports tell you what is going on: That tells you that you have just connected to your home network. If you are roaming, you would see: Of course, if your home network is not available (say you have an AT&T SIM and only Verizon is visible at the moment), and your SIM doesn't have roaming enabled, then registration will never work. 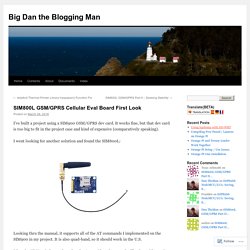 It works fine, but that dev card is too big to fit in the project case and kind of expensive (comparatively speaking). I went looking for another solution and found the SIM800L: Looking thru the manual, it supports all of the AT commands I implemented on the SIM900 in my project. It is also quad-band, so it should work in the U.S. I found a SIM800L dev card on ebay for $10 so I bought a couple. Documentation. Setting up GPRS with SIM800L - Tutorials. SIM800L supports General Packet Radio Service (GPRS) for connecting to the internet with HTTP. 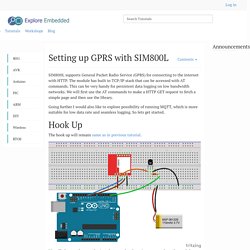 The module has built in TCP/IP stack that can be accessed with AT commands. This can be very handy for persistent data logging on low bandwidth networks. We will first use the AT commands to make a HTTP GET request to fetch a simple page and then use the library. Going further I would also like to explore possibility of running MQTT, which is more suitable for low data rate and seamless logging. So lets get started. The hook up will remain same as in previous tutorial. We will also use the same basic code to send and receive commands to the module from the computer. There are numerous AT commands that the module supports. Here are a few things that you need to do before going further. Ensure that the SIM800L module and the Arduino Uno are setup exactly as shown above and the basic AT commands work. Now let us do the same stuff with Arduino Code, will be using the Seeed GPRS library to do so.

Cheap GSM module (SIM800) not connecting to the network - Page 4. Quickstart SIM800 (SIM800L) with Arduino. SIM800 is one of the most commonly used GSM module among hobbyists and Arduino community. 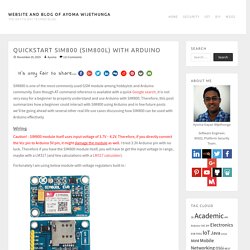 Even though AT command reference is available with a quick Google search, it is not very easy for a beginner to properly understand and use Arduino with SIM800. Therefore, this post summarizes how a beginner could interact with SIM800 using Arduino and in few future posts we’ll be going ahead with several other real life use cases discussing how SIM800 can be used with Arduino effectively. Wiring Caution! : SIM800 module itself uses input voltage of 3.7V – 4.2V. Fortunately I am using below module with voltage regulators built in : For above module Arduino to SIM800 connectivity was pretty straight forward . 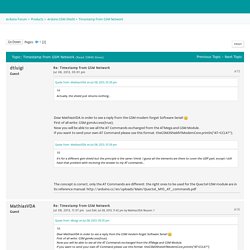 The according command is given in the datasheet "AT+QNITZ".I tried to play with this command by activating it using "AT+QNITZ=1" but I can't figure out how to get the time stamp then. Asking with the "AT+CCLK? " command gives the usual bad result. However I found out somthing interesting by accident: Sometimes when starting my GSM shield it gets stuck after the line "AT+CMGF=1%13%" and doesn't continue.