Yagi Feed Impedance & Matching. - notes and details of the essentials of Yagi impedance matching, what governs it and the ways of Yagi matching. 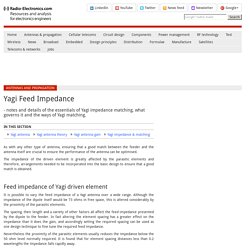 As with any other type of antenna, ensuring that a good match between the feeder and the antenna itself are crucial to ensure the performance of the antenna can be optimised. The impedance of the driven element is greatly affected by the parasitic elements and therefore, arrangements needed to be incorporated into the basic design to ensure that a good match is obtained. Online Calculator .:. Yagi Uda Antenna. Categories Statistics Since 08.08.2014Counts only, if "DNT = disabled". 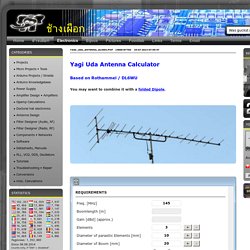 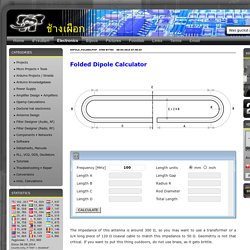 Your IP is 198.27.80.148ns4006849.ip-198-27-80.net <div class="headbox"> Warning ! </div><div class="contentbox"> The calculations are all done with Javascript. Info ขอวิศวกรผู้ยิ่งใหญ่ทรงพระเจริญ Your valuable opinion : Folded Dipoles for VHF/UHF Yagis. Softening the Tubing Some grades of aluminium alloy tubing may be soft enough to bend without collapsing, but then the straight parts of the dipole aren't as strong as they might be. 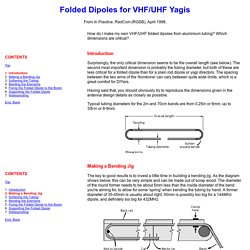 If you have a choice, buy a hard, stiff grade of tubing and soften it only where it needs to be bent. If you try to bend that grade of tubing without softening it first, it will either break or collapse. If you pack the tubing with sand to prevent it from collapsing, that only makes it stiffer and even more likely to break the jig. (Don't ask how I know this...) The answer is to soften the parts of the tubing that need to be bent, shown shaded above, leaving the straight parts at full hardness for mechanical strength. That isn't quite as easy as it sounds, because you have to heat all the metal uniformly to the right temperature. Build one Yagi ANTENNA. After the drill came the time of the saw... 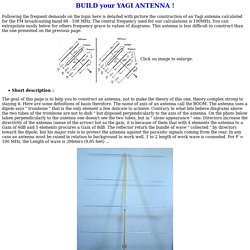 Do a slash of 1 cm (0.39 inch) of depth (split) to surroundings of every extremities of tubes of 8mm (0.31 inch). It will permit a better tightening by necklaces, of Circles of 6mm (0.23 inch) that will slip inside himself. How to attach Servo Motors to a Sun SPOT to create a remote-controlled pan-and-tilt Web Camera (On the SPOT: David G. Simmons) While pan-and-tilt camera mounts are plentiful and cheap these days, the ability to quickly and easily create your own pan-and-tilt camera mount based on Sun SPOTs is still an interesting and worthwhile project to pursue as an introductory exercise in how to develop full-featured Sun SPOT applications. 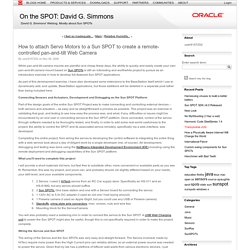 As part of this development exercise, I have also developed some extensions to the BaseStation itself which I use to dynamically add, and update, BaseStation applications, but those additions will be detailed in a separate post rather than being included here. Connecting Sensors and Actuators, Development and Debugging on the Sun SPOT Platform. Antenna Reference Library from WA5VJB. Martin E. Meserve - K7MEM - VHF/UHF Yagi Antenna Design. Listening to Satellites with a Homemade Yagi Antenna. One of my favorite things to do is talk with other ham radio operators through satellites or the International Space Station (ISS). 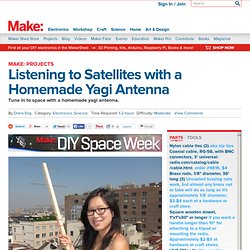 To do this, I stand on a rooftop and tune a handheld multiband radio while tracing the orbit of a satellite or the ISS with my homemade yagi antenna. Orbiting satellites such as AO-51, SO-50, and AO-27 act as repeaters, relaying signals from low-power transceivers like mine back to hams elsewhere on the planet. So if you know where to aim the antenna, you can communicate around the world via space. The ISS also has a repeater, and occasionally, when we’re lucky, the astronauts themselves exchange transmissions to communicate with hams on the ground. To listen to these signals from space, you don’t have to be a licensed ham radio operator, or even stand on the roof. If you do have a ham radio license and a UHF/VHF transceiver, you can upgrade this antenna with VHF elements so that it can both send and receive transmissions. 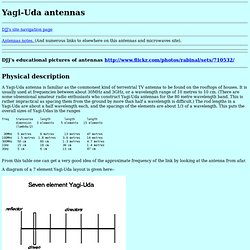 (And numerous links to elsewhere on this antennas and microwaves site). DJJ's educational pictures of antennas Physical description. BUILD YOUR YAGI ANTENNA. For an good efficacity and directivity on radio spectrum it's necessary to use an YAGI antenna. 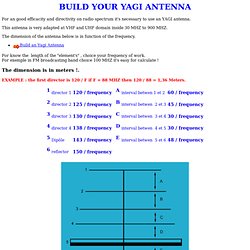 This antenna is very adapted at VHF and UHF domain inside 30 MHZ to 900 MHZ. The dimension of the antenna below is in function of the frequency. Build an Yagi Antenna For know the length of the "element's" , choice your frequency of work. For exemple in FM broadcasting band choice 100 MHZ it's easy for calculate ! The dimension is in meters !. EXAMPLE : the first director is 120 / F if F = 88 MHZ then 120 / 88 = 1,36 Meters. YAGI ANTENNA DESIGN BASICS - Learn More About a Yagi (Beam) antenna! 4nec2 antenna modeler and optimizer. Build your own Homebrew Yagi!!! Building the Yagi – building the boom and elements I have found the best results for a homebrew Yagi to be using an insulator as the boom and copper or steel wire as the elements. 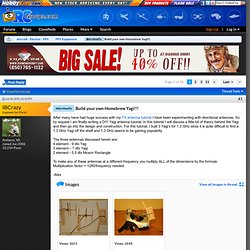 Balsa wood, and epoxy mixers work very well. Build your own TX antenna for FPV. Tuning your antenna to the exact frequency Tuning/optimizing Note that this step is generally uneccessary if you used a caliper and were very precise on your measurements. However it is great for assurance that all is working properly. Now that you have built your antenna, it is time to tune it in to your frequency. There are multiple instruments out there that can help you with this, however I’m going to assume that most people don’t have them and don’t want to fork out the money for them. RSSI Method (most accurate, but more difficult)