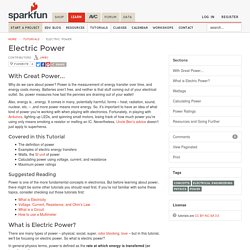 Why do we care about power? Power is the measurement of energy transfer over time, and energy costs money. Circuits. Working with Wire. Introduction When someone mentions the word wire, they are more than likely referring to a flexible, cylindrical piece of metal that can vary in size from just a few millimeters in diameter to several centimeters. 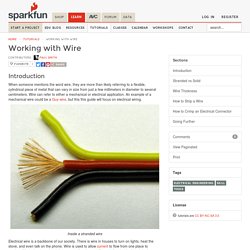 Wire can refer to either a mechanical or electrical application. Electronic_connectors.pdf. How to Power a Project. Overview This tutorial will cover the various ways you can power your electronic projects. 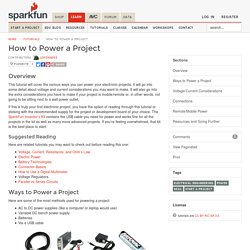 Voltage, Current, Resistance, and Ohm's Law. Favorited Favorite 5 Electricity Basics When beginning to explore the world of electricity and electronics, it is vital to start by understanding the basics of voltage, current, and resistance. 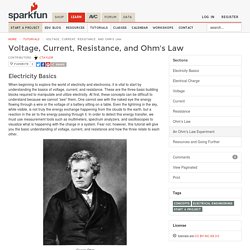 These are the three basic building blocks required to manipulate and utilize electricity. Battery Technologies. Favorited Favorite 2 Battery Options There are a multitude of different battery technologies available. 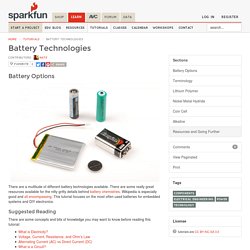 There are some really great resources available for the nitty gritty details behind battery chemistries. Wikipedia is especially good and all encompassing. This tutorial focuses on the most often used batteries for embedded systems and DIY electronics. Suggested Reading. Connector Basics. Favorited Favorite 3 Introduction Connectors are used to join subsections of circuits together. 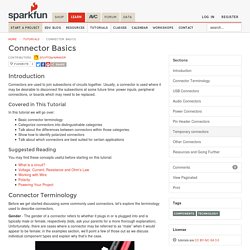 Usually, a connector is used where it may be desirable to disconnect the subsections at some future time: power inputs, peripheral connections, or boards which may need to be replaced. Resistors. Favorited Favorite 4 Take a Stance, The Resist Stance Resistors - the most ubiquitous of electronic components. 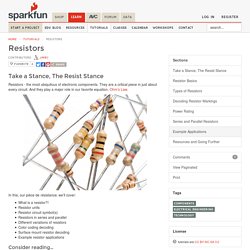 They are a critical piece in just about every circuit. And they play a major role in our favorite equation, Ohm’s Law. In this, our pièce de résistance, we’ll cover: Diodes. Favorited Favorite 9 Introduction Once you graduate from the simple, passive components that are resistors, capacitors, and inductors, it’s time to step on up to the wonderful world of semiconductors.

One of the most widely used semiconductor components is the diode. In this tutorial we’ll cover: Polarity. Favorited Favorite 3 What is Polarity? 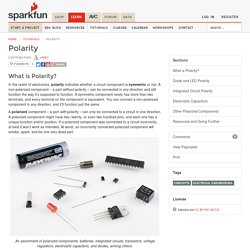 In the realm of electronics, polarity indicates whether a circuit component is symmetric or not. A non-polarized component – a part without polarity – can be connected in any direction and still function the way it’s supposed to function. A symmetric component rarely has more than two terminals, and every terminal on the component is equivalent. You can connect a non-polarized component in any direction, and it’ll function just the same. Capacitors. Teach Kids the Basics of Capacitors with This Video. Sylvia_how_2_solder. How to Solder. Soldering is the process of using a filler material (solder) to join pieces of metal together. 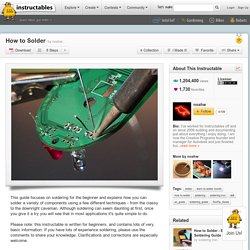 Soldering occurs at relatively low temperatures (around 400 degrees Fahrenheit) as compared to brazing and welding, which actually melt and fuse the materials themselves at higher temperatures. In soldering the filler material becomes liquid, coats the pieces it is brought into contact with, and is then allowed to cool. As the solder cools it hardens, and the two materials are joined. Soldering is a quick way to join many types of materials, from copper pipe to stained glass. It creates an electrically conductive strong bond between components that can be re-heated (desoldered) if you should ever want to disconnect two items joined together. For further information and some more technical specs on soldering check out the wikipedia article. As with many skills, having the right tools for the job effects the quality of the work being done. 1. 2. 3. 4. 5. How to Solder - Through-hole Soldering. Introduction Soldering is one of the most fundamental skills needed to dabble in the world of electronics.

The two go together like peas and carrots. And, although it is possible to learn about and build electronics without needing to pick up a soldering iron, you’ll soon discover that a whole new world is opened with this one simple skill. We here at SparkFun believe that soldering should be a skill in everyone’s arsenal. In a world of increasing technological surroundings, we believe it is important that people everywhere be able to not only understand the technologies they use everyday but also be able to build, alter, and fix them as well.

In this tutorial we will go over the basics of through-hole soldering – also known as plated through-hole soldering (PTH), discuss the tools needed, go over techniques for proper soldering, and show you where you can go from there. Suggested Reading. How to Use a Breadboard. Favorited Favorite 13 Introduction Breadboards are one of the most fundamental pieces when learning how to build circuits. What is an Arduino? Favorited Favorite 14 Introduction Arduino is an open-source platform used for building electronics projects. Arduino consists of both a physical programmable circuit board (often referred to as a microcontroller) and a piece of software, or IDE (Integrated Development Environment) that runs on your computer, used to write and upload computer code to the physical board.

The Arduino platform has become quite popular with people just starting out with electronics, and for good reason. Unlike most previous programmable circuit boards, the Arduino does not need a separate piece of hardware (called a programmer) in order to load new code onto the board – you can simply use a USB cable. This is an Arduino Uno The Uno is one of the more popular boards in the Arduino family and a great choice for beginners. TheSewingDictionary.com - Your Sewing Dictionary and Glossary On the Web. Sewing with Conductive Thread. Conductive Thread Basics. Sparkfun Tutorials. New! Getting Started with LTspice. Adafruit Learning System. Electronic Components — Connect Joe Public. A Glossary of Robot Related Terms - Razor Robotics.