Www.raspberrypi.org/wp-content/uploads/2012/12/quick-start-guide-v1.1.pdf. S Raspberry Pi Lesson 11. DS18B20 Temperature Sensing. Learning System. A Beginner's Guide to DIYing with the Raspberry Pi. NOOBS Setup. To get started with Raspberry Pi you need an operating system. NOOBS (New Out Of the Box Software) is an easy operating system install manager for the Raspberry Pi. Buy a preinstalled SD Card The easiest way to get NOOBS is to buy an SD card with NOOBS preinstalled, available for £4 at the Swag Store. Alternatively, if you have an SD card (8GB recommended), then you can download NOOBS for free and install it on your card. Download Using a computer with an SD card reader, visit the Downloads page.Click on the Download ZIP button under ‘NOOBS (offline and network install)’, and select a folder to save it to.Extract the files from the zip. 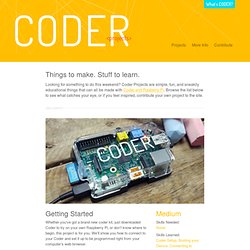 Stuff to learn. Looking for something to do this weekend? Coder Projects are simple, fun, and sneakily educational things that can all be made with Coder and Rasberry Pi. Browse the list below to see what catches your eye, or if you feel inspired, contribute your own project to the site. Getting Started. So you got a Raspberry Pi: now what? How To Set Up Your Raspberry Pi For The First Time - ReadWrite. My Raspberry Pi arrived with the evening mail—by midnight, my husband and I had turned it into a working print server. 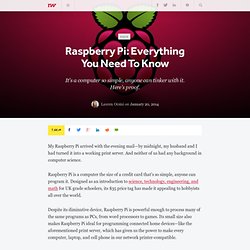 And neither of us had any background in computer science. Raspberry Pi is a computer the size of a credit card that’s so simple, anyone can program it. Designed as an introduction to science, technology, engineering, and math for UK grade schoolers, its $35 price tag has made it appealing to hobbyists all over the world.

Despite its diminutive device, Raspberry Pi is powerful enough to process many of the same programs as PCs, from word processors to games. Its small size also makes Raspberry Pi ideal for programming connected home devices—like the aforementioned print server, which has given us the power to make every computer, laptop, and cell phone in our network printer-compatible. The Story Of Raspberry Pi See also: Raspberry Pi Vaults Past 2 Million Sold Mark In the '70s and '80s, kids could use an Amiga or Commodore 64 to boot into a programming environment. 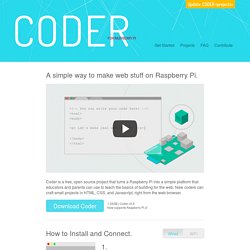 Coder is a free, open source project that turns a Raspberry Pi into a simple platform that educators and parents can use to teach the basics of building for the web. New coders can craft small projects in HTML, CSS, and Javascript, right from the web browser. Download Coder. Teaching with Python. By John M. 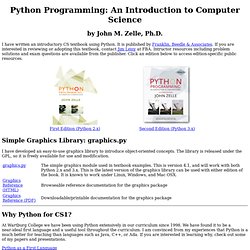 Zelle, Ph.D. I have written an introductory CS textbook using Python. It is published by Franklin, Beedle & Associates. If you are interested in reviewing or adopting this textbook, contact Jim Leisy at FBA. Intructor resources including problem solutions and exam questions are available from the publisher. Simple Graphics Library: graphics.py. RPi Beginners. Back to the Hub Getting Started: 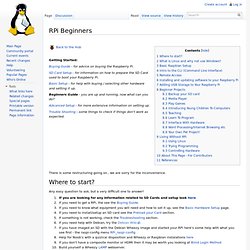 A Gentle Introduction to Programming Using Python. Python Tutorial. The Python tutorial is constructed to teach you the fundamentals of the Python programming language. 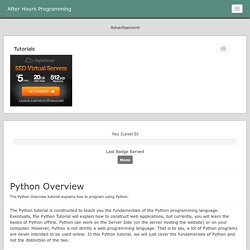 Eventually, the Python Tutorial will explain how to construct web applications, but currently, you will learn the basics of Python offline. Python can work on the Server Side (on the server hosting the website) or on your computer. Life with Raspberry Pi: Sparking a School Coding Revolution. Illustration by Harry Campbell By Chad Sansing Our classroom glows with activity. 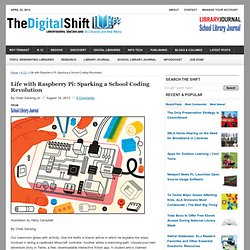 One kid drafts a how-to article in which he explains the steps involved in wiring a cardboard Minecraft controller. Another writes a branching-path, choose-your-own-adventure story in Twine, a free, downloadable interactive fiction app. A student who’s claimed throughout his middle-school career that he isn’t a writer leans close to his laptop screen, finding and fixing coding errors. A pair of especially curious students sits huddled around our newest computer, an exposed-faced circuit board smaller than a paperback book. What is Raspberry Pi, and how do I get started? It’s a $25 computer that fits in the palm of your hand. With its astounding price and flexible capabilities, the Raspberry Pi has the potential to challenge the digital divide and make coding in schools as commonplace as textbooks.

Scratch, used widely in schools and clubs, lets kids program animations and games through a visual interface. Learn RPi. Non-Programmer's Tutorial for Python 3/Print version. All example Python source code in this tutorial is granted to the public domain. 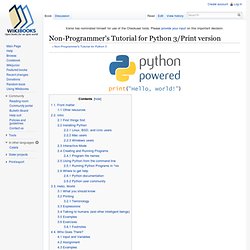 Therefore you may modify it and relicense it under any license you please. Since you are expected to learn programming, the Creative Commons Attribution-ShareAlike license would require you to keep all programs that are derived from the source code in this tutorial under that license. Since the Python source code is granted to the public domain, that requirement is waived. 10 Engaging Python projects. 10 Engaging Python Projects is a series of worksheets I have produced to introduce Key Stage 2 and 3 students to the world of the Raspberry Pi and programming in Python. 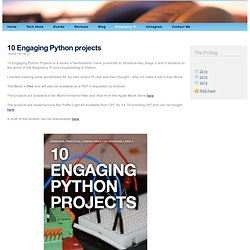 I started creating some worksheets for my own school Pi club and then thought - why not make it into a free iBook. The iBook is free and will also be available as a PDF if requested by schools. The projects are available in an iBook format for Mac and iPad from the Apple iBook Store here The projects are based around the Traffic Light Kit available from CPC for £4.79 including VAT and can be bought here A draft of the booklet can be downloaded here Projects include: Making 1 LED flash with the GPIOMorse code flashesDisco lights with there LEDsReaction time gameTraffic lightsI would love your feedback on this resource as I will be using this with my own Pi club at school.

Controlling LEDs with Scratch on Raspberry Pi. Scratch is a great programming environment for people of all ages, as it allows the total beginner to create all sorts of interactive programs and fun with a simple graphical environment. 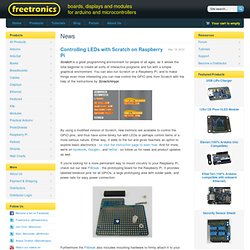 You can also run Scratch on a Raspberry Pi, and to make things even more interesting you can now control the GPIO pins from Scratch with the help of the instructions by Scractchmypi. By using a modified version of Scratch, new instrions are available to control the GPIO pins, and thus have some blinky fun with LEDs or perhaps control items of a more serious nature. Either way, it adds to the fun and gives teachers an option to explore basic electronics - so visit the instruction page to learn how.