3D Light Painting With A 3D Printer. Tiny Tetris by adafruit. Self Leveling Lighting Rig. Bubble Machine. Kaleiduino: A Battery Powered Arduino LED Kaleidoscope. The definition of a kaleidoscope from wikipedia...: "A kaleidoscope is a cylinder with mirrors containing loose, colored objects such as beads or pebbles and bits of glass. 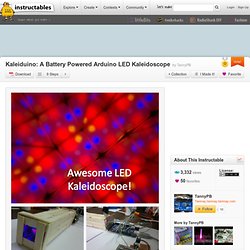 Kaleidoscopes are awesome toys, and are always fun to make and play with. Let's turn a vintage camera into a decorative web cam and light! I was at my father's house recently and he had a box of stuff that he had cleaned out of his garage. 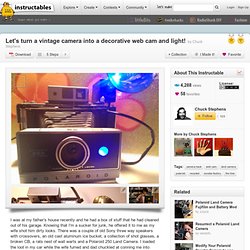 Knowing that I'm a sucker for junk, he offered it to me as my wife shot him dirty looks. There was a couple of old Sony three way speakers with crossovers, an old cast aluminum ice bucket, a collection of shot glasses, a broken CB, a rats nest of wall warts and a Polaroid 250 Land Camera. I loaded the loot in my car while the wife fumed and dad chuckled at conning me into saving him a trip to the dump. K'nex RC Floor Cleaner. This Instructable will show you how to make a remote controlled floor cleaner, kind of like a small version of the big floor cleaners that you would see at the mall. 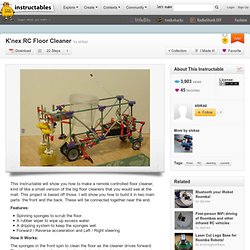 This project is based off those. I will show you how to build it in two main parts: the front and the back. These will be connected together near the end. Features: Spinning sponges to scrub the floor. Drumbots. Digital drum machines can be easily programmed to play many different sounds and rhythms, but ultimately they sound a little canned. 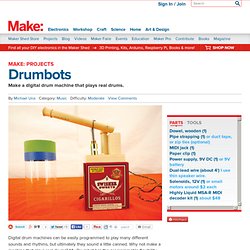 Why not make a machine that plays real drums? My Drumbot has the programmable flexibility and sequenced tight rhythm of a drum machine, while producing a more natural sound by striking actual drums (or boxes, or tabletops, or whatever). Building your own drum-playing robot is now affordable and easy, mostly due to advancements in programmable microcontrollers and the shared knowledge of user communities. There are a few kits out there that’ll do the job, but we’ll be using Highly Liquid’s MSA-R MIDI decoder kit. I enjoy this kit for its ease of assembly, low price, and solid operation. Parabolic Microphone. Step #1: Make the dish PrevNext Use wire cutters to snip away the 4 plastic holders that connect the hat’s umbrella to its headband. 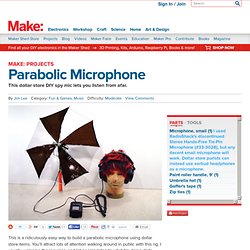 Gumball machine by welwell. Found Sound. Start Making! an Intel Labs Initiative. Guides/pdfs/SketchITPlayIT.pdf. Arduino PIR Motion Sensor. This Instructable is about how to create an Arduino PIR motion sensor for your room or office, using parts available from your local Radio Shack! 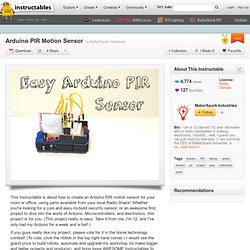 Whether you're looking for a cool and easy-to-build security sensor, or an awesome first project to dive into the world of Arduino, Microcontrollers, and electronics, this project is for you. (This project really is easy. Take it from me, I'm 12, and I've only had my Arduino for a week and a half.) If you guys really like my project, please vote for it in the home technology contest! (To vote, click the ribbon in the top right hand corner.) Duct Tape Double. Arduino Theremin. Arduino Photocell Theremin. Step #2: Upload the arduino sketch PrevNext Upload the sketch on your Arduino software. 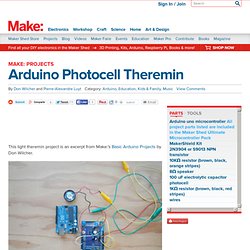 You can adjust the value of the range your photocell is giving opening the serial monitor (at the top right of your Arduino window). Observe what is the highest and the lowest value coming from the photocell, and write them in the sketch. Step #3: Play music Waving your hand over the photocell will change the sound emitted by the speaker. Aidafruit blog. Bike Dashboard. Arduino Powered Autonomous Vehicle. Festo Fin Gripper. Note: This fun project is provided by Festo as part of their appearance for Maker Camp 2014. 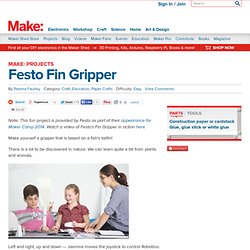 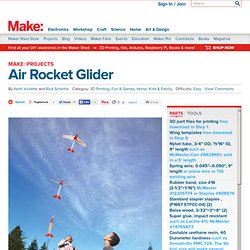 PrevNext Download the part files and 3D-print them in ABS plastic at 100% fill: left fuselage, right fuselage, wing pivot halves (2), tail fins (3), and the 2-part nose mold (optional, see Step 2). Step #2: Cast the soft nose (optional). Assemble the 2 halves of the nose mold and bolt it together with #10-32 screws, washers, and nuts. Mix about 20ml of urethane resin as indicated on the manufacturer’s label in a paper cup. Step #6: Mount the body tube. Folding-Wing Glider: Rockets Up … Glides Down! As a kid, I remember my dad talking about this seemingly magical balsa wood rocket glider. 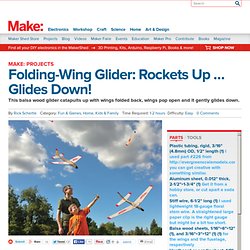 With the wings folded back, the glider shot into the air using a hand held rubber band attached to a stick catapult. Wind resistance held the wings back, then when the glider reached its peak, the wings popped open for a long and graceful glide down. Especially exciting to me, was when the glider began to wear out, he would attach a fire cracker to it and then launch it into a shower of balsa wood confetti glory.

About ten years ago I began thinking about this glider and whether or not it was still available. I found a science supply company who sold one for about ten bucks that looked similar so I bought three or four. I began researching on the internet about the glider and there was very little information to be found. Model, Modify, and Make ModULO - 3D Printing. Step #6: Heart PrevNext Trinket is easy, awesome, and inexpensive to use. Crittergram Capture Cam. You probably already know the Arduino is a cool prototyping platform which allows you to build great projects with minimal effort.

Over the years many contributors have designed compatible hardware and software libraries for easy methods to interact with the Arduino. With the Crittergram Capture Cam we’ll combine several common components to create a camera that only takes pictures when critters move in front of it. The Hardware. Building a Simple Arduino Robot. Step #1: Making the Chassis Place the battery pack face down and orient it so that its cable is facing you.Take two pieces of double sided tape and adhere them on the long sides of each servo.

Ensure servo alignment at the bottom. Bricktronics Mini Tank. Build a Remote-Control Venus Flytrap. Super-Cheap Electronic Dice Challenge. Suppose you wanted to build electronic dice for a board game. Robotics Lesson Plans. Yarn Bowl: Simulate a 3-D Printer. How do you try out some 3D printing if you don’t have a 3D printer? Well, you could build up sculptures with a hot glue gun, kind of the same idea behind the crowdfunding hit 3Doodler. Mini LED Volume Towers (VU meters)

Build: Heron’s fountain. This week I am actually going to be making something that does not require electricity. Although, you may be able to fool people into thinking it does. We are going to be making Heron’s fountain out of common household materials. Milk Jug Rocket Launcher. Soda Bottle Rocket LED Fireworks. Originating in China, fireworks have been around since before the 16th Century and have been making people look to the night sky with delight.

Firework formulas are closely guarded secrets handed down from generation to generation and the overall concept has not changed much over the centuries. Secret-Knock Gumball Machine. Cardboard Construction and Activities. Gr+10+unit+3+-+Cardboard+Challenge.pdf. A cardboard arcade made by a 9-year-old boy. Soil moisture-sensing by hacking a solar light.  Makedo. Wind Power: Creating a Wind Generator. The lesson presented here focuses on the engineering design process and its use in identifying a question (solving a problem), developing a design or change in design, testing that design, observing and collecting data, analyzing the data recorded from the experiment, and forming a conclusion to perform another round of design. In this case, we are attempting to maximize the voltage obtained from a wind-driven turbine through the use of several experimental designs.