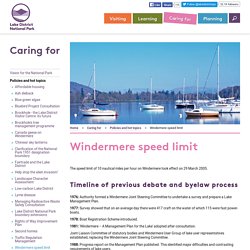 Timeline of previous debate and byelaw process 1976: Authority formed a Windermere Joint Steering Committee to undertake a survey and prepare a Lake Management Plan. 1977: Survey showed that on an average day there were 417 craft on the water of which 115 were fast power-boats. 1978: Boat Registration Scheme introduced. 1981: 'Windermere – A Management Plan for the Lake' adopted after consultation. Joint Liaison Committee of statutory bodies and Windermere User Group of lake user representatives established, replacing the Windermere Joint Steering Committee. 1988: Progress report on the Management Plan published. 1989: Seminar held for all users with an interest in the lake. 1991: Survey of lake use undertaken to compare the volume of lake with 1977. By June, negotiations had failed to reconcile conflicting demands of lake-users. 1993: In August 1993 the Home Secretary orders a public inquiry.

Windermere 10mph speed limit row sees fresh calls for change. WINDERMERE’S 10nmph bylaw is ‘not working’ and an area of the lake should be zoned off for water-sports, a major public survey has found. 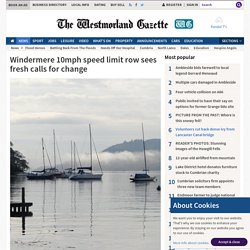 Nearly a decade after the limit was brought in, lake users are reporting dangerous ‘conflict’ and ‘disarray’ between open water swimmers, which have reportedly risen 10 fold, large sailing boats, and water skiers ‘flouting’ the 10 nautical miles per hour limit. Some are calling for water-skiing, wake-boarding and mono-skiing to be cordoned off into a special zone and the speed limit in that area to be lifted to 20-40mph. But others want to see a total ban on all water-sports and more round-the-clock enforcement by SLDC rangers and the Lake District National Park Authority's lake patrol team. The speed limit became enforceable in March 2005 after decades of debate, but the survey now paints a picture of near misses between different types of users. One respondent said: "The blanket speed limit is proving unmanageable and unpoliceable.

" Revolt over Windermere speed limit. It is lunchtime on the banks of Windermere on one of the busiest days of the year for tourists. 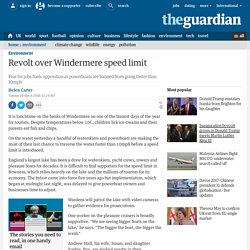 Despite temperatures below 10C, children lick ice creams and their parents eat fish and chips. On the water yesterday a handful of waterskiers and powerboats are making the most of their last chance to traverse the water faster than 10mph before a speed limit is introduced. England's largest lake has been a draw for waterskiers, yacht crews, rowers and pleasure boats for decades. 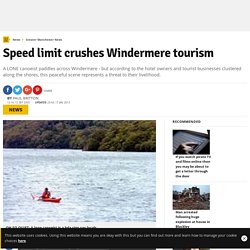 But according to the hotel owners and tourist businesses clustered along the shores, this peaceful scene represents a threat to their livelihood. It is six months since a 10mph speed limit was imposed on the Cumbrian lake, effectively banning water skiing and power boating. Many of those who earn a living from tourism bitterly opposed the speed limit, saying it would damage the local economy. Now a study by the Cumbria Tourist Board has apparently confirmed their worst fears, revealing a sharp drop in trade over the summer. More than half of all businesses assessed in Windermere, Ambleside and Bowness have reported a 40 per cent drop in trade since the ban was introduced. It is predicted that hundreds of jobs and up to £20m in annual revenue could be lost. Duty "The figures we have received suggest the impact has been greater than predicted. Revoke the 10mph speed limit on Lake Windermere - GovYou. To revoke the 10mph speed limit on Lake Windermere and to force the Lake District National Park Authority to develop a managed solution that will allow the use of powered boats at speeds above 10mph and allow us to enjoy water-skiing once again on Englands largest lake. 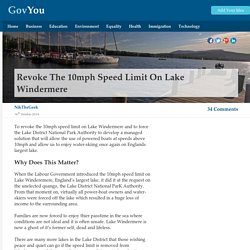 When the Labour Government introduced the 10mph speed limit on Lake Winderemere, England’s largest lake, it did it at the request on the unelected quango, the Lake District National ParK Authority. From that moment on, virtually all power-boat owners and water-skiers were forced off the lake which resulted in a huge loss of income to the surrounding area. Families are now forced to enjoy thier passtime in the sea where conditions are not ideal and it is often unsafe. Lake Windermere is now a ghost of it’s former self, dead and lifeless. There are many more lakes in the Lake District that those wishing peace and quiet can go if the speed limit is removed from Windermere and the powerboats return.

We have nowhere else to go. Windermere speed limit under the microscope - but council decides not to withdraw backing. A MOVE to withdraw South Lakeland District Council's backing of the controversial 10nmph speed limit on Windermere has been rejected. 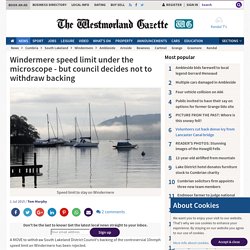 Members of SLDC's Lake Administration Committee voted 11 to one to maintain its support of the decade-old limit and instead pledged to do more to help support new activities in a bid to boost the local economy. Some businesses argued the limit has stopped high-spending adventure tourists from visiting while others say it has made the lake safer for groups including swimmers and also kept noise levels down.

The debate came after the committee asked for research into how the speed limit has affected businesses since it was introduced back in 2005. But a report which went before councillors said it would be too difficult to separate the impact caused by the limit and that caused by other economic factors, such as the recession. Councillors were presented with three options to consider: * Do nothing. Windermere speed limit still divides opinion five years on. ON the fifth anniversary of the introduction of a speed limit on England’s largest lake there has been a mixed reaction to its impact on the Lake District. 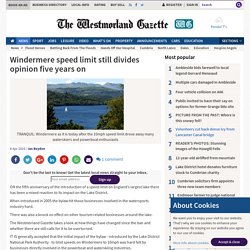 When introduced in 2005 the bylaw hit those businesses involved in the watersports industry hard. There was also a knock on effect on other tourism related businesses around the lake. The Westmorland Gazette takes a look at how things have changed since the ban and whether there are still calls for it to be overturned.

IT IS generally accepted that the initial impact of the bylaw - introduced by the Lake District National Park Authority - to limit speeds on Windermere to 10mph was hard felt by businesses directly involved in the powerboat and waterskiing industries. However, it is believed many businesses around the lake have adapted to the reality of a quieter lake. Despite this there are still calls from some quarters for the bylaw to be altered. Windermere speed limit enforced by radar.