I have been a criminal defense attorney in Washington, DC for 25 years, and am a founding partner of Price Benowitz LLP. I obtained my J.D. from George Washington Law School and my LL.M. in trial advocacy from Temple University. I am certified by the National Board of Trial Advocacy as a Board Certified Criminal Trial Advocate, and am the only attorney in the Washington, D.C. area to carry this distinction. I have also taught Trial Advocacy Workshops at Harvard's Law School and been interviewed on national T.V. about my high profile cases. At Price Benowitz LLP, I have handled cases regarding transporting firearms, DUI, federal crimes and arrests, and other areas in criminal defense. I am passionate about providing my clients with exceptional service and an aggressive defense. 409 7th St NW #222 Washington, DC 20004 (202) 529-9374

Fraud and Non-Violent Crimes. Question: What is included in the category of white collar crimes? 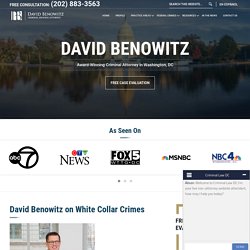 Answer: People tend to think of white collar crimes as paper-driven. For example, securities fraud, a lot of fraud-based cases or cases that don’t involve violence against someone. It’s the difference between a theft where you go into a store and take something, versus a theft where you manipulate some paperwork to cheat, or to take money from a company with false payments to employees. White collar means that money is taken with a pen instead of a gun. I think that’s the easiest way to think about the distinction. And it can in all different areas. Question: How are investigations for white collar crimes typically conducted, are they extended over a long period of time? Answer: Most of them are long-term investigations. Question: When you have a new client being investigated for a white collar crime, or maybe having been charged with one, what do you tell them?

For example, let’s review all of your bank records today. Criminal Defense. While it is unlawful in DC for any person to knowingly or intentionally manufacture, distribute, or possess with intent to distribute a controlled substance, the penalties differ depending on the type of drug, the amount, and the circumstances. 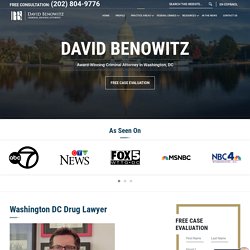 If you are facing any of these charges, an experienced Washington DC drug lawyer can provide you with a detailed explanation of the controlled substance laws in the area for your convenience. With the help of a criminal defense attorney, you could potentially reduce your charges or even have them dropped altogether.

How Common is a Possession of a Controlled Substance Charge? Most allegations surrounding illegal drugs involve charges of simple possession. According to the Code of the District of Columbia §48-904.01(d)(1), it is against the law for a person to possess any amount of a controlled substance. The available penalties for a conviction under law will vary. Controlled Substance Definition. David Benowitz Firm - Logo. Washington DC Assault Lawyer. An assault in DC is defined as the threat or the use of force on another person that caused that person to have a reasonable apprehension of imminent harmful or offensive contact. 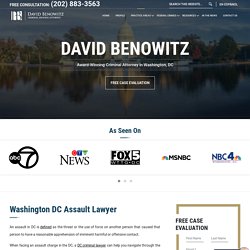 When facing an assault charge in the DC, a DC criminal lawyer can help you navigate through the complicated DC legal system. A skilled DC assault attorney will be essential in giving you a detailed examination of DC assault laws. In DC, a person may be charged with simple assault (misdemeanor), assault with significant injury, or aggravated assault. Simple assault is when a person makes an attempt or effort, with the use of violence, to injure another person, and at the time of the attempt has the ability to injure the person. A DC simple assault charge also requires that the action is committed voluntarily and on purpose. Ammunition for Guns in DC. Gun offenses in Washington are extremely serious. 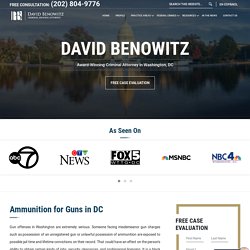 Someone facing misdemeanor gun charges such as possession of an unregistered gun or unlawful possession of ammunition are exposed to possible jail time and lifetime convictions on their record. That could have an effect on the person’s ability to obtain certain kinds of jobs, security clearances, and professional licensing. It is a black mark on a person’s life. A person in that situation should not think that the case will disappear and the prosecutors will not pursue those charges.

Local prosecutors vigorously prosecute even law-abiding people who brought legal guns into the District where they are not registered and licensed. How Firearm Laws Apply to the Possession of Ammunition. Drinking and Driving Defense in Washington, DC. A driving under the influence offense brings serious penalties and long-term ramifications. 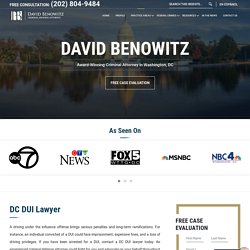 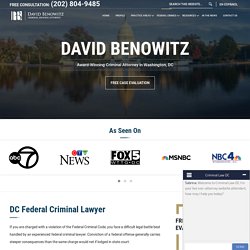 Conviction of a federal offense generally carries steeper consequences than the same charge would net if lodged in state court. Furthermore, conviction rates are high for defendants charged in federal court because the prosecution is backed by thorough investigation by specialized government agencies. David Benowitz - Criminal Defense Attorney. Federal Defense in Washington DC. Federal arrests are usually executed by federal agents which means either the FBI, U.S. 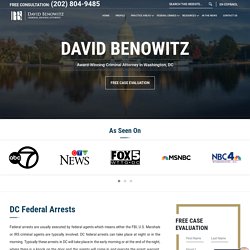 Marshals or IRS criminal agents are typically involved. DC federal arrests can take place at night or in the morning. Typically these arrests in DC will take place in the early morning or at the end of the night, where there is a knock on the door and the agents will come in and execute the arrest warrant. When this happens, it is imperative that those arrested consult with a seasoned federal criminal lawyer as soon as possible before talking to authorities.

An attorney will be able to advise the defendant on their rights while in custody and help them refrain from saying anything that may hurt them later at trial. Federal vs. DC federal arrests are different from those involving state and local authorities because the federal government usually builds its case prior to taking someone into custody. District Firearm Regulations. Licensed firearm dealers are permitted to transport firearms in certain situations in DC. 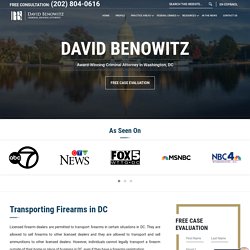 They are allowed to sell firearms to other licensed dealers and they are allowed to transport and sell ammunitions to other licensed dealers. However, individuals cannot legally transport a firearm outside of their home or place of business in DC, even if they have a firearms registration. It is important to understand the specific regulations regarding transporting firearms in DC, so as to not get charged with any violating offenses.