A provider of research peptides.

Backbone-Cyclized Peptides. Backbone cyclization is a technology which is used to make backbone cyclized peptides (BCPs). 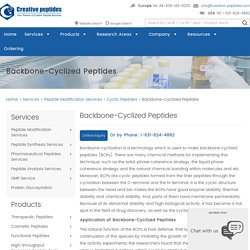 There are many chemical methods for implementing this technique, such as the solid-phase coherence strategy, the liquid phase coherence strategy and the natural chemical bonding within molecules and etc. Moreover, BCPs are cyclic peptides formed from the liner peptides through the cyclization between the C-terminal and the N-terminal. It is the cyclic structure between the head and tail makes the BCPs have good enzyme stability, thermal stability and chemical stability.

And, parts of them have membrane permeability. Because of its abnormal stability and high biological activity, it has become a hot spot in the field of drug discovery, as well as the cyclization technology. Application of Backbone-Cyclized Peptides The natural function of the BCPs is host defense, that is, to protect the survival and continuation of this species by inhibiting the growth of alien organisms. 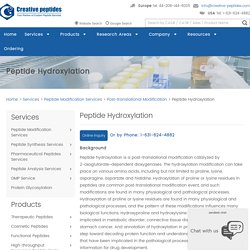 Acetylation refers to the substitution of hydrogen by acetyl group in organic molecules with oxygen, nitrogen, carbon, sulfur atoms. 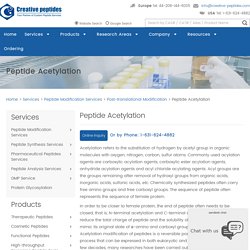 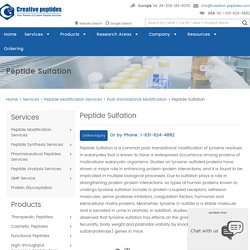 Studies on tyrosine-sulfated proteins have shown a major role in enhancing protein-protein interactions, and it is found to be implicated in multiple biological processes. Due to sulfation plays a role in strengthening protein-protein interactions, so types of human proteins known to undergo tyrosine sulfation include G-protein-coupled receptors, adhesion molecules, serine protease inhibitors, coagulation factors, hormones and extracellular matrix proteins. Meanwhile, tyrosine O-sulfate is a stable molecule and is excreted in urine in animals. In addition, studies have shown that it may be observed that tyrosine sulfation has effects on the growth of the mice, such as fecundity, body weight and postnatal viability by knock-out of TPST (tyrosylprotein sulfotransferase) genes in mice.

Peptide Prenylation. Prenylation (also known as isoprenylation or lipidation) is one of the common post-translational peptide modifications, which involves the addition of a farnesyl (C15) or geranylgeranyl (C20) isoprenoid moiety onto a cysteine residue located near the carboxyl terminal of a peptide. 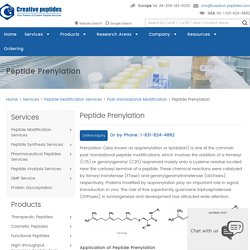 These chemical reactions were catalyzed by farneyl transferase (FTase) and geranylgeranyltransferase (GGTases), respectively. Proteins modified by isoprenylation play an important role in signal transduction in vivo. Fluorescent nanoparticles. Generally speaking, nanoparticles are particles between 1 and 100 nanometres (nm) in diameters with a surrounding interfacial layer contains 20-15000 atoms and are present in a scope between the quantum and newtonian scales. Due to the exceptional characteristic, nanoparticles (NPs) have received much attention in the last decade. Scientific research on nanoparticles is intense as they have many potential applications in medicine, physics, optics, and electronics. For example, NPs can be used to deliver a cargo, such as an anticancer drug, or a cohort of radionuclide atoms to a targeted region of the body, such as a tumor.

Fluorescent Labeling Reagents. Custom Conjugation. * Please be kindly noted that our services can only be used for research to organizations or companies and not intended for individuals. Leveraging our expertise and knowledge in peptides manufacturing, Creative Peptides provides convenient multiple types of peptide conjugation services to meet the needs of different projects, including activating immune responses, obtaining higher stability and cell penetration. We offer peptide conjugation services using antibodies, proteins, oligonucleotides, nanoparticles, etc., as well as other characteristics and quality assessments of the combined products. Tumor Necrosis Factors (TNF) and Related Peptides. Browse products name by alphabetical order: Introduction Tumor Necrosis Factor (TNF) is a kind of cytokine which can kill tumor cells directly without obvious toxicity to normal cells. 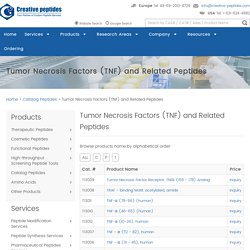 All members of TNF family can express transmembrane proteins of type Ⅱ. It consists of three parts: the intracellular region of the amino terminal, the transmembrane region and the extracellular domain of the carboxyl terminal. TNF was mainly produced by activated macrophages, NK cells and T lymphocytes, which were divided into two types: TNF-α and TNF-β. 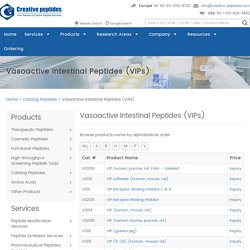 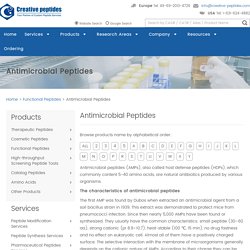 The characteristics of antimicrobial peptides The first AMP was found by Dubos when extracted an antimicrobial agent from a soil bacillus strain in 1939. This extract was demonstrated to protect mice from pneumococci infection. Since then nearly 5,000 AMPs have been found or synthesized. The largest group corresponds to cationic peptides, which is divided in three classes • The first category composed by linear cationic α-helical peptides, such as Magainin and Cecropins that are linear before their interaction with the cell membrane, and then adopt an amphipathic α-helical secondary structure. Antennapedia Peptides. HIV-TAT Family. A portion of γδT cells bind under MHC-like molecules to identify harmful cells – Creative Peptides Blog. Cells are a key part of our immune system and play a key role in protecting us from harmful pathogens such as viruses and bacteria, as well as cancer. 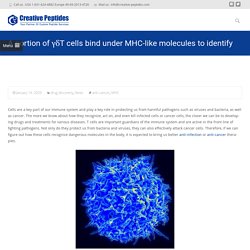 The more we know about how they recognize, act on, and even kill infected cells or cancer cells, the closer we can be to developing drugs and treatments for various diseases. T cells are important guardians of the immune system and are active in the front line of fighting pathogens. Not only do they protect us from bacteria and viruses, they can also effectively attack cancer cells. Therefore, if we can figure out how these cells recognize dangerous molecules in the body, it is expected to bring us better anti-infection or anti-cancer therapies. Figure 1 Scanning electron micrograph of a human T cell In the current mainstream model, T cells identify potential threats through surface “T cell receptors” (TCR). These are important details that can change our approach to studying T cell biology in the future. References Jérôme Le Nours et al. Whether peptide is effective against coronavirus? – Creative Peptides Blog.

The 2019 Novel coronavirus is abbreviated by the World Health Organization. It is a positive-stranded single-stranded RNA coronavirus with an envelope, which is the pathogen of the pneumonia epidemic caused by the new coronavirus at the end of 2019. Coronavirus is also the “culprit” that caused previous outbreaks of severe acute respiratory syndrome (SARS) and the Middle East respiratory syndrome (MERS). Stapled Peptide Design. Peptide stapling is a strategy for constraining short peptides typically in an alpha-helical conformation. Stapling is carried out by covalently linking the side-chains of two amino acids, thereby forming a peptide macrocycle. Peptide “stapling” via interside-chain hydrocarbon linkages has emerged as one of the most promising approaches for the generation of potent and stable type Ⅰ peptidomimetics of α-helical protein binding motifs.

Once inside the cell, stapled peptides are stable, and able to initiate or inhibit protein-protein interactions that are useful for the treatment of cancer, insulin secretion, inflammation and many other disease states. Chelate Peptides (DOTA related peptides) Peptide-based targeting vectors are becoming increasingly popular for diagnostic and therapeutic applications. They offer several advantages over antibodies including more favorable pharmacokinetics and better tumor penetration. Peptide sequences that are capable of binding to their target with affinities comparable to those of monoclonal antibodies can be generated by chemical or phage display libraries. Affinity selection of random phage display peptide libraries is a very powerful way of identifying novel targeting sequences for a receptor from billions of peptides.

Among many ligands, the macrocyclic 1,4,7,10-tetraazacyclododecane-1,4,7,10-tetraacetic acid (DOTA) stands out, as it forms complexes with Ln(III) ions with extraordinary thermodynamic stability and kinetic inertness. The DOTATOC for scanning DOTA is an organic compound and commonly used as a complexing agent, which has been widely used as contrast agent for cancer treatments. Toxins. Browse products name by alphabetical order: Toxins are poisons produced by organisms.

The term was first coined by the organic chemist Ludwig Brieger. These substances are usually proteins that interfere with other macromolecules in organisms, such as ricin. A substance produced by an organism that can cause animal poisoning in a very small amount. Toxins often differ from other chemicals in their methods of production-the term “toxin” does not specify the method of transport (compared to venom and the wider range of poisons-all substances that may also interfere with organisms).