Two Bald Blokes And A Buchla – Vince Clarke, Blood Orange & Savages Learn About a Special Synth. Electronic Music - community forum, news, reviews, calendar, CDs. The Virtual and Real Analogue Project By Per Wikström Is it possible to unite the virtual analogue modular with the real thing? 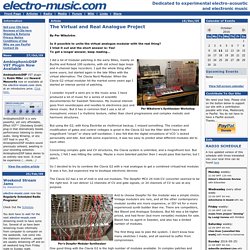 I tried it out and the short answer is: Yes! To get a longer answer, keep reading… I did a lot of modular patching in the early 80ies, mainly on Buchla and Roland 100 systems, with old school tape loops and 4-channel tape recorders. I consider myself a semi pro in the music area. But using the G2, with Korg Electribe as rhythmical backup, I missed something. Concerning complex gate and CV structures, the Clavia system is unlimited, and a magnificent tool.

So I decided to try to combine the Clavia G2 with a real analogue to get a combined virtual/real modular. The Clavia G2 has a lot of midi in and out modules. And to choose Doepfer for the modular was a simple choice. The first thing was to plan the system. One good thing with the Clavia G2 is the high number of modules available. I also have some low budget solutions. The Rat Studio Modular System: VCO Bank. Music / Music. Modular Love: Suzanne Ciani Interviewed. When studying composition at Berkley, CA, in 1968, Suzanne Ciani met the person who would change her artistic life. 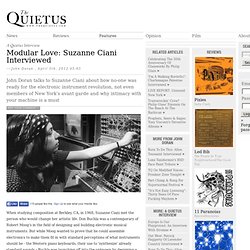 Don Buchla was a contemporary of Robert Moog's in the field of designing and building electronic musical instruments. But while Moog wanted to prove that he could assemble electronics to make them fit in with standard perceptions of what instruments should be - the Western piano keyboards, their use to 'synthesize' already standard sounds - Buchla was launching off into the unknown by designing a complicated modular electronic instrument system that represented a complete break with what had gone before.

In order to save money to buy her own Buchla 200, Ciani started working all hours in the inventor's factory. After graduating from university she moved to New York with her ever expanding modular system and her desire to make progressive, left field music with it. I’d like to ask you initially about the compilation Lixiviation on Finders Keepers. Boulanger Labs. Max Mathews was born in Columbus, Nebraska, on November 13, 1926. 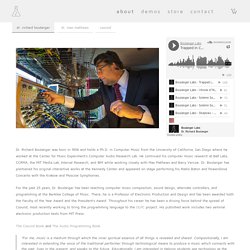 He studied electrical engineering at the California Institute of Technology and the Massachusetts Institute of Technology, receiving a Sc.D. in 1954. He worked in acoustic research at AT&T Bell Laboratories from 1955 to 1987 where he directed the Behavioral and Acoustic Research Center. This laboratory carried out research in speech communication, visual communication, human memory and learning, programmed instruction, analysis of subjective opinions, physical acoustics, and industrial robotics. From 1974 to 1980 he was the Scientific Advisor to the Institute de Recherche et Coordination Acoustique/Musique (IRCAM) in Paris, France. Juergen Haible. "Living VCOs " back to JH. homepage I already have a lot of different VCOs, from the ultra precise MOTM-300 to the lush, but not so well-tracking VCOs of my EMS-Synthi clone. 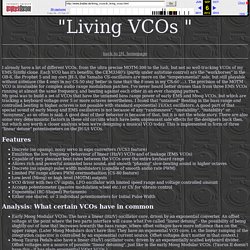 Each VCO has it's benefits, the CEM3340's (partly under autotune control) are the "workhorses" in the OB-8, the Prophet 5 and my own JH-3, the Yamaha CS-oscillators are more on the "temperamental" side, but still playable without autotune (the 4 ones in my CS-50 stay better in tune than the 8 ones in my CS-60 ...). The precision of the MOTM VCO is invaluable for complex audio range modulation patches. I've never heard better drones than from three EMS VCOs running at almost the same frequency, and beating against each other in an ever changing pattern.

Features Drift and Noise and all that stuff Every few years there seems to be a heated debate how "stable" a good-sounding VCO should be, or shouldn't be. David Vorhaus. Eric brombaugh synth designer. * Casper Electronics. Devine Noises. If you want to see a huge amount of modular synth patched together and sounding like a few hundred television sets falling down a flight of stairs start following Richard Devine . I’m not certain I would listen to his “music” while driving or even be able to pick out one composition and say this is one I love.

However, as a movie soundtrack or in the elevator going up to the top of One World Trade center I think it’s perfect. “Richard Devine is an Atlanta-based electronic musician and sound designer. Devine has designed sound patches for NI’s Absynth, Reaktor, Battery and Massive. He has also scored commercials for Nike, Touchstone Pictures and engineered and performed his own music worldwide.” – Wikipedia For more info: richard-devine.com.