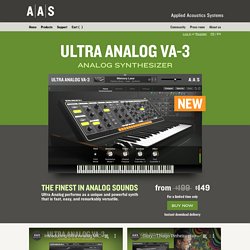 Richard Devine, Christian Halten, Jerry Kovarsky, Christian Laffitte, Niall McCallum, Adam Pietruszko, Thiago Pinheiro, Daniel Stawczyk, and Emeric Zubar form an incredible team that made the most of the latest Ultra Analog VA-3 features. It’s with great pride that we present these new signature sounds. Each and every sounds of the legacy Ultra Analog VA-2 library went under the eyes of all team members to exit with a consistent gain-stage, unity-gain effects, better dynamics, and compelling real-time sound transformation assignments to take advantage of the new features of Ultra Analog VA-3. That’s an extra 648 solid sounds in your hands. RAW-Kick virtual kick drum synthesizer. Buy now €79 | $79 RAW-Kick is a product developed in conjunction with DJ Free-K and DJ Promo. 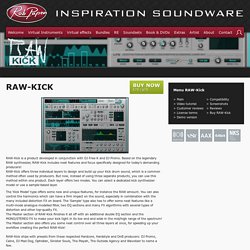 Based on the legendary RAW synthesizer, RAW-Kick includes neat features and focus specifically designed for today’s demanding producers! RAW-Kick offers three individual layers to design and build up your Kick drum sound, which is a common method often used by producers. But now, instead of using three separate products, you can use this method within one product. Each layer offers two modes. The ‘Kick Model’ type offers some new and unique features, for instance the RAW amount.

Live Stream 11 June 2019 B.I.T. -Virtual Analog Synthesizer - Rob Papen BIT virtual synthesizer. Buy now €99 | $99 B.I.T. stands for Back In Time… Instead of combining the best of analog modeling with hybrid synthesis, which we can see with the other Rob Papen synthesizers, B.I.T. focuses on Analogue Modelled Synthesis. 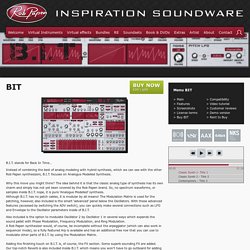 Why this move you might think? The idea behind it is that the classic analog type of synthesis has its own charm and simply has not yet been covered by the Rob Papen brand. So, no spectrum waveforms, or samples inside B.I.T. nope, it is pure ‘Analogue Modelled’ synthesis. Also included is the option to modulate Oscillator 2 by Oscillator 1 in several ways which expands the sound pallet with Phase Modulation, Frequency Modulation, and Ring Modulation. Rob Papen Vecto virtual synthesizer. Buy now €99 | $99 Vecto was originally created for the Propellerhead Reason RE platform, however we have received many requests asking if this great synthesizer also could be available for other platforms. 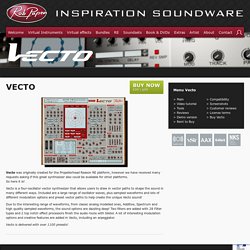 So here it is! Vecto is a four-oscillator vector synthesizer that allows users to draw in vector paths to shape the sound in many different ways. Included are a large range of oscillator waves, plus sampled waveforms and lots of different modulation options and preset vector paths to help create the unique Vecto sound! Due to the interesting range of waveforms, from classic analog modelled ones, Additive, Spectrum and high quality sampled waveforms, the sound options are dazzling deep! 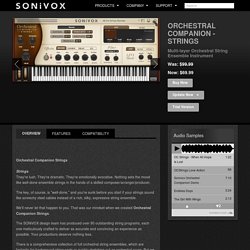 They're lush. They're dramatic. They're emotionally evocative. Nothing sets the mood like well-done ensemble strings in the hands of a skilled composer/arranger/producer. The key, of course, is "well-done," and you're sunk before you start if your strings sound like screechy steel cables instead of a rich, silky, expressive string ensemble. SONiVOX - Orchestral Companion - Brass. Orchestral Companion Brass When you need to add real brass to your project for that "just so" feel, nothing less than the real thing will do. 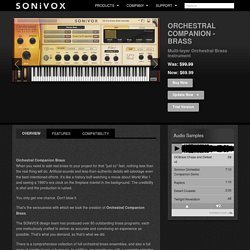 Artificial sounds and less-than-authentic details will sabotage even the best-intentioned efforts. It's like a history buff watching a movie about World War I and seeing a 1960's-era clock on the fireplace mantel in the background. The credibility is shot and the production is ruined. You only get one chance. U-HE Tyrell N6 Tutorial for Beginners & Pros. Synths : Reaktor 6 : Connect.