Chuck Berry: His colourful life in pictures. Jaco Pastorius Bass Solo - Live with the Weather Report - Offenbach Germany 1978' Jaco Pastorius bass Solo at Live under the sky 1984. Kaitdunton.com. Vinnie Colaiuta - John McLaughlin - Gary Husband - Matthew Garrison: Maharina. Stevie Ray Vaughan and Dick Dale Play "Pipeline" — a Video That's Got It All. The video below, a clip of Stevie Ray Vaughan and Dick Dale performing "Pipeline," one of the most famous surf-guitar instrumentals of all time, has got it all. 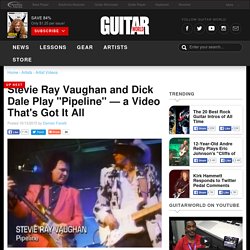 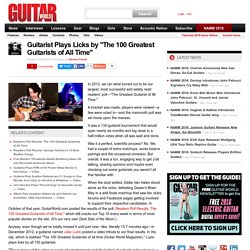 " A bracket was made, players were ranked—a few were voted in—and the mammoth poll was set loose upon the masses. It was a 132-guitarist tournament that would span nearly six months and log close to a half-million votes when all was said and done. Was it a perfect, scientific process? No. We had a couple of extra matchups, some bizarre pairings and the occasional omission. When the dust settled, Eddie Van Halen stood alone as the victor, defeating Queen's Brian May in a wild finals matchup that saw fan clubs, forums and Facebook pages getting involved to support their respective candidates. Anyway, even though we've totally missed it until just now—like, literally 13.7 minutes ago—in December 2012, a guitarist named João Luzio posted a video tribute to our final results. How David Bowie Helped Launch Stevie Ray Vaughan's Career. Stevie Ray Vaughan talks David Bowie in 1986. 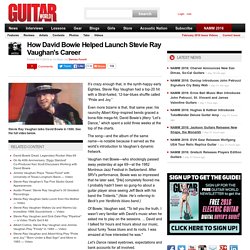 See the full video below. It’s crazy enough that, in the synth-happy early Eighties, Stevie Ray Vaughan had a top-20 hit with a Strat-fueled, 12-bar-blues shuffle called “Pride and Joy.” Even more bizarre is that, that same year, his raunchy Albert King–inspired bends graced a bona-fide mega-hit, David Bowie’s jittery “Let’s Dance,” which spent a solid three weeks at the top of the charts. The song—and the album of the same name—is notable because it served as the world’s introduction to Vaughan’s dynamic fretwork. Vaughan met Bowie—who shockingly passed away yesterday at age 69—at the 1982 Montreux Jazz Festival in Switzerland. Of Bowie, Vaughan said, "To tell you the truth, I wasn't very familiar with David's music when he asked me to play on the sessions. ... 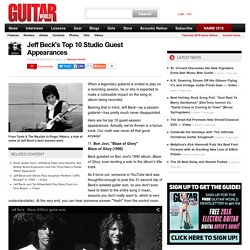 When a legendary guitarist is invited to play on a recording session, he or she is expected to make a noticeable impact on the song or album being recorded. Bearing that in mind, Jeff Beck—as a session guitarist—has pretty much never disappointed. Here are his top 10 guest-session appearances. Actually, we've thrown in a bonus track. Our math was never all that good anyway! Ghosts in the Metheny machine. The jazz band at Manhattan's Legacy Studios is swinging: piano, vibes, bass, two guitars, percussion and drums in fast, syncopated flow. 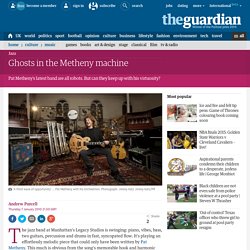 It's playing an effortlessly melodic piece that could only have been written by Pat Metheny. This much is obvious from the song's memorable hook and harmonic complexity, but also because he is the only musician in the room. The instruments are playing themselves. The marimba belongs to Metheny's old friend and collaborator Gary Burton, but the mallets are being operated by robots, controlled remotely by computers in the next room. The kit, on loan from drummer Jack DeJohnette, has been deconstructed and strung on wires from a steel frame. Wandering around as the music plays – we are, Metheny tells us, "the first civilians to see this" – is a thrilling, disorienting experience.