Another Pip-Boy, this time with wearable working controls! Adam Adamowicz Fallout 3 Concepts. Scratch Pepakura Pipboy 3000. In prep for Halloween this year I wanted to make another Pipboy 3000. 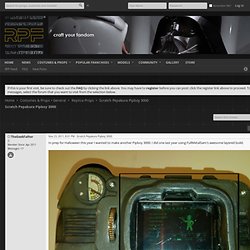 I did one last year using FullMetalSam's awesome layered build. pipboy alterations by kender325, on FlickrThis year I wanted something a little more accurate, but I couldn't find a good pep file for it. So I've been doing one from scratch. Snagged the mesh from in game, cleaned up said mesh (nightmare) Scratched the first attempt. Second attempt isn't the best. The mark two is ok. Pep Opn Eg by kender325, on FlickrCurrently working on the rest of the main body. Pip-Boy 3000 Build-up (pic heavy) - Page 2. As I mentioned previously, I used a cut-to-size piece of plexi-glass for the screen. 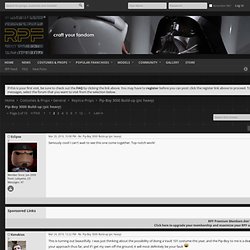 Behind this I mounted a sized screen shot from the game that I printed with a color printer. I had to play around with the brightness and the contrast of the image to get it to look right once it was back-lit. It wasn't quite a simple as print screen, copy, paste, print . Behind this I cut a piece of clear plastic from an document holder, just to give the paper a little extra protection should any sweat get up in there. I used plain old scotch tape to secure all 3 together, then I used dabs of hot glue at the corners to hold it into place.Behind this I hot glued 1 layer of the green lighting film, and behind the green film I mounted the LED screen.

If you have big meaty forearms, this may not be the prop for you, though. FALLOUT 3: Pip-Boy 3000 Replica is Jaw-Dropping. To all of you Fallout fans out there, this is something to be in complete awe of. 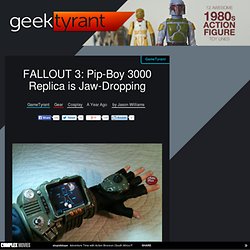 Check out this fantastic Fallout 3 Pip-Boy 3000 replica made by Zachariah Perry. It looks like it perfectly hopped right out of the game and into the real world. Although it seems he is not selling this, who knows, you may be able to hit him up with the perfect price and he will accept. A wearable Pipboy 3000. Projects: Making a Pipboy-3000. I went to San Diego Comic-Con 2011 dressed as a vault-dweller, and I wore a custom Pipboy 3000 prop that I made myself. 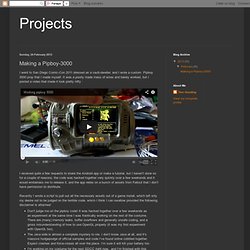 It was a poorly made mess of wires and barely worked, but I posted a video that made it look pretty nifty : I received quite a few requests to share the Android app or make a tutorial, but I haven't done so for a couple of reasons; the code was hacked together very quickly over a few weekends and it would embarrass me to release it, and the app relies on a bunch of assets from Fallout that I don't have permission to distribute. Recently I wrote a script to pull out all the necessary assets out of a game install, which left only my desire not to be judged on the terrible code, which I think I can swallow provided the following disclaimer is attached: A 3D printable Pip-Boy 3000. Ever wanted a Pip-boy 3000 from the Fallout series? 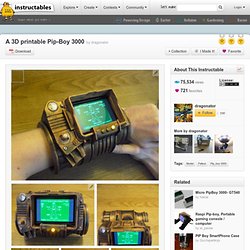 Now is your chance. In this instructable I have all files to print your own. It is hollow and can hold anything. You can put a paper screen in to make it look like a working Pip-Boy, or put a smart phone in to make it functional. It is designed to be as close to an actual Pip-Boy as 3D printing can print. What is included in this instructable The files for this can be downloaded in the attachments or on my thingiverse page. I have two zip fodders. Also there is a pdf file. What will you need To make this you will need: Pip-Boy 3000 by dragonator.

To make one, print one of every part, print the PDF attached for the Geiger counter. 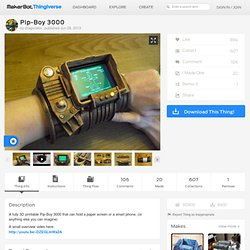 Geiger counter was derived from this: More photo's and instructions, go to the instructables page: Assemble using glue and 5 M4 cylindrical screws and 2 M3 cylindrical screws. Paint it as you like. For everyone that wants to experiment with the model, improve on it or modify it for different use: I have included the Step file of the original shapemodel. If you build or modify one, please share and credit.

(I do not own any of the original design, they belong to Bethesda Softworks. Pip-Boy 3000. The Pip-Boy 3000 is a safe, secure piece of Pre-War technology. 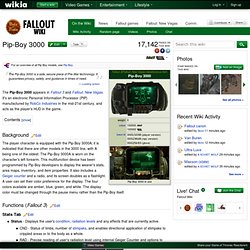 It guarantees privacy, safety, and guidance in times of need. ”— Loading screen The Pip-Boy 3000 appears in Fallout 3 and Fallout: New Vegas. It's an electronic Personal Information Processor (PIP) manufactured by RobCo Industries in the mid-21st century, and acts as the player's HUD in the game. Background Edit The player character is equipped with the Pip-Boy 3000A; it is indicated that there are other models in the 3000 line, with A being one of the oldest. Functions (Fallout 3) Stats Tab Edit Items Tab Weapons - Lists all weapons that the user is carrying, and allows the user to repair them. Pip-Boy 3000.