Same-sex Marriage in Australia: What changes for same-sex couples? Introduction On 7 September 2017, it was confirmed that a postal vote on same-sex marriage would go ahead this year after the High Court dismissed a challenge against it. 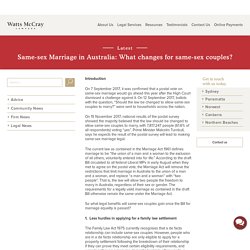 On 12 September 2017, ballots with the question, “Should the law be changed to allow same-sex couples to marry?” Were sent to households across the nation. On 15 November 2017, national results of the postal survey showed the majority believed that the law should be changed to allow same-sex couples to marry, with 7,817,247 people (61.6% of all respondents) voting “yes”. Prime Minister Malcolm Turnbull, says he expects the result of the postal survey will lead to making same-sex marriage legal. The current law as contained in the Marriage Act 1961 defines marriage to be “the union of a man and a woman to the exclusion of all others, voluntarily entered into for life.” So what legal benefits will same-sex couples gain once the Bill for marriage equality is passed? 1. 2. 3. 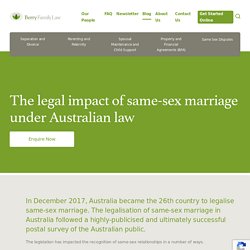 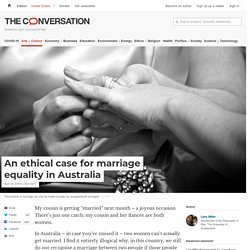 There’s just one catch: my cousin and her fiancee are both women. In Australia – in case you’ve missed it – two women can’t actually get married. I find it entirely illogical why, in this country, we still do not recognise a marriage between two people if those people are both of the same sex. With this in mind I would like to ask a very simple question: are there any ethical reasons why we, as a society, should be opposed to marriage equality? I have two very brief qualifiers for this discussion. The position I want to argue for here is that marriage can, and should be, a loving and legal union between two people. Second, I am talking about a legal union.

Australia is all about freedom of belief, right? Ethical considerations can be discussed using one of several ethical frameworks that have been developed over the last 2,500 years. UtilitarianismDeontologyVirtue Theory Utilitarianism Deontology Virtue ethics. Competing Rights in the Same-Sex Marriage Debate - ABC Religion & Ethics. Margaret Somerville is Professor of Bioethics in the School of Medicine at the University of Notre Dame Australia. 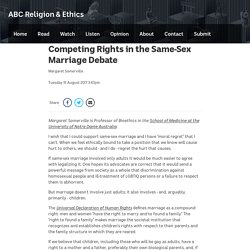 I wish that I could support same-sex marriage and I have "moral regret" that I can't. When we feel ethically bound to take a position that we know will cause hurt to others, we should - and I do - regret the hurt that causes. If same-sex marriage involved only adults it would be much easier to agree with legalizing it. One hopes its advocates are correct that it would send a powerful message from society as a whole that discrimination against homosexual people and ill-treatment of LGBTIQ persons or a failure to respect them is abhorrent. But marriage doesn't involve just adults; it also involves - and, arguably, primarily - children. The Universal Declaration of Human Rights defines marriage as a compound right: men and women "have the right to marry and to found a family.

" Ethical arguments against same-sex marriage laws - ABC Religion & Ethics. There is a bill before the Australian Parliament to change the current definition of marriage to allow same-sex couples to marry. 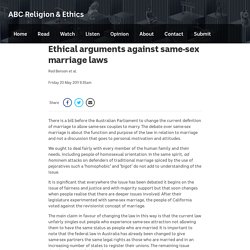 The debate over same-sex marriage is about the function and purpose of the law in relation to marriage and not a discussion that goes to personal motivation and attitudes. We ought to deal fairly with every member of the human family and their needs, including people of homosexual orientation. In the same spirit, ad hominem attacks on defenders of traditional marriage spiced by the use of pejoratives such a "homophobic" and "bigot" do not add to understanding of the issue. It is significant that everywhere the issue has been debated it begins on the issue of fairness and justice and with majority support but that soon changes when people realise that there are deeper issues involved.