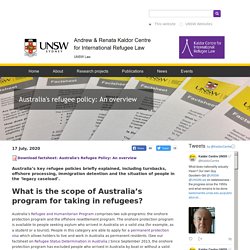 What is the scope of Australia’s program for taking in refugees? Australia’s Refugee and Humanitarian Program comprises two sub-programs: the onshore protection program and the offshore resettlement program. The onshore protection program is available to people seeking asylum who arrived in Australia on a valid visa (for example, as a student or a tourist). People in this category are able to apply for a permanent protection visa which allows holders to live and work in Australia as permanent residents. The offshore resettlement program contains three categories: Refugee, Special Humanitarian, and Community Support Program (CSP). What is Operation Sovereign Borders? Administrative Appeals Tribunal. The Guide to Refugee Law in Australia contains an analysis of the legal issues relevant to the assessment of protection visas, focusing particularly on the determination of refugee status and complementary protection in Australia. 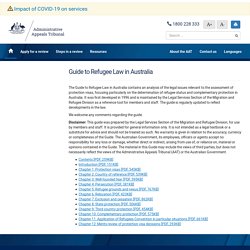 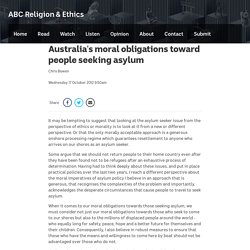 Or that the only morally acceptable approach is a generous onshore processing regime which guarantees resettlement to anyone who arrives on our shores as an asylum seeker. Some argue that we should not return people to their home country even after they have been found not to be refugees after an exhaustive process of determination.

Having had to think deeply about these issues, and put in place practical policies over the last two years, I reach a different perspective about the moral imperatives of asylum policy. I believe in an approach that is generous, that recognises the complexities of the problem and importantly, acknowledges the desperate circumstances that cause people to travel to seek asylum. Let's be clear, this is not about punishment or punitive actions. Fairness and Equity Safety Conclusion. Refugee Law and Policy: Australia. Back to Refugee Law and Policy Summary Australia’s Refugee and Humanitarian Programme consists of several different visas that are available to refugees and others in need of protection. 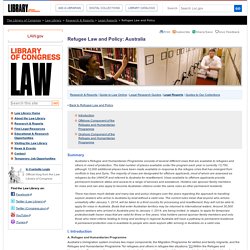 The total number of places available under the program each year is currently 13,750, although 12,000 additional places have been made available in response to the refugee crisis that has emerged from conflicts in Iraq and Syria. The majority of visas are designated for offshore applicants, most of whom are assessed as refugees by the UNHCR and referred to Australia for resettlement. How should we treat refugees? - The Ethics Centre. Then prime minister Tony Abbott’s 2015 announcement that Australia would permanently resettle an additional 12,000 Syrian refugees was a significant response to the mass exodus of asylum seekers. 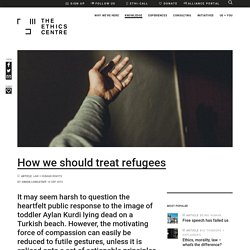 But we should assess the quality of Australia’s offer against a solid foundation of principles. In this case, those principles are the institution of sanctuary or, in its modern guise, asylum. Using this approach, I would suggest that asylum is fundamentally about the public and personal good of human safety. As such: Those who meet the objective condition of fleeing from persecution and oppression, whether arising in conditions of peace or war, are entitled to seek asylum. The Australian debate about asylum seekers and refugees. This paper seeks to offer a brief guide to the ethics of asylum and refugees, focusing in particular on four general questions: What should be the place of empathy and compassion in our moral reasoning with respect to asylum seekers and refugees? 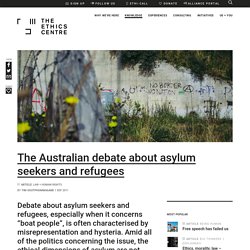 To what extent must any ethical account of refugee policy incorporate concerns about practical or political feasibility? What is the nature of Australia’s moral obligations to asylum seekers and refugees, and to what extent are these shaped by our understanding of membership? Can mandatory detention and offshore processing be ethically justified? It would be a demonstration of good faith if Australia should increase its intake of refugees under its humanitarian program. 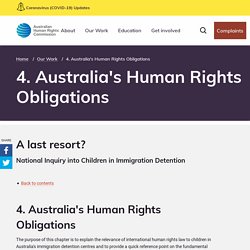