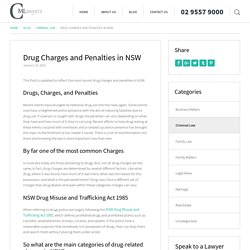 Drugs, Charges, and Penalties Recent events have plunged recreational drug use into the news again. Some events now have a heightened police presence with the aim of reducing fatalities due to drug use. If a person is caught with drugs the penalties can vary depending on what they have and how much of it they’re carrying. Recent efforts to have drug testing at these events coupled with overdoses and a ramped up police presence has brought this topic to the forefront of our reader’s minds. By far one of the most common Charges In Australia today are those pertaining to drugs. NSW Drug Misuse and Trafficking Act 1985 When referring to drugs police are largely following the NSW Drug Misuse and Trafficking Act 1985, which defines prohibited drugs and prohibited plants such as cannabis, amphetamines, ecstasy, cocaine, and opiates.

Drugs in nsw myths and realities final. Quick guide drug laws nsw. Debate Continues on proposed ‘three strike’ NSW drug decriminalisation policy: An Interview with Greens MP and Drug Law Reform and Harm Reduction Spokesperson, Cate Faehrmann. Australia’s recreational drug policies aren’t working, so what are the options for reform? Some of the greatest harms from using illicit drugs are because they are illegal. 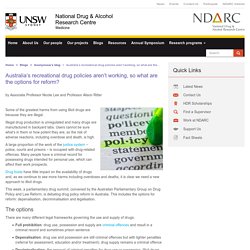 Illegal drug production is unregulated and many drugs are manufactured in backyard labs. Users cannot be sure what’s in them or how potent they are, so the risk of adverse reactions, including overdose and death, is high. A large proportion of the work of the justice system – police, courts and prisons – is occupied with drug-related offences. Many people have a criminal record for possessing drugs intended for personal use, which can affect their work prospects. Drug busts have little impact on the availability of drugs and, as we continue to see more harms including overdoses and deaths, it is clear we need a new approach to illicit drugs. Why the NSW proposal to 'depenalise' drug possession has prompted such a vicious backlash. The New South Wales government is considering a proposal to dramatically decrease penalties for illicit drug possession in the state. 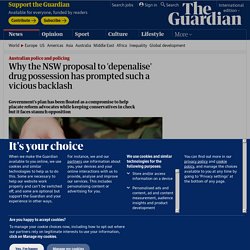 The policy, which is currently before cabinet, has been widely welcomed by health experts, drug policy reform groups and parents of young people who have died as a result of drug overdoses at music festivals. But just days after it was first reported, the policy is facing a vicious backlash from members of the government’s conservative wing, as well as tabloid media and talkback radio. But what is the policy, and why is it proving so controversial? What is it? The government has declined to publicly discuss the policy in detail, but its basic tenets are fairly straightforward. Under the proposal before cabinet, a person caught with a small quantity of an illicit drug could be issued a warning, rather than a criminal charge. Only if the person was caught a fourth time in the same period would they be charged with an offence.

The scheme is not perfect. Well, no. For a more rational, tolerant and humanitarian approach to the problems created by drugs and drug use in Australia. NSW system of drug depenalisation: A modest step towards inevitable decriminalisation - Criminal Law - Australia. At a 30 November meeting, NSW government cabinet ministers discussed a three-tiered system of depenalisation for the offence of personal drug possession. 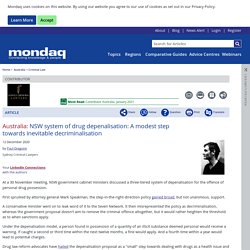 First spruiked by attorney general Mark Speakman, the step-in-the-right-direction policy gained broad, but not unanimous, support. A conservative minister went on to leak word of it to the Seven Network. It then misrepresented the policy as decriminalisation, whereas the government proposal doesn't aim to remove the criminal offence altogether, but it would rather heighten the threshold as to when sanctions apply. Under the depenalisation model, a person found in possession of a quantity of an illicit substance deemed personal would receive a warning. If caught a second or third time within the next twelve months, a fine would apply.

Drug law reform advocates have hailed the depenalisation proposal as a "small" step towards dealing with drugs as a health issue and not a crime.