Meet the Ocean's Newest Carnivorous Sponge - Atlas Obscura. Sea sponges seem like some of the gentler denizens of the oceans, but not all of the thousands of species in the phylum are placid filter feeders, consuming bacteria and whatever other particles the water brings to them. 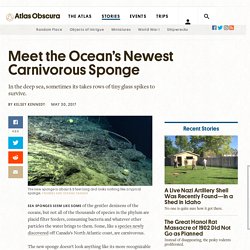 Some, like a species newly discovered off Canada’s North Atlantic coast, are carnivorous. The new sponge doesn’t look anything like its more recognizable cousins. Rather than a colorful, bulbous body, it’s spindly and over six feet long, with a bunch of tiny glass spikes along its arms to ensnare prey. That prey is zooplankton: small organisms, such as crustaceans, that feed on other (often microscopic) marine organisms. The species was first spotted in 2010 by scientists on a Canadian Coast Guard ship with a remotely operated vehicle, according to a statement from Fisheries and Oceans Canada.

Carnivorous sponges aren’t limited to any particular depth or region. The House That Snot Built. Meet the giant larvacean. 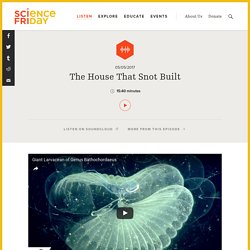 A relative of the sea squirt, this marine invertebrate lives in the upper hundred meters of the ocean, is about the size of your pinky, and every day builds itself a mucus “house” more than a meter across. By filtering water through its house, the organism traps food particles that drift down from above. Atlasobscura. It was a calm day on the Pacific Ocean. 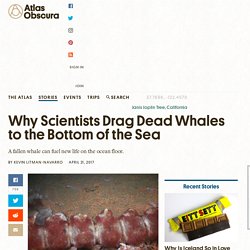 Perfect conditions for a sunset sailing cruise, or maybe a kayaking trip. But on April 11, 2007, scientists at the Monterey Bay Aquarium Research Institute (MBARI) had no time for such frivolity. Their mission? Just how smart is an octopus? Callum Roberts is a professor of marine conservation at the University of York in Britain and the author of “The Ocean of Life: The Fate of Man and the Sea.” 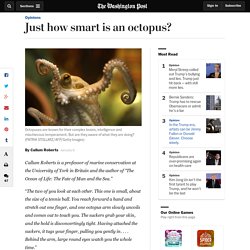 “The two of you look at each other. This one is small, about the size of a tennis ball. You reach forward a hand and stretch out one finger, and one octopus arm slowly uncoils and comes out to touch you. The suckers grab your skin, and the hold is disconcertingly tight. Having attached the suckers, it tugs your finger, pulling you gently in. . . . Encountering an octopus in the wild, as Peter Godfrey-Smith argues in his fascinating book, “Other Minds,” is as close as we will get to meeting an intelligent alien. Cephalopods certainly look alien, so it is hardly surprising that science fiction writers have hijacked their characteristics for imaginary aliens. This sea slug steals plant genes to live like a leaf. E. chlorictica snatches genes to keep its stolen chloroplasts thriving. 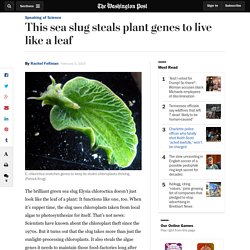 (Patrick Krug) The brilliant green sea slug Elysia chloroctica doesn't just look like the leaf of a plant: It functions like one, too. When it's supper time, the slug uses chloroplasts taken from local algae to photosynthesize for itself. That's not news: Scientists have known about the chloroplast theft since the 1970s. But it turns out that the slug takes more than just the sunlight-processing chloroplasts. Seismic 'CT scans' reveal deep earth dynamics. Behind the stunning White Cliffs of Dover, scientists unlock a mystery of algae.

The White Cliffs of Dover. 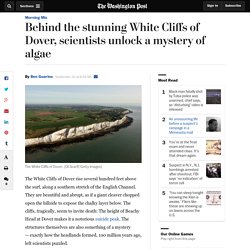 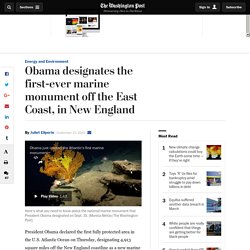 Paramuricea coral in Nygren Canyon which is 165 nautical miles southeast of Cape Cod, Mass. (NOAA) Scientists crack mystery of the shrimp with a big punch: It can split your thumb. Mantis shrimp. 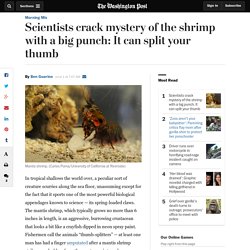 (Carlos Puma/University of California at Riverside) Expert warns 2016 could see a record number of shark attacks, but remember, accidental drownings are way more common. A shark expert at the University of Florida predicts there will be more shark attacks around the world this year, surpassing last year's record number. 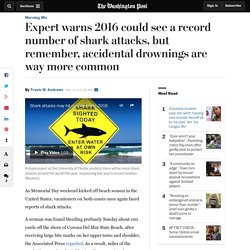 (Reuters) As Memorial Day weekend kicked off beach season in the United States, vacationers on both coasts once again faced reports of shark attacks. A woman was found bleeding profusely Sunday about 100 yards off the shore of Corona Del Mar State Beach, after receiving large bite marks on her upper torso and shoulder, the Associated Press reported. As a result, miles of the sandy Newport Beach, Calif., shoreline were shut down through Monday.

The woman’s condition is unknown, but she was conscious when brought to the hospital. Across the country that same day, a 13-year-old boy was bitten on the calf by a nearly 6-foot-long shark while he was wading in waist-high water in Neptune Beach, Fla., which is about 17 miles east of Jacksonville. A sea sponge the size of a minivan could be one of the world’s oldest living animals. During an expedition aboard NOAA's Okeanos Explorer at a depth of 7,000 feet, scientists discovered a sponge that measured 12 feet long and 7 feet wide. 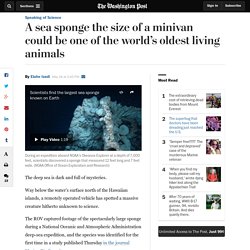 (NOAA Office of Ocean Exploration and Research) The deep sea is dark and full of mysteries. Seas Are Rising at Fastest Rate in Last 28 Centuries. Closing In on Where Eels Go to Connect. Photo Eels hold tight to their biological secrets, so much so that Aristotle mused that they must be sexless creatures spontaneously emerging from the “earth’s guts.” Now, at least one eel enigma is finally a step closer to being solved. Disappearing act: Scientists have discovered how ocean fish turn invisible. By Mike DeBonis November 19 at 2:09 PM The House on Thursday overwhelmingly passed legislation aimed at tightening controls on refugees from Syria and Iraq, in what Republican leaders say is a swift and strong response to last week’s terror attacks in Paris. The vote was 289 to 137. The bill’s fate, however, is uncertain after President Obama delivered a veto threat Wednesday and key senators said they are more concerned about security vulnerabilities other than the refugee program. The vote gives House Republicans some leverage because Thursday’s tally is enough to override a veto with more than two-thirds of those voting supporting the bill, including 47 Democrats.

“This reflects our values; this reflects our responsibilities,” House Speaker Paul D. Exxon Mobil Under Investigation in New York Over Climate Statements. Photo. 'Monster in a Barrel,' Spooky Ocean Drifters - Science Friday. In 1979, the cult classic sci-fi thriller Alien unleashed one of the most blood-chilling monsters in movie history. When it lurches from a dark spaceship vent (or a human chest), we feel Ripley’s fear. The alien’s terrifying traits were inspired by an amalgam of sources, especially a type of parasitic wasp, according to Roger Luckhurst, author of a recent book about the flick. Mexico deploys its navy to face its latest threat: monster seaweed. By Joshua Partlow and Gabriela Martinez October 28 at 8:05 PM CANCUN, Mexico — Surrounded by a four-man camera crew, the Japanese honeymooners were ready to make memories. Why scientists are worried about the ice shelves of Antarctica.

The pink pill is here, but the quest to understand female desire is far from over By Brigid Schulte October 14, 2015. Scientists say a dramatic worldwide coral bleaching event is now underway.