DCLabs - Grasshopper Resources. Back to Bricks. After the unsuccessful event of the “tumbler wall” here, I decided to return to the brick wall study, but this time starting from easy steps. 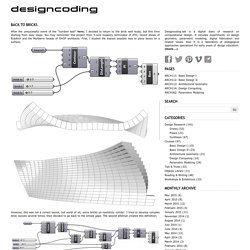 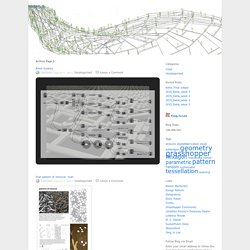 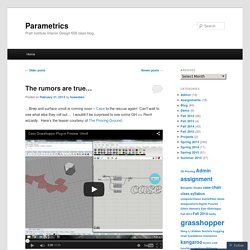 FANCYWIRES. Gallery installation designed and fabricated in collaboration with SOFTlab. 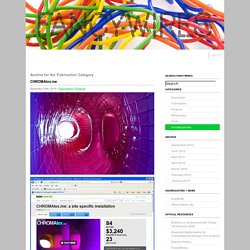 Laser cutter utility definition to section a blob, project registration lines from layers above or below, hollow out the sections, label each piece from each section and lay out the sections (mirroring the sections from below) in a grid. Blob by Maya. The definition has neither been cleaned up, nor annotated with the intention of others using it. Buyer beware. Until I add documentation see here for some screenshots of the definition in action. More to follow on the making of… Gh-1. Crtl-i » Patterns. This is a rhinoscript where you can set various points where vectors flow out from according to a certain velocity. 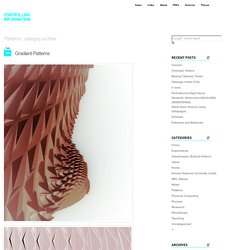 As these vectors travel, the flows are attracted to the various attractor points in different weights three dimensionally. It simulates a close logic to the emitted particles being attracted to newton forces in Maya. Option Explicit. Self Shading Insulated Glass Unit (SSIGU) – Collaborative Research with EnneadLab - Thornton Tomasetti. Ennead Architects recently approached us to collaboratively submit an entry for a custom designed self shading insulated glazing unit for the TexFab competition. 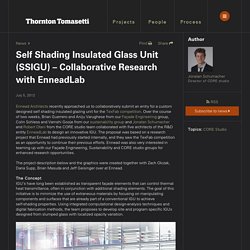 Over the course of two weeks, Brian Guerrero and Aniju Varughese from our Façade Engineering group, Colin Schless and Vamshi Gooje from our sustainability group and Jonatan Schumacher and Robert Otani from the CORE studio team collaborated with five architects of the R&D entity EnneadLab to design an innovative IGU. The proposal was based on a research project that Ennead had previously started internally, and they saw the TexFab competition as an opportunity to continue their previous efforts.

Ennead was also very interested in teaming up with our Façade Engineering, Sustainability and CORE studio groups for enhanced research opportunities. The project description below and the graphics were created together with Zach Olczak, Daria Supp, Brian Masuda and Jeff Geisinger over at Ennead. Mostapha Sadeghipour. Ladybug Workshop Part 6/6: Environemntal Analyses. Ladybug Thermal Analysis Tutorial. This tutorial will focus on the thermal analysis components of the LADYBUG plugin in grasshopper. 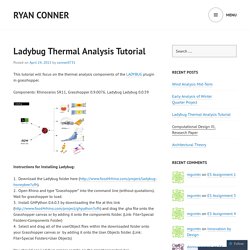 Components: Rhinoceros SR11, Grasshopper 0.9.0076, Ladybug Ladybug 0.0.59 Instructions for Installing Ladybug: Download the Ladybug folder here ( Rhino and type “Grasshopper” into the command line (without quotations). Wait for grasshopper to load.Install GHPython 0.6.0.3 by downloading the file at this link ( and drag the .gha file onto the Grasshopper canvas or by adding it onto the components folder. (Link: File>Special Folders>Components Folder)Select and drag all of the userObject files within the downloaded folder onto your Grasshopper canvas or by adding it onto the User Objects folder. You should see Ladybug appear as tabs on the grasshopper tool bar. Generating Annual Solar Radiation Diagram, Ladybug for Grasshopper, PT 1. Generative Algorithms_CaE_Porous Shell.

Antonio Turiello. Organicités Piraeus Tower. The façade of the building is a freestanding structure. 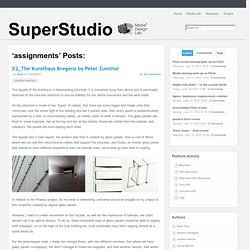 It is somehow hung from above and is punctually attached to the concrete structure to assure stability for the lateral movement and the wind loads. All the structure is made of two “types” of cables, first there are some bigger and longer ones that crisscross over the entire high of the building and are 6 panels wide, then every panel is perpendicularly surrounded by 2 sets of crisscrossing cables, all cables seem to work in tension. The glass panels are fixed to some brackets, two at the top and two at the bottom, those are visible from the outside, and sideways, the panels are over lapping each other.

The façade has 3 main layers, the exterior plan that is created by glass panels, then a void of 90cm, where we can see the crisscrossing cables that support the structure, and finally, an interior glass panel that seems to have different proportions then the outside ones, since they go from floor to sealing. Stacking of Boxes/Volumes (Via Any Method, Kangaroo, etc.) - Need Help/Advice. Hello Grasshopper community, I have a list of geometry boxes, randomly placed in a larger volume. 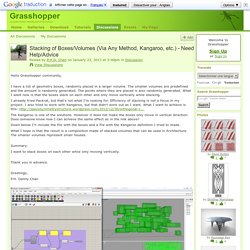 The smaller volumes are predefined and the amount is randomly generated. The points where they are placed is also randomly generated. GBL Script & GH Sample Library. RHINO / GRASSHOPPER WEBINAR. GRADIENT LOUVERS. Aluminium Ventilation Panel with Grasshopper. Thinkparametric. Designplaygrounds.com. Blog. I am excited to be teaching a one-day Interactive Surfaces workshop for the upcoming Facades+ Conference being held in New York City on April 11th-12th. 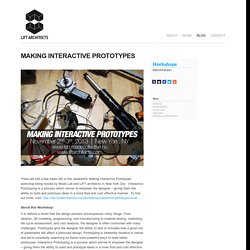 Interlocking Structure in Grasshopper (No Boolean) It has been a tough problem for me, for last two days. Parametric model of an interlocking structure (sometimes also called egg-crate, waffle or contouring structure) can be created easily in Grasshopper using Contour component a couple of list management operations, and a boolean (or region) difference event. Massive Grasshopper Attack!

[Sub]Code. This page is set up to host bits of codes and sample algorithms. Those algorithms are free to be explored or even shared with proper recognition to the author.Please let me know if you reached any interesting result using any piece of the code provided. Before downloading anything from Digital [Sub]stance you consent to the following license agreement Digital [Sub]stance by Marios Tsiliakos is licensed under a Creative Commons Attribution-NonCommercial-ShareAlike 3.0 Unported License. Digitaltoolbox. Course Catalog. LIVE COMPONENTS. Grasshopper.

For designers who are exploring new shapes using generative algorithms, Grasshopper is a graphical algorithm editor tightly integrated with Rhino’s 3-D modeling tools. Unlike RhinoScript, Grasshopper requires no knowledge of programming or scripting, but still allows designers to build form generators from the simple to the awe-inspiring. What is Grasshopper? Example of a grasshopper model to design a sun shading system Grasshopper (GH) is a programming interface for designer.

Instead of using programming languages, it uses a lego-like interface. Development. [FORMul[a]RCH] GRASSHOPPER DEFINITIONS. [FORMul[a]RCH] Rhino ++ Grasshopper – Plethora Project. Plethora-Project.com is an initiative to accelerate computational literacy in the frame of architecture and design.

It aligns with the "show me your screens" motto of the TopLap live-coding group attempting to get rid of Obscurantism in digital design. Directed by Jose Sanchez Contact me at : jomasan@gmail.com Bio: Jose Sanchez is an Architect / Programmer / Game Designer based in Los Angeles, California. He is partner at Bloom Games, start-up built upon the BLOOM project, winner of the WONDER SERIES hosted by the City of London for the London 2012 Olympics.