How to keep your money safe while shopping online? Experts answer. PayQ Be India's First Neo Bank? Will PayQ Be India's First Neo Bank? Shibabrata Bhaumik, Founder and CEO of PayQ & HotelnStudio It started with online payments, then online lending and asset management platforms and now it’s the next generation of banking system called “Neo Bank” PayQ’s Neobank is grabbing the attention of global entrepreneurs & investors. 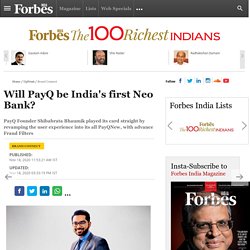 To make banking simple, convenient, and globally accessible without any cross-border interference, PayQ launched its new banking platform for everyone across the globe. PayQ’s burgeoning neo bank, “an investor favorite”; extends an array of digital-banking services to consumers and small businesses remarkably impress global entrepreneurs. With the payments segment crowded and lending platforms up against the realities of India’s tight credit markets, the buzz and the money have shifted towards PayQ’s ‘neo-bank’. Untitled. PayQ powers SMEs to Kiranas, enables Digital billing to Geo tagging.

ANI | Updated: May 20, 2020 18:47 IST New Delhi [India] May 20 (ANI/Digpu): While Paytm, Google Pay, Naspers-owned PayU, and other players were aggressively trying to rope in small businesses on their platform, as B2B doesn't bleed the business, the big scramble is for over 60 million small businesses.The UK based Fintech startup PayQ and its CEO Shibabrata Bhaumik is trying to get them hooked to the PayQ payment gateway and then offering them a host of services, including loans, and easy payment acceptance and settlement to small businesses including Kirana shops and that would lead to an intense battle, where incumbents could face the heat.The coronavirus pandemic might help to achieve India's stated goals of creating a less-cash economy and enhancing financial inclusion. 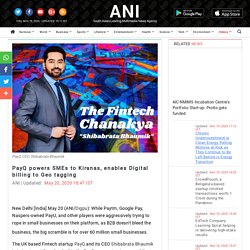 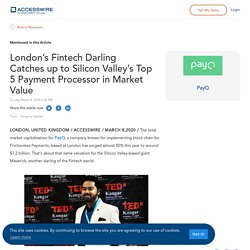 That's about that same valuation for the Silicon Valley-based giant Maverick, another darling of the Fintech world. The CEO and Founder of PayQ, Shibabrata Bhaumik announced in a recent TEDx to expand its horizon of cashless payments for global merchants who are dealing with high-risk industries and assured that PayQ aims to go beyond the traditional payment method to revolutionize the e-commerce industry. He added, "Innovativeness is crucial and it is the cornerstone of PayQ business.

" At the early start of 2020, PayQ has scooped up customers like Big Airline companies from Russia, the early proving ground for PayPal and Stripe. The jockeying between PayQ and Mavrick in market valuations is a bright spot for European entrepreneurship. Inspiring Entrepreneurial Success Stories-Shibabrata Bhamik, Founder of HotelnStudio & PayQ. Shibabrata Bhaumik is an Indian Entrepreneur who founded HotelnStudio, peer-to-peer (P2P) accommodation chain that has identified unmet demands in traditional accommodation systems and allows people to host private accommodation to their peers. 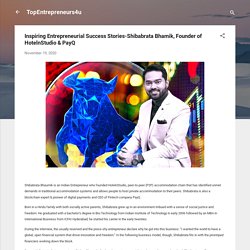 Shibabrata is also a blockchain expert & pioneer of digital payments and CEO of Fintech company PayQ. Born in a Hindu family with both socially active parents, Shibabrata grew up in an environment imbued with a sense of social justice and freedom. He graduated with a bachelor’s degree in Bio-Technology from Indian Institute of Technology in early 2006 followed by an MBA in International Business from ICFAI Hyderabad; he started his carrier in the early twenties. During the interview, the usually reserved and the press-shy entrepreneur declare why he got into this business: “I wanted the world to have a global, open financial system that drove innovation and freedom.” 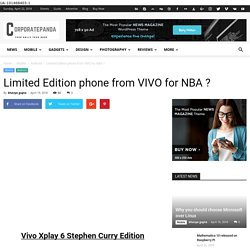