Politics of the EU

It’s Time for Turkey and Europe to Face Reality. The surprise resignation of moderate Turkish Prime Minister Ahmet Davutoglu earlier this month has once again cast doubt on the future of the refugee deal signed in March between Turkey and the European Union. 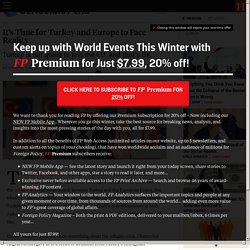 But, whether it moves forward or not, the agreement is just one aspect of the broader Turkish-European relationship. And, in light of political developments in both Ankara and Brussels, it’s high time to rethink what that relationship should look like. Under domestic pressure to do something about the refugee crisis, Chancellor Angela Merkel gave in to a series of demands from Turkey’s strongman president, Recep Tayyip Erdogan, in exchange for the refugee deal. Among these demands — in addition to 6 billion euros and the introduction of visa-free travel to Europe for Turkish citizens — was the promise to open a new chapter in Turkey’s long-delayed accession process to the European Union. But domestic developments in Turkey have not fulfilled the hopes of the country’s supporters. Isn’t Turkey of interest to Europe? – EurActiv.com. European and Turkish leaders damaged relations between their countries following the near-coup in Turkey last month—and there are too many important policy issues at stake, writes Samuel Doveri Vesterbye. 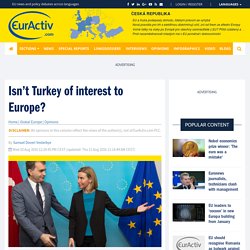 Samuel Doveri Vesterbye is director of the European Neighbourhood Council (ENC). In the weeks following the failed coup attempt in Turkey, an already precarious Turkish-European relationship suffered a few extra blows. European media and government officials were quick to criticise Turkey’s investigations into the ‘Gulen movement’, sometimes without proper context and understanding. At the same time, Turkey continued to fan the flames of populism at home, often criticising the West with no end. Arguments for and against Turkey’s EU membership - Debating Europe. The Turkish economy is thriving. 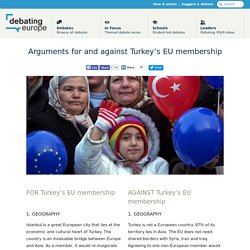 Its GDP growth average for 2014 was around 3.5% and it weathered the global financial downturn much better than most EU nations. Its public finances are the envy of Southern Europe. Per-capital income has increased six-fold and the average Turk is now better off than his or her Romanian and Bulgarian counterparts in the EU. Only New York, London and Moscow have more resident billionaires than Istanbul. It’s Time for Europe to Walk Away From Its Refugee Deal With Turkey. On June 20, the Turkish government’s crackdown on human rights took another turn for the worse when a court placed Sebnem Korur Fincanci, Erol Onderoglu, and Ahmet Nesin in pre-trial detention on charges of “terror propaganda.” 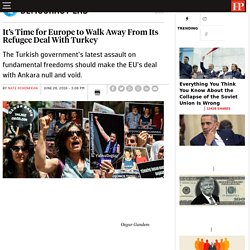 The three were among 44 journalists and activists who have acted as temporary editors for the persecuted pro-Kurdish newspaper, Ozgur Gundem, since its editors-in-chief were imprisoned in early May. Thirty-seven of the 44 temporary editors are under investigation, but these are the first three to be arrested. They face up to 14 1/2 years in prison each. Turkey’s assault on fundamental freedoms has been building steam for years, and especially since the resumption of fighting with the militant Kurdistan Workers’ Party (PKK) last summer, it has become a frequent subject of international coverage.

It’s Time for Turkey and Europe to Face Reality. How to Summarize & Critically Respond to an Article. Definitions of Europeanization. Ladrech (1994: 17): “Europeanization is an incremental process reorienting the direction and shape of politics to the degree that EC political and economic dynamics become part of the organizational logic of national politics and policy-making”. 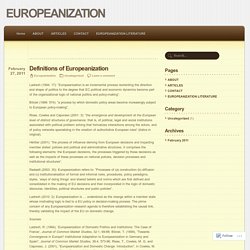 Börzel (1999: 574): “a process by which domestic policy areas become increasingly subject to European policy-making”. Risse, Cowles and Caporaso (2001: 3): “the emergence and development at the European level of distinct structures of governance, that is, of political, legal and social institutions associated with political problem solving that formalizes interactions among the actors, and of policy networks specializing in the creation of authoritative European rules” (italics in original). Héritier (2001): “the process of influence deriving from European decisions and impacting member states’ policies and political and administrative structures.

Sources: <a href=" Our Poll</a> Structure of a Critical Review. Critical reviews, both short (one page) and long (four pages), usually have a similar structure. 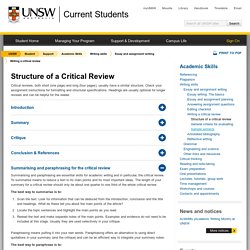 Check your assignment instructions for formatting and structural specifications. Headings are usually optional for longer reviews and can be helpful for the reader. The length of an introduction is usually one paragraph for a journal article review and two or three paragraphs for a longer book review. Include a few opening sentences that announce the author(s) and the title, and briefly explain the topic of the text.

Present the aim of the text and summarise the main finding or key argument.