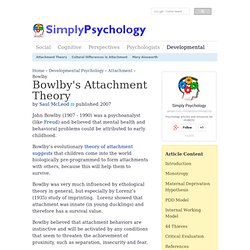 Bowlby’s evolutionary theory of attachment suggests that children come into the world biologically pre-programmed to form attachments with others, because this will help them to survive. Bowlby was very much influenced by ethological theory in general, but especially by Lorenz’s (1935) study of imprinting. Lorenz showed that attachment was innate (in young ducklings) and therefore has a survival value. Bowlby believed that attachment behaviors are instinctive and will be activated by any conditions that seem to threaten the achievement of proximity, such as separation, insecurity and fear. Bowlby (1969, 1988) also postulated that the fear of strangers represents an important survival mechanism, built in by nature. Main Points of Bowlby’s Theory 1. 2. 3. 4. They found 3 progressive stages for distress: 5. Antecedents and outcomes of attachment towards smartphone applications - International Journal of Mobile Communications - Volume 11, Number 4/2013. 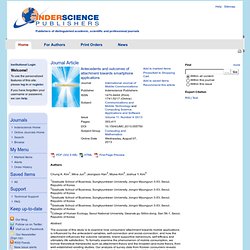 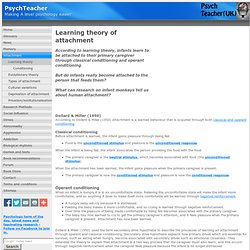 Home. Explanations of attachment Why do babies form attachments? 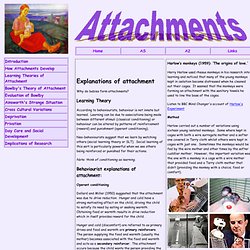 Learning Theory According to behaviourists, behaviour is not innate but learned. Learning can be due to associations being made between different stimuli (classical conditioning) or behaviour can be altered by patterns of reinforcement (reward) and punishment (operant conditioning). Neo-behaviourists suggest that we learn by watching others (social learning theory or SLT). Note: think of conditioning as learning.

Attachment in Foster Care: The Role of Maternal Sensitivity, Adoption, and Foster Mother Experience. Attachment Theory: How Early Attachments Shape Behavior. Attachment theory is focused on the relationships and bonds between people, particularly long-term relationships including those between a parent and child and between romantic partners. 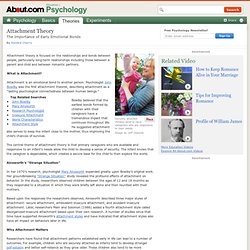 What is Attachment? Attachment is an emotional bond to another person. Psychologist John Bowlby was the first attachment theorist, describing attachment as a "lasting psychological connectedness between human beings. " Bowlby believed that the earliest bonds formed by children with their caregivers have a tremendous impact that continues throughout life. He suggested attachment also serves to keep the infant close to the mother, thus improving the child's chances of survival. The central theme of attachment theory is that primary caregivers who are available and responsive to an infant's needs allow the child to develop a sense of security. Ainsworth's "Strange Situation" In her 1970's research, psychologist Mary Ainsworth expanded greatly upon Bowlby's original work.