As a leading garbage disposal company in the GTA, Core Mini Bins is all about professional service and customer satisfaction.

Scientists Plan to Mimic Plastic-loving Caterpillar’s Abilities. The world’s plastic build-up could be gone within the next few decades thanks to a species of caterpillar that eats plastic bags. 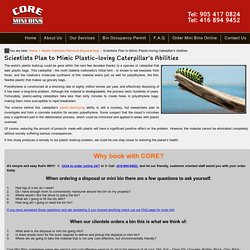 This caterpillar - the moth Galleria mellonella’s initial form - is known to eat beeswax from hives, and the creature’s molecular synthesis of this material works just as well for polyethylene, the thin, flexible plastic that makes up grocery bags. Polyethylene is constructed at a shocking rate of eighty million tonnes per year, and effectively disposing of it has been a long-time problem. Waterloo Encounters a Green Bin Shortage while Garbage Rules Change. Waterloo Region has recently changed its policy on urban waste collection, and they’ve encountered a problem. 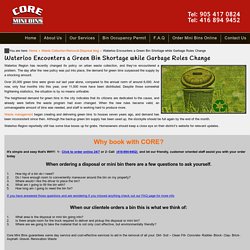 The day after the new policy was put into place, the demand for green bins surpassed the supply by a shocking amount. Over 20,000 green bins were given out last year alone, compared to the annual norm of around 6,000. Core Mini Bins, The Preferred Choice for Excavation Projects in Toronto. Every new construction project begins with an Excavation. 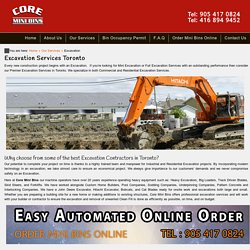 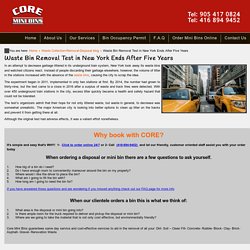 Instead of people discarding their garbage elsewhere, however, the volume of litter in the stations increased with the absence of the waste bins, causing the city to scrap the idea. The experiment began in 2011, implemented in only two stations at first. Ohio Inmates Construct Computers out of Trash to Obtain Internet Connection. A 2015 incident has been released to the public about two prisoners in an Ohio jail who created personal computers from discarded electronic parts. 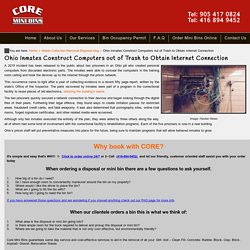 The inmates were able to conceal the computers in the training room ceiling and hook the devices up to the internet through the prison network. This occurrence came to light after a year of collecting evidence in a recent fifty page report, written by the state’s Office of the Inspector. The parts recovered by inmates were part of a program in the correctional facility to reuse pieces of old electronics, reducing the building’s waste. The two prisoners quickly secured a network connection to their devices and began looking through the digital files of their peers. Longtime Nurse Turns Hospital’s Trash into Treasure. Ever wonder what happens to the many plastic parts used to maintain hospital tools when they’re no longer needed? 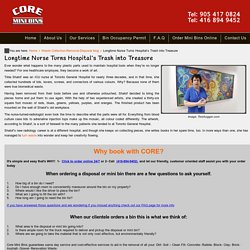 For one healthcare employee, they become a work of art. How One NGO is Using Recycled ‘Mata Ki Chunni’ to Make Wedding Dresses for the Under-Privileged. An Indian wedding is a big event in just about all possible ways. 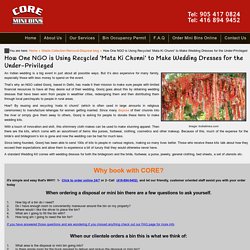 But it’s also expensive for many family, especially those with less money to spend on the event. The First Ever Thrift Mall has Opened in Sweden. If you enjoy hunting for good deals and being eco-friendly, you’ll love the new mall in Eskilstuna, Sweden, that exclusively houses secondhand products in both original and repaired condition. 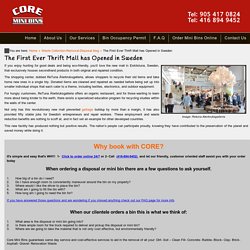 The shopping center, dubbed ReTuna Återbruksgalleria, allows shoppers to recycle their old items and take home new ones in a single trip. Donated items are cleaned and repaired as needed before being set up into smaller individual shops that each cater to a theme, including textiles, electronics, and outdoor equipment. For hungry customers, ReTuna Återbruksgalleria offers an organic restaurant, and for those wanting to learn more about being kinder to the earth, there exists a specialized education program for recycling studies within the walls of the center. Core Mini Bins offers Premier Excavation Services in Toronto. Core Mini Bins, The Preferred Choice for Rubble Disposal Services. Along with Mini Disposal, here at Core Mini Bins we offer full Disposal Services on 10 Yard Bins, 14 Yard Bins, 20 Yard Bins and 40 Yard Bins. 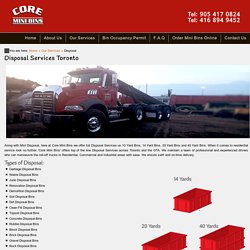 When it comes to residential service look no further. 'Core Mini Bins' offers top of the line Disposal Services across Toronto and the GTA. We maintain a team of professional and experienced drivers who can manoeuvre the roll-off trucks in Residential, Commercial and Industrial areas with ease. Core Mini Bins - Industrial Excavation Services at Competitive Prices. Got Garbage? Get a Fire-Breathing Drone. There could be no need for dumps or days dedicated to street cleaning in the future thanks to a utility company located in the Chinese city of Xiangyang. 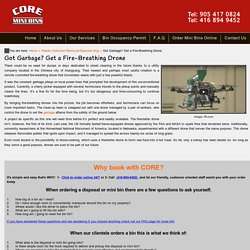 Bottle Deposits to End Plastic Ocean Pollution. Volvo’s First Electric Car is Coming Fast. The company’s first electric car is expected by 2019 and costs $40,000. More details have been revealed by Volvo about the car it plans to bring to market in 2019. The company told automotive news that the car’s range will be 250 miles and it will cost between $35,000-$40,000 for a starter model. This is the latest development in a market battle among the automotive giants. They want to compete with companies like GM by producing long-range electric vehicles that can be mass marketed and outdo previous versions. The Chevy Bolt by GM starts at $36,620 and comes with a 238-mile range. However, Volvo has yet to provide details on the specific kind of electric vehicle it will bring to market in 2019. Core Mini Bins provides Quality Topsoil Delivery at Affordable Prices. Core Mini Bins offers Superior Garbage Removal Services in Richmond Hill.

Core Mini Bins has a team of professionals who help people to get rid of waste, garbage and junk and provide bins for rentals. We offer a wide variety of small to large sized bins that are made ideal to suit your residential, domestic, commercial or official waste. Exercise Clothes, Yoga Pants may be #1 Cause of Sea Pollution. According to scientists and researchers from the Gulf Coast, comfy clothes are a major culprit when it comes to the plastic that's being found in oceans and perhaps even getting into seafood. A 2-year long study has begun to examine microscopic plastics in the Texas and Florida Keys waters.

The initiative, headed by Mississippi-Alabama Sea Grant Consortium will also look into the fact that an alarming amount of microfibers — even tinier than microbeads — were found trickling down faucets and drains. Yoga bottoms, fleece-lined coats, sweat-resistant athletic gear and other clothing produced from synthetic material sheds microscopic plastic fibers — also known as "microfibers" — when laundered. Wastewater systems flush the microfibers into natural waterways, eventually reaching the sea. Marine animals can even ingest these harmful microfibers. Core Mini Bins, The Top Choice for Mini Bin Rentals. Here is Your Daily Reminder to Just Hang in There! Tips to Stop Wasting Food. Most of us don’t set out to waste food. We do our best, but there are still times when we have to justify throwing something out.

This could be some bread that we didn’t get around to finishing, some yogurt, fruit, or even some neglected leftovers. We’re of course not thrilled to be throwing these things away. Most of us understand the various short-term and long-term consequences of wasting food, to both ourselves, and to the world at large. Concerns About Wasting Food. Garbage Disposal Care Tips. One of the great things about garbage disposals is that they’re fairly low maintenance.