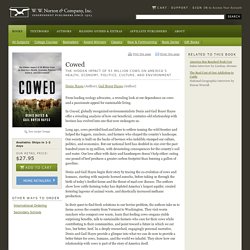 In Cowed, globally recognized environmentalists Denis and Gail Boyer Hayes offer a revealing analysis of how our beneficial, centuries-old relationship with bovines has evolved into one that now endangers us. Spring Arts: Don’t Eat That Cow! The authors of Cowed cast a critical eye on the national herd. 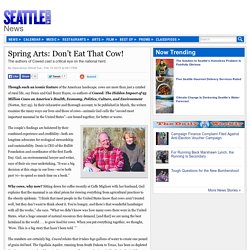 By Gwendolyn Elliott Tue., Feb 10 2015 at 06:17PM Though such an iconic feature of the American landscape, cows are more than just a symbol of rural life, say Denis and Gail Boyer Hayes, co-authors of Cowed: The Hidden Impact of 93 Million Cows on America’s Health, Economy, Politics, Culture, and Environment (Norton, $27.95). In their exhaustive and thorough account, to be published in March, the writers examine the many ways our lives and those of cows—animals Gail calls the “second most important mammal in the United States”—are bound together, for better or worse. The couple’s findings are bolstered by their combined experience and credibility—both are longtime advocates for ecological stewardship and sustainability. “Cowed”: How corporate farming harms Americans and the planet. Bullitt Foundation CEO Denis Hayes is greeted by Mayor Mike McGinn at the grand opening of the Bullitt Center on Earth Day Monday on Capitol Hill in Seattle in 2013. 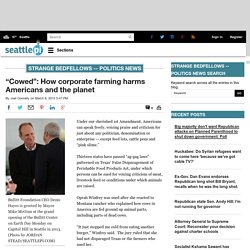 (Photo by JORDAN STEAD/SEATTLEPI.COM) Under our cherished 1st Amendment, Americans can speak freely, voicing praise and criticism for just about any politician, denomination or enterprise — except feed lots, cattle pens and “pink slime.” Thirteen states have passed “ag-gag laws” patterned on Texas’ False Disparagement of Perishable Food Products Act, under which persons can be sued for voicing criticism of meat, livestock feed or conditions under which animals are raised.

Oprah Winfrey was sued after she reacted to Montana rancher who explained how cows in America are fed ground up animal parts, including parts of dead cows. “It just stopped me cold from eating another burger,” Winfrey said. The book is about Americans’ consumption habits, the beef and dairy products they consume. Beef and dairy products can be good for us. ‘Cowed’: The end of the line for cornfed cattle? Cows Are Second Most Important Mammal In North America. Where’s the beef? Everywhere. When I was in college, I had a roommate who was assigned to me by a computer. 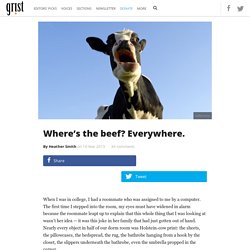 The first time I stepped into the room, my eyes must have widened in alarm because the roommate leapt up to explain that this whole thing that I was looking at wasn’t her idea — it was this joke in her family that had just gotten out of hand. Nearly every object in half of our dorm room was Holstein-cow print: the sheets, the pillowcases, the bedspread, the rug, the bathrobe hanging from a hook by the closet, the slippers underneath the bathrobe, even the umbrella propped in the corner. I nodded. This was plausible. Maybe the only bedspread she had was cow, and it was just easier to brush her teeth with that cow-pattern toothbrush. Green America, Fall 2014: Too Much Bad Beef. Conventional beef impacts our health, ruins our environment, and exacerbates the climate crisis more than any other type of meat. 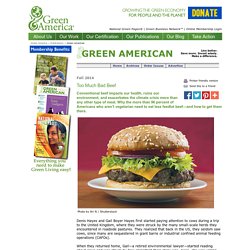 Why the more than 96 percent of Americans who aren’t vegetarian need to eat less feedlot beef—and how to get them there. Denis Hayes and Gail Boyer Hayes first started paying attention to cows during a trip to the United Kingdom, where they were struck by the many small-scale herds they encountered in roadside pastures. They realized that back in the US, they seldom saw cows, since many are sequestered in giant barns or industrial confined animal feeding operations (CAFOs). When they returned home, Gail—a retired environmental lawyer—started reading about cows and was struck by how important their story was. Soon, she was urging Denis to join in on her research project.

The result was their upcoming book Cowed (W.W. “As a source of labor and food, cows were integral to the settlement of the American frontier,” they write. Americans don’t just eat. America has reached peak cow: Why it’s time to reconsider the human-bovine partnership. 93 million: The number of cows currently living in America, competing with us for food and water resources. 5, 11 and 28: The factor by which conventional, grain-fed beef emits more greenhouse gases, and uses up more water and land, respectively, as compared to other meat sources. 71.2: Pounds of red meat consumed by the average American in 2012. 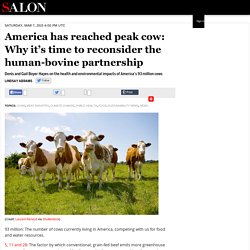 These are the kinds of the numbers that can cause an environmentalist to lose sleep at night. Eating a Burger or Driving a Car: Which Harms Planet More? 'Cowed' by Denis Hayes tackles the real cost of eating beef. America’s love affair with the burger and the shake has a cost. 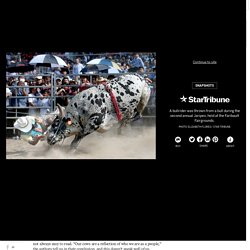 In this well-researched and far-ranging study, Denis and Gail Boyer Hayes describe in disturbing detail the practices of factory farming and the damage it does to the Earth, to the cows and to the consumers. It’s an important book, though not always easy to read. “Our cows are a reflection of who we are as a people,” the authors tell us in their conclusion, and this doesn’t speak well of us. The U.S. herd numbers 93 million, and Denis and Gail (as they refer to each other) explain why beef is destined to become a luxury item. The Page 99 Test: Denis Hayes and Gail Boyer Hayes's "Cowed" Book City: Denis Hayes on the power of Dr. Seuss. As President of the Bullitt Foundation, Denis Hayes has promoted urban ecology in Seattle, Portland and Vancouver BC for the last twenty years. 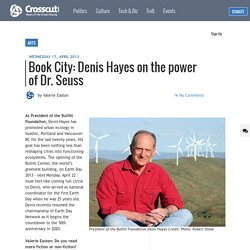 His goal has been nothing less than reshaping cities into functioning ecosystems. The opening of the Bullitt Center, the world’s greenest building, on Earth Day 2013 – next Monday, April 22 – must feel like coming full circle to Denis, who served as national coordinator for the first Earth Day when he was 25 years old. Denis recently resumed the chairmanship of Earth Day Network as it begins the countdown to the 50th anniversary in 2020. Valerie Easton: Do you read more fiction or non-fiction? Denis Hayes: I always have at least one book of each on my nightstand, a half dozen of each on my iPad. What books are open on your nightstand right now?

I picked up “Ghostman” by Roger Hobbs on a whim after reading a review that mentioned Hobbs graduated from Reed College in 2011. Favorite authors? Have you read a truly great book lately? Dr. Interview with Denis and Gail Hayes, authors of COWED. COWED, a book by Denis Hayes and Gail Boyer Hayes (pictured above), is a fond treatment of cows that carries a powerful call for change. 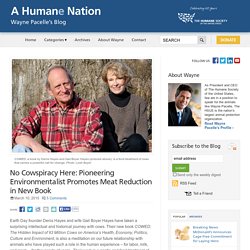