Historical Information - Cairns Australia. Captain James Cook journeyed up the North Queensland coast on his first Voyage of Discovery in 1770, aboard the HM Bark Endeavour, arriving on Trinity Sunday and naming the area Trinity Bay. 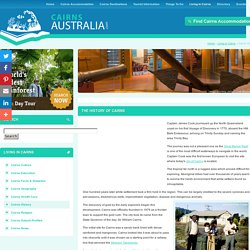 The journey was not a pleasant one as the Great Barrier Reef is one of the most difficult waterways to navigate in the world. Captain Cook was the first known European to visit the site where today's city of Cairns is located. The tropical far north is a rugged area which proved difficult for exploring. Aboriginal tribes had over thousands of years learnt to survive the harsh environment that white settlers found so inhospitable. One hundred years later white settlement took a firm hold in the region. The discovery of gold by the early explorers began this development. The initial site for Cairns was a sandy bank lined with dense rainforest and mangroves. It provided a transport route for tin and timber to shipped to southern ports. The flat coastal lands became major sugar cane plantations. Broxburn Athletic F.C. For the defunct Broxburn Athletic club see Broxburn United F.C., the club into which it was merged History[edit] In 1946, Mr. 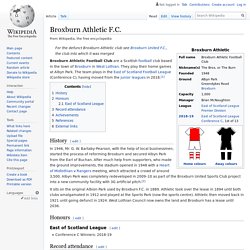 G. W. Bartaby-Pearson, with the help of local businessmen, started the process of reforming Broxburn and secured Albyn Park from the Earl of Buchan. It sits on the original Albion Park used by Broxburn F.C. in 1889. Honours[edit] East of Scotland League[edit] Conference C Winners: 2018-19 Record attendance[edit] (Albyn Park) 1951–52 11,400 v Kilsyth Rangers SJC Achievements[edit] Broxburn have reached the Scottish Junior Cup semi-final on five occasions, the last time being in 1971, when they lost by a single goal to Cambuslang. References[edit] External links[edit] Queensland's History - Queensland Australia. Queensland has had a colourful past over the centuries. 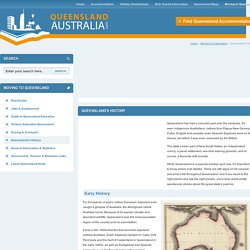 It’s seen indigenous Australians, natives from Papua New Guinea, Dutch, English and possibly even Spanish Explorers land on its shores, all before it was even colonised by the British. The state’s been part of New South Wales, an independent colony, a penal settlement, war time training grounds, and of course, a favourite with tourists. While Queensland is a popular holiday spot now, it’s important to know where it all started. There are still signs of old colonial and prison life throughout Queensland, and if you head to the right places and ask the right people, you’ll hear some pretty spectacular stories about this great state’s past too. Early History For thousands of years, before European explorers ever caught a glimpse of Australia, the Aboriginals called Australia home. It was in the 1600s that the first recorded explorers noticed Australia. However, none of these nations ever settled. Colonial History Twentieth Century. Jacobus Craandijk. Jacobus Craandijk (7 September 1834, in Amsterdam – 3 June 1912, in Haarlem) was a Dutch Mennonite teacher and minister who enjoyed using his spare time for walks while taking notes and drawing. 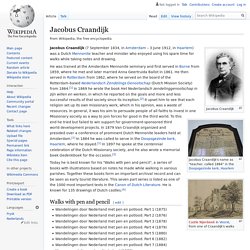 He was trained at the Amsterdam Mennonite seminary and first served in Borne from 1859, where he met and later married Anna Geertruida Ballot in 1861. He then served in Rotterdam from 1862, where he served on the board of the Rotterdam-based Nederlandsch Zendelings Genootschap (Dutch Mission Society) from 1864.[1] In 1869 he wrote the book Het Nederlandsch zendelinggenootschap in zijn willen en werken, in which he reported on the goals and more and less successful results of that society since its inception.[2] It upset him to see that each religion set up its own missionary work, which in his opinion, was a waste of resources. In general, it was his aim to persuade people of all faiths to invest in one Missionary society as a way to join forces for good in the third world. 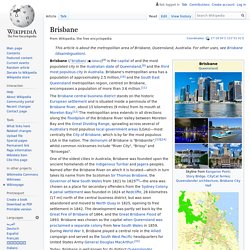 Brisbane's metropolitan area has a population of approximately 2.5 million,[10] and the South East Queensland metropolitan region, centred on Brisbane, encompasses a population of more than 3.6 million.[11] The Brisbane central business district stands on the historic European settlement and is situated inside a peninsula of the Brisbane River, about 15 kilometres (9 miles) from its mouth at Moreton Bay.[12] The metropolitan area extends in all directions along the floodplain of the Brisbane River Valley between Moreton Bay and the Great Dividing Range, sprawling across several of Australia's most populous local government areas (LGAs)—most centrally the City of Brisbane, which is by far the most populous LGA in the nation.