Scientists may have found the 'trigger' of Alzheimer's disease. A group of the Lomonosov Moscow State University scientists, together with their colleagues from the Institute of Molecular Biology, Russian Academy of Sciences and the King's College London, succeeded in sorting out the mechanism of Alzheimer's disease development and possibly distinguished its key trigger. 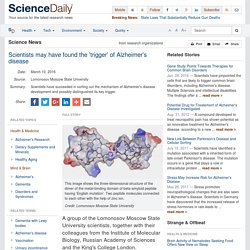 Their article was published in Scientific Reports. 'Alzheimer's disease is a widespread degenerative damage of central nervous system leading to a loss of mental ability.'Until now it was considered incurable,' tells Vladimir Polshakov, the leading researcher, MSU Faculty of Fundamental Medicine. Though now scientists managed to distinguish the mechanism 'running' the disease development, so, a chance appeared to elaborate some new chemical compounds, that may work as an efficient cure. Memory enhancement miracle? or not… I recently fielded an inquiry about a supposed memory enhancement supplement. i looked into it, and was exceptionally unimpressed with what i saw. so i’m going to blog it. the question was regarding a supplement called prevagen (apoaequorin 10 mg capsules), which claims to be “brain cell protection” with the following scientific basis: Prevagen contains a calcium-binding protein which interacts with calcium and regulates the actions that control the health of cells involved in learning, memory, focus and concentration*. 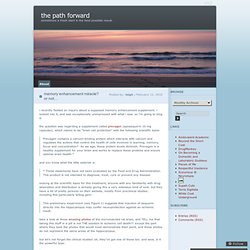 As we age, these protein levels diminish. Prevagen is a healthy supplement for your brain and works to replace these proteins and ensure optimal brain health. and you know what the little asterisk is: * These statements have not been evaluated by the Food and Drug Administration. This preliminary experiment (see Figure 1) suggests that injection of aequorin directly into the hippocampus may confer neuroprotection against an ischemic insult.

Awakening From Alzheimer's. This all-natural protein melts away the brain-clogging mineralthat triggers memory loss, dementia and Alzheimer's—and cuts brain cell death in half! 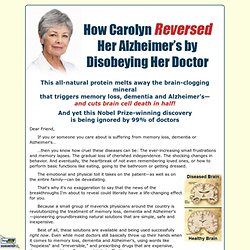 And yet this Nobel Prize-winning discoveryis being ignored by 99% of doctors Dear Friend, If you or someone you care about is suffering from memory loss, dementia or Alzheimer's… …then you know how cruel these diseases can be: The ever-increasing small frustrations and memory lapses. The gradual loss of cherished independence. The emotional and physical toll it takes on the patient—as well as on the entire family—can be devastating. Awakening from Alzheimer's. Prevagen? January 17, 2008 04:35 AM Eastern Time Are Jellyfish the Lost Link to the Fountain of Youth? 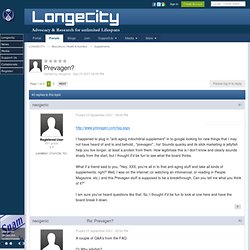 Prevagen™, a Recently Launched Product Based on Jellyfish Protein, is Making Big Waves with Health Conscious Consumers Fitness & Health IMADISON, Wis. --(BUSINESS WIRE)--For many people who conjure up an image of a jellyfish, a slippery denizen of the deep comes to mind. But since September 1st, 2007, when Prevagen, a dietary supplement designed to fight the aging process became available, many consumers now think of jellyfish as a key to a healthier life. Yet the jellyfish-to-Prevagen story didn’t happen overnight. For millions of people who dream about aging gracefully free of neurodegenerative diseases that their parents might have had, or of having more energy, better concentration, sharper, better memory retention, and sounder sleep, Quincy Bioscience of Madison, Wisconsin has been working for years to help people realize their dreams. 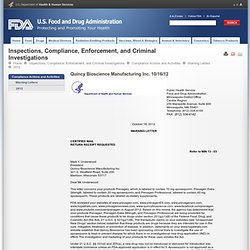 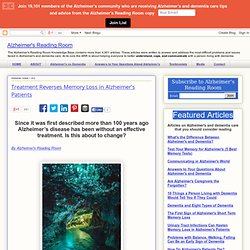 Is this about to change? By Alzheimer's Reading Room In the first, small study of a novel, personalized and comprehensive program to reverse memory loss, nine of 10 participants, displayed subjective or objective improvement in their memories beginning within 3-to-6 months after the program’s start. Of the six patients who had to discontinue working or were struggling with their jobs at the time they joined the study, all were able to return to work or continue working with improved performance. 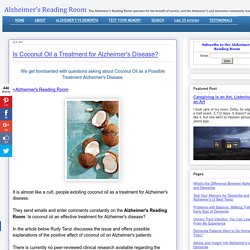 +Alzheimer's Reading Room It is almost like a cult, people extolling coconut oil as a treatment for Alzheimer's disease. Flash of Genius, Neuroscientists' Replicate Alzheimer's Disease. Tau Not Amyloid-Beta Causes Neuronal Death in Alzheimer's Patients. "This study suggests a completely new way to look at Alzheimer's that might alter the way we study the disease, screen for it and ultimately treat it. 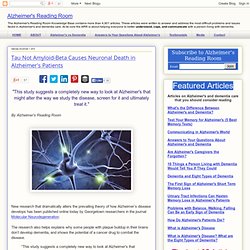 " By Alzheimer's Reading Room New research that dramatically alters the prevailing theory of how Alzheimer’s disease develops has been published online today by Georgetown researchers in the journal Molecular Neurodegeneration. The research also helps explains why some people with plaque buildup in their brains don’t develop dementia, and shows the potential of a cancer drug to combat the disease. “This study suggests a completely new way to look at Alzheimer's that might alter the way we study the disease, screen for it and ultimately treat it,” says the study’s senior investigator, Charbel E-H Moussa, MB, PhD, of Georgetown University Medical Center. Moussa co-authored the study with researchers from Capital Medical University in Beijing, China and Merck Research Laboratories, which provided funding for the study. 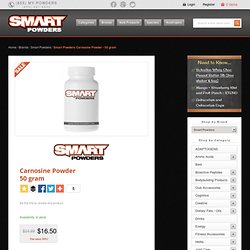 Carnosine is a small molecule composed of the amino acids, histidine and alanine. It is found in relatively high concentrations in several body tissues—most notably in skeletal muscle, heart muscle, and brain. The exact biological role of carnosine is not completely understood, but numerous animal studies have demonstrated that it possesses strong and specific antioxidant properties. Carnosine has been suggested to be the water-soluble counterpart to vitamin E in protecting cell membranes from oxidative damage. What does it DO ??

Researchers are finding that it's possible to block the increase of hydrogen ions, thus stabilizing pH levels and prolonging muscular activity. This is because carnosine possesses a pKa value of 6.83, which is very close to the body’s natural pH level of 7.0. Jarrow Formulas L-Carnosine 500, 90 Caps 500 mg: Amazon.co.uk: Health & Personal Care. As seen on 60 minutes - perispinal etanercept. Memory loss associated with Alzheimer’s reversed for first time. Patient 1 had two years of progressive memory loss. 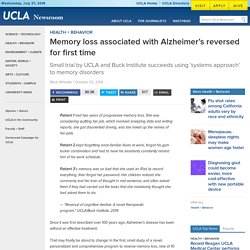 She was considering quitting her job, which involved analyzing data and writing reports, she got disoriented driving, and she mixed up the names of her pets. Patient 2 kept forgetting once-familiar faces at work, forgot his gym locker combination and had to have his assistants constantly remind him of his work schedule. Patient 3’s memory was so bad that she used an iPad to record everything, then forgot her password. Her children noticed she commonly lost her train of thought in mid-sentence, and often asked them if they had carried out the tasks that she mistakenly thought she had asked them to do. — “Reversal of cognitive decline: A novel therapeutic program,” UCLA/Buck Institute, 2014. Hope in a Time of Crisis: Improved Recovery from TBI and Stroke - Brain Health & Healing Foundation.

Xavier A. Figueroa, Ph.D. March is Brain Injury Month and to acknowledge the significance of this event, I’m writing a post that lists the many hopeful and helpful therapies that exist in the medical field for an acquired brain injury. The therapies remain unacknowledged, underfunded and uncovered by all insurance carriers. That is nothing new to brain injury survivors that are exploring for new ways to recover from their neurological injuries. Coping and coming to terms with the “new normal” of a brain injury is what is accepted by the majority of the medical field. Infrared Light Therapy Examples of LED and laser therapy devices for hair follicle growth (Left), physical therapy and pain relief (middle) and high power laser surgical system (right). When the laser was developed in the early 1960’s, there was a rapid development cycle in the different areas for application of this technology.

As time progressed it was discovered that IR and NIR lasers could induce healing without heating.