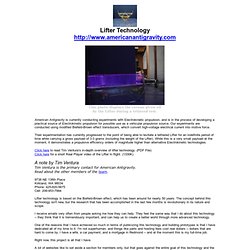 American Antigravity is currently conducting experiments with Electrokinetic propulsion, and is in the process of developing a practical source of Electrokinetic propulsion for possible use as a vehicular propulsion source. Our experiments are conducted using modified Biefeld-Brown effect transducers, which convert high-voltage electrical current into motive force. Their experimentation has currently progressed to the point of being able to levitate a tethered Lifter for an indefinite period of time while carrying a gross payload of 3.0 grams (including the weight of the Lifter). While this is a very small payload at the moment, it demonstrates a propulsive efficiency orders of magnitude higher than alternative Electrokinetic technologies.

Click here to read Tim Ventura's in-depth overview of lifter technology. A note by Tim Ventura Tim Ventura is the primary contact for American Antigravity. How Lifter Technology Works – creating a platform that mysteriously floats in the air. By Marshall Brain | January 19, 2010 There are a number of demonstrations on the Internet showing Lifter technology. 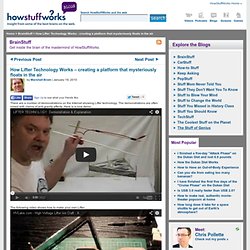 The demonstrations are often mixed with claims of anti-gravity effects. Here is a nice demo: The following video shows how to make your own Lifter: So what is going on here? The Lifters Experiments home page by Jean-Louis Naudin. Created on October 10th, 2001 - JLN Labs - Last update January 27, 2010All informations in this page are published free and are intended for private/educational purposes and not for commercial applicationsToutes les informations et schémas sont publiés gratuitement ( freeware ) et sont destinés à un usage personnel et non commercial Cliquez ici pour le Projet Lifter en Français The Lifter is an asymmetrical capacitor which uses High Voltage ( > 20KV ) to produce a thrust. 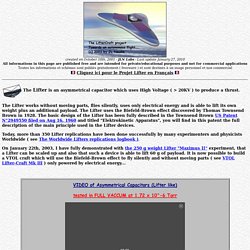 The Lifter works without moving parts, flies silently, uses only electrical energy and is able to lift its own weight plus an additional payload. The Lifter uses the Biefeld-Brown effect discovered by Thomas Townsend Brown in 1928. The basic design of the Lifter has been fully described in the Townsend Brown US Patent N°2949550 filed on Aug 16, 1960 and titled "Elektrokinetic Apparatus", you will find in this patent the full description of the main principle used in the Lifter devices. 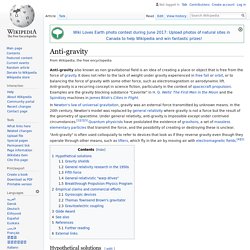 It does not refer to the lack of weight under gravity experienced in free fall or orbit, or to balancing the force of gravity with some other force, such as electromagnetism or aerodynamic lift. Anti-gravity is a recurring concept in science fiction, particularly in the context of spacecraft propulsion. Examples are the gravity blocking substance "Cavorite" in H. G. Wells' The First Men in the Moon and the Spindizzy machines in James Blish's Cities in Flight.

In Newton's law of universal gravitation, gravity was an external force transmitted by unknown means. "Anti-gravity" is often used colloquially to refer to devices that look as if they reverse gravity even though they operate through other means, such as lifters, which fly in the air by moving air with electromagnetic fields.[4][5] Hypothetical solutions[edit] Gravity shields[edit] Fifth force[edit] 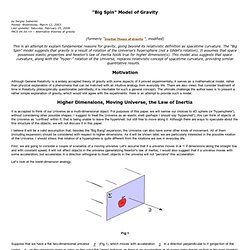 +h – Alternative theories of gravity (formerly "Inertial Theory of Gravity ", modified) This is an attempt to explain fundamental reasons for gravity, going beyond its relativistic definition as spacetime curvature. The “Big Spin” model suggests that gravity is a result of rotation of the Universe’s hypersphere (not a Gödel's rotation). It assumes that space possesses elastic properties and Newton’s law of inertia holds true for higher dimension(s). Motivation Although General Relativity is a widely accepted theory of gravity with some aspects of it proved experimentally, it serves as a mathematical model, rather than physical explanation of a phenomena that can be matched with an intuitive analogy from everyday life.

Higher Dimensions, Moving Universe, the Law of Inertia It is accepted to think of our Universe as a multi-dimensional object. Let's look at the lower-dimension analogy. . Anti-Gravity. From PESWiki The movie Back to the Future had flying skateboards in the year 2015 (not to mention what the black-budget secret ops have). 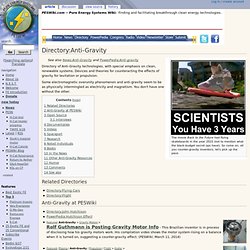 So come on, all you counter-gravity inventors, let's pick up the pace. See also News:Anti-Gravity and PowerPedia:Anti-gravity Directory of Anti-Gravity technologies, with special emphasis on clean, renewable systems. Devices and theories for counteracting the effects of gravity for levitation or propulsion. Some electromagnetic overunity phenomenon and anti-gravity seem to be as physically intermingled as electricity and magnetism. Related Directories.