I love coffee, and I love to write about it. I think drinking bad coffee is simply no acceptable. My blog is Coffee Brewing Methods and is a mix of brewing tutorials, coffee news and equipment reviews. 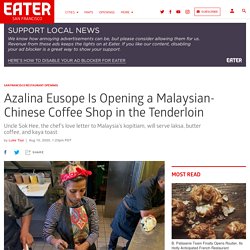 A world-altering pandemic put a damper on those plans, but construction on the 20-seat space — part of the new Aviary restaurant hub at 499 Ellis Street — continued apace. And now, Eusope tells Eater SF, the restaurant is ready to open. Named Uncle Sok Hee, the restaurant will be her version of a kopitiam, the kind of Malaysian-Chinese coffee shop that you can find all over the island of Penang, where Eusope grew up. It will launch sometime in October, with a limited lunch menu for takeout and sidewalk dining. For Eusope, the new project is deeply personal. As a Muslim, Eusope explains, her father was technically “breaking the rules” by hanging out at those coffee shops, none of which were halal. Hawaiipublicradio. Gaggia Brera Espresso Machine Review – Brew Espresso Coffee. When it comes to espresso machines, it’s fairly difficult to pick something if you don’t have any brewing experience. 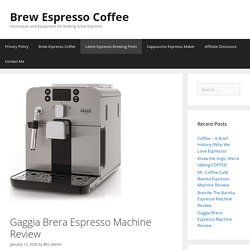 Most semi-automated espresso machines need personal adjustments, which makes it difficult if you don’t have the knowledge. This applies especially in the mornings when your brain is still half asleep and can’t process reality – let alone coffee brewing techniques. You need that espresso to wake you up – and not an annoyingly complicated “make the right pick” puzzle game. If you are still trying to figure out if a super-automatic or a semiautomatic is for you, check our article on how to choose the right espresso machine. In this respect, the Gaggia Brera was made to simplify the process, offering you high-quality espresso with just the press of a button. What beans should I use for cold brew coffee? [The best coffee beans for cold brew coffee] – That's Cold Brew Coffee.

This is a worthy question. 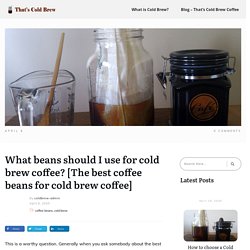 Generally when you ask somebody about the best coffee beans to use you will get the generic answer: ‘it all comes down to taste and preference’. God knows I have said this sentence too many times to count and it is essentially true – we all have different coffee tastes. I prefer more bright, acidic notes while a colleague of mine prefers darker, chocolaty notes. However, when it comes down to cold brew there are actually a few definitive factors that influence the taste of your brew and therefore there are particular beans that work best for a cold brew. 2 Coffee County schools closed for rest of week through caution of COVID-19. COFFEE COUNTY, Tenn. 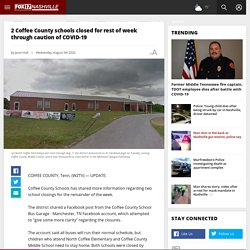 (WZTV) — UPDATE: Coffee County Schools has shared more information regarding two school closings for the remainder of the week. The district shared a Facebook post from the Coffee County School Bus Garage - Manchester, TN Facebook account, which attempted to "give some more clarity" regarding the closures. The account said all buses will run their normal schedule, but children who attend North Coffee Elementary and Coffee County Middle School need to stay home. Both schools were closed by Coffee County schools administration.

Marshfield coffee shop collects and matches school supply donations. Breville The Barista Espresso Machine Review – Brew Espresso Coffee. The daily espresso is a pleasure for many people – and for others a necessity. 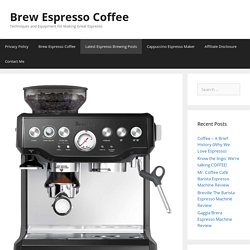 Some people drink espressos for the sheer aroma. Others drink it for the kick and to prevent the headache caused by caffeine withdrawal. Still, there’s no reason why you can’t combine necessity with pleasure. What is Nitro Cold Brew Coffee? – That's Cold Brew Coffee. Up until recently, nitro cold brew was the absolute hot trend in third wave, speciality coffee shops. 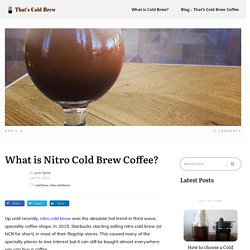 In 2015, Starbucks starting selling nitro cold brew (or NCB for short) in most of their flagship stores. Coffee prices rise in July after three months of decline. In July 2020, the International Coffee Organization (ICO) composite indicator increased by 4.7 per cent to an average of 103.66 US cents per pound, following three months of declines. 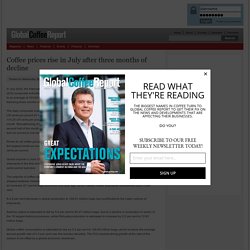 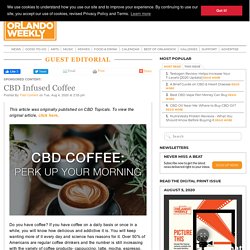 Letters should be a minimum of 150 words, refer to content that has appeared on Orlando Weekly, and must include the writer's full name, address, and phone number for verification purposes. No attachments will be considered. Writers of letters selected for publication will be notified via email.

Letters may be edited and shortened for space. Email us at feedback@orlandoweekly.com. Orlando Weekly works for you, and your support is essential. Our small but mighty local team works tirelessly to bring you high-quality, uncensored news and cultural coverage of Central Florida. Unlike many newspapers, ours is free – and we'd like to keep it that way, because we believe, now more than ever, everyone deserves access to accurate, independent coverage of their community.

Whether it's a one-time acknowledgement of this article or an ongoing pledge, your support helps keep Orlando’s true free press free. Mr. Coffee Café Barista Espresso Machine Review – Brew Espresso Coffee. We all like affordable stuff – but unfortunately, the cheap stuff also come at a great price: their quality. 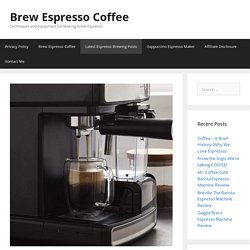 At least, that’s what happens 80% of the time. There are some cases when you can actually get high quality for a low price. Granted, it’s likely that with low-budget espresso makers, you won’t get the quality brought by the high-end ones. Still, some can actually bring you close enough to the result so that you won’t even need a professional espresso maker. Cold Brew Health Benefits – That's Cold Brew Coffee. As we are aware, cold brew coffee has become extremely popular in recent years. 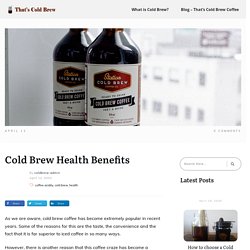 Some of the reasons for this are the taste, the convenience and the fact that it is far superior to iced coffee in so many ways. However, there is another reason that this coffee craze has become a phenomenon. Cold Brew has a number of health benefits associated with it that make it all the more appealing. A lot of these are coffee benefits in general but I thought this would be a good opportunity to talk about the amazing health benefits of the delicious liquid known as coffee, and then to highlight some of the ways in which cold brew is even more superior for health.

So without further ado, let’s get to it. Woman wants new coffee shop to be 'a hub of activity' - Albert Lea Tribune. Business opening in downtown Lake Mills LAKE MILLS — Kelly Gau said Lake Mills has needed a coffee shop for a while. So she decided to do something about it. Swallow Coffeehouse, 225 W. Main St. in downtown Lake Mills, will officially open Saturday after having a soft opening this week. Bloody brawl breaks out after woman throws coffee in man’s face for not wearing mask.

A brawl broke out between a bystander and a passerby in Los Angeles County Friday after the latter's girlfriend threw hot coffee in a stranger's face for not wearing a coronavirus mask. The fight, captured on a bodycam, occurred in Manhattan Beach after the couple verbally confronted Matthew Roy and his friend James Hernandez -- whose bodycam filmed the incident, Fox 11 reported. The two men were eating burritos outside without masks on and a woman can be heard saying, “Y’all need to be wearing masks.

" “No, we don’t,” Hernandez replied. “We’re locals here, but we're on the other side of the fence, we don’t believe in this stuff.” Know the lingo: We’re talking COFFEE! – Brew Espresso Coffee. “What would you like?” These words strike terror in the heart of many people who want to appear chic when ordering a latte. Not sure how to order a coffee drink? Learn the lingo and talk like a native! Soon, you’ll be able to step right up and rattle off your order like the most seasoned espresso snob. 5 Non Alcoholic Cold Brew Coffee Cocktails – That's Cold Brew Coffee. One of the many wonders of cold brew is how versatile it is.

An example of this is how it serves as a perfect base for other drinks. As I have talked about in some of my other articles here, cold brewing coffee extracts very little acid from the bean. This makes it the ideal base for many cold drinks, but especially acidic or sugary ones. Coffee – A Brief History (Why We Love Espresso) – Brew Espresso Coffee. Nowadays the whole world wakes up with the scent of coffee, the most popular drink after water and wine. And for the Italians, nothing like the espresso cup brings home to mind. How many times abroad have we tried desperately a decent espresso, deceiving ourselves so many times in front of the machines similar to those of our bars? The history of coffee is fascinating, and has a lot of exotic even though it is now so familiar. The name derives from the Turkish pronunciation qahvé, from the Arabic qahwah, which first meant wine (or perhaps an exciting drink), and then towards the end of the XIV century it was extended from Yemen to the drink made with coffee beans.

Kava has remained the name of coffee even in European languages, such as Czech, or Croatian. The coffee plant draws its origin from Africa, from the Ethiopian region of Caffa. How to choose a Cold Brew Coffee Maker and Which Cold Brew Coffee Maker is the Best? – That's Cold Brew Coffee. What Is an Americano Coffee and How to Make It at Home. What to Do with Leftover Coffee. How Long Is Brewed Coffee Good for - Coffee Freshness. Best Steam Based Espresso Machines - Coffee Brewing Methods. Coffee Brewing Methods - Learn To Make Coffee at Home.

Food new england coffee backgrounds wallpapers. Ascaso Dream PID Espresso Machine Pulling a Shot e1561850086686. Best Cheap PID Espresso Machine - Coffee Brewing Methods. Technically, the machine doesn’t have two boilers, it has one boiler and one thermoblock. But for home use, where you don’t typically make too much coffee, this is the better solution. If you don’t make lattes and cappuccinos you can turn off the steamer unit, separately from the coffee boiler, and save energy. The thermoblock heats up faster than a boiler, so you don’t have to wait too long. The stainless steel - plastic free construction will appeal the eco-friendly conscious baristas, and it gives the machine a fabulous look. Here are some more details about the Quick Mill Silvano Evo. 58mm portafilter with single and double insert baskets, and a blank for backflushingPump pressure gaugeCup warming trayElectronic water level controlLarge stainless steel drip tray - easy to remove The machine comes with a single set of non pressurized baskets, since the unit is aiming the experienced home baristas.

The pressure gauge is very useful to read your shot.