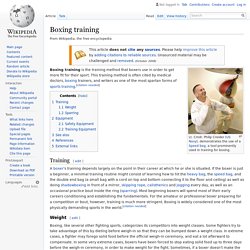 Cmdr. Philip Creider (US Navy), demonstrates the use of a Speed bag, a tool prominently used in training for boxing. Boxing training is the training method that boxers use in order to get more fit for their sport. This training method is often cited by medical doctors, boxing trainers, and writers as one of the most spartan forms of sports training. The Ultimate Boxing Workout. What is it about Rocky training montages that are so empowering? 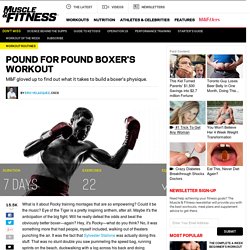 Could it be the music? Eye of the Tiger is a pretty inspiring anthem, after all. Maybe it's the anticipation of the big fight. Will he really defeat the odds and beat the obviously better boxer—again? Hey, it's Rocky—what do you think? Even more impressive was the end product. Two-time Mr. But it wasn't just rep after monotonous rep in the weight room that built Rocky's title-winning physique.

In the real world, boxers are some of the world's leanest, most well-trained athletes. Gyms that are built on the idea of boxing-for-fitness are popping up left and right across the country, most advertising the promise of helping you burn up to 1,000 calories in an hour. By the end of my time with Roach and company, I may not have been ready to swap blows with a pro, but I was faster, leaner and stronger than I had been since college. Welcome to the Wild Card A full-size ring occupies most of the space in the room. Step-by-Step Boxing Training Program.

Preparing to step into the boxing ring requires a high level of muscular strength, stamina, agility and endurance. 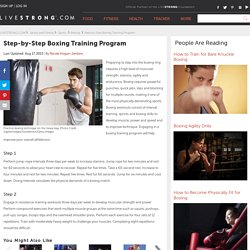 Boxer Anthony Ogogo fitness tips. WINNER: Anthony has won all of his fights since he became a professional boxer [GETTY ] British Olympian Anthony Ogogo punched his way to another win in Las Vegas at the beginning of the month as he stopped Jonuel Tapia inside three rounds. 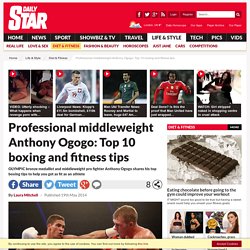 "I want to become world champion, I want to become one of the best middleweights we have ever had in this country. " "Anyone who’s boxed will tell you what an incredibly tough sport it is. "But I love everything about boxing. " Keep moving. 7 Essential Boxing Fitness Training Tips. Boxing's Most Insane Workout Regimens. The prizefighters of the 18th century fought in a kind of style that would more closely resemble MMA, but with no gentlemanly opportunity to tap out to a joint lock or choke, but instead a non-stop dirty-boxing and throw-heavy war to unconsciousness. 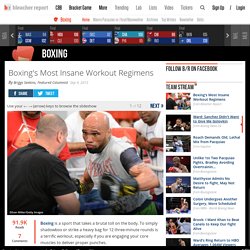 Still, the old-time fighters were most certainly sportsmen and professional athletes, and their training was taken as seriously then as it is now. In The Heavyweight Championship, Nat Fleischer quotes an article from Boxiana, the Georgian era's equivalent of The Ring: The skilled trainer attends to the state of the bowels, of the lungs, and the skin; and uses such means as will reduce the fat, at the same time, invigorate the muscular fibres (sic)...he is sweated by walking under a load of clothes, and by lying between feather-beds.

His limbs are roughly rubbed. his diet is beef or mutton: his drink strong ale... Under the rules of the day, which required a fight to the knockout, surrender or collapse, all that road work made sense. Boxing Training Ideas. Boxing itself and training for boxing can get you in great shape -- boxers are among the fittest of all athletes. 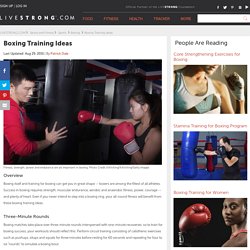 Success in boxing requires strength, muscular endurance, aerobic and anaerobic fitness, power, courage -- and plenty of heart. Even if you never intend to step into a boxing ring, your all-round fitness will benefit from these boxing training ideas.