How to Generate CSR for Adobe Code Signing Certificate. Once the above steps are completed, you’ll get an order number and you’ll be requested to validate your code signing certificate before its issuance. 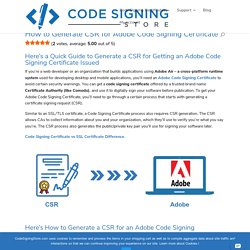 You’ll need to follow the Certificate Authority’s validation process guidelines—they’ll ask you for information regarding you as well as your organization to prove that you’re a legal entity (for instance, registration details of your organization). The entire process of getting an Adobe code signing certificate issued will take around 1 to 5 business days, depending upon how fast you provide all the required information.

Lastly, once the information is verified and the validation step gets completed, the CA will issue and send you the requested code signing certificate to your registered email address. ❓ FAQ of Code Signing: Frequently asked Question of software signing. Yes, utilities differ depending upon the platforms used for signing files or codes. 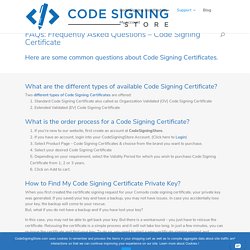 Windows: In Windows, Microsoft signtool is one of the utilities used for situations such as signing different drivers & executable files. It comes in the bundle as part of Windows SDK, where it works with both standard code signing certificates as well as EV code signing certificates. Java: When it comes to signing codes in Java, Jarsigner is used, which comes bundled with the Java JDK as it provides support for .pfx files, provided you are aware of the alias. How to Sign Code With a Microsoft Authenticode Signing Certificate? Learn How to Sign and Timestamp a Java JAR File - CodeSigningStore. Step:1 After locating the certificate in your browser, export it with the private key while including all the certificates in the chain and exporting extended properties. 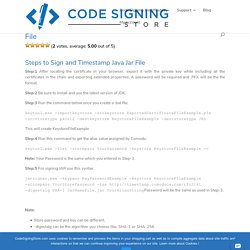 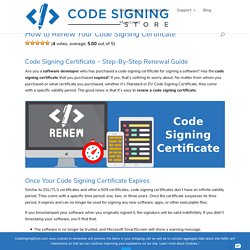 They come with a specific time period: one, two, or three years. Once the certificate surpasses its time period, it expires and can no longer be used for signing any new software, apps, or other executable files. If you timestamped your software when you originally signed it, the signature will be valid indefinitely. If you didn’t timestamp your software, you’ll find that: The software is no longer be trusted, and Microsoft SmartScreen will show a warning message.Instead of your name, your software will display an unknown publisher.You may see a loss in revenue if customers stop installing due to warning messagesIt may take a few days for the issuance of another certificate, so you won’t be capable of signing and publishing your software for around a week. How to Generate CSR for Windows Code Signing Certificate?

Are you a software developer or an organization that develops software, apps, or drivers for Windows? 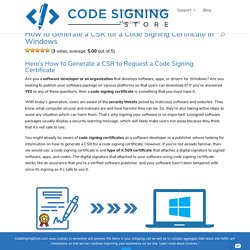 Are you looking to publish your software package on various platforms so that users can download it? If you’ve answered YES to any of these questions, then a code signing certificate is something that you must have it. With today’s generation, users are aware of the security threats posed by malicious software and websites. They know what computer viruses and malware are and how harmful they can be. So, they’re also taking active steps to avoid any situation which can harm them. How to Fix Unable to Build a Valid Certificate Chain for the Signer Error? Dual Sign a File with SHA-256 & SHA1 Code Signing Certificates. How to Collect Your Comodo EV Code Signing Certificate. How to Boost Software/Application Downloads? - CodeSigningStore. How EV Code Signing Certificate Works? - Explained by CodeSigningStore.

Hashing – Once the software is created successfully, you have to hash it. 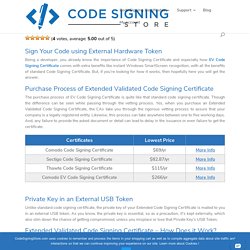 This hashing process assures users that your software is trustworthy, and it has not tampered. For instance, while downloading the software, any failure to produce the right hash value signals the browsers that it has been compromised. Signing – Once the hashing is done, the most important one, the signing process is the next step. Here, you will make the use of that provided external USB token, for using your private key to digitally sign and timestamp your software. It lets the browser know who’s the publisher of the software and whether it’s trustworthy or not. Download – Once the above steps, i.e., hashing, signing, and timestamping of your software is complete, it’s ready to post it for download. 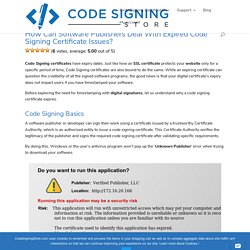 Take an example of a rubber stamp, which stamps the current date and time on a document. Similarly, in digital terms, a code signing timestamp records and preserves the digital signature of your software code, which can be used to determine the validity of a downloaded certificate even if it expires in the future. It is standard for a user’s computer to check your digital signature before downloading or installing a piece of software. This process usually happens by checking the expiry date against the current date in your system. But if you timestamped your code, it means your digital signature is frozen, and the user can download and install the software at any time within the software’s lifespan without seeing the ‘Author Unknown‘ warning message. Guide on Code Signing Certificate for Visual Studio - CodeSigningStore. Microsoft Visual Studio, an integrated development environment (IDE) from Microsoft, is used for developing software packages, web applications, mobile applications, and more. 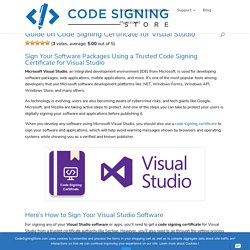 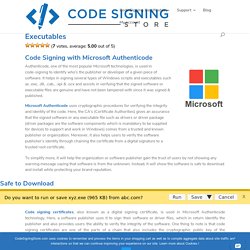 It helps in signing several types of Windows scripts and executables such as .exe, .dll, .cab., .xpi & .ocx and assists in verifying that the signed software or executable files are genuine and have not been tampered with since it was signed & published. Microsoft Authenticode uses cryptographic procedures for verifying the integrity and identity of the code. Here, the CA’s (Certificate Authorities) gives an assurance that the signed software or any executable file such as drivers or driver package (driver packages are the software components which is mandatory to be supplied for devices to support and work in Windows) comes from a trusted and known publisher or organization.

Code Signing Identity and Provisioning Profiles – What Are the Differences? As per Apple, it’s their security mechanism, which is used for authenticating identity. 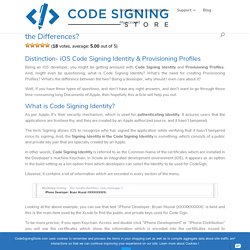 It assures users that the applications are trustworthy, and they are created by an Apple authorized source, and it hasn’t tampered. The term Signing allows iOS to recognize who has signed the application while verifying that it hasn’t tampered since its signing. And, the Signing Identity in the Code Signing Identity is something, which consists of a public and private key pair that are specially created by an Apple. In other words, Code Signing Identity is referred to as the Common Name of the certificates which are installed in the Developer’s machine Keychain. In Xcode an integrated development environment (IDE), it appears as an option in the build setting as a list option from which developers can select the Identity to be used for CodeSign. Code Signing Helps Get Rid of Hidden Cybersecurity Threats.

A code Signing certificate provides a method of putting a digital signature on software or any executable file so its authenticity and integrity can be verified at the time of installation or execution. You can say it’s like a wax seal which guarantees to its recipient who the author is and that it has not been opened or tampered with since it was signed. To put it another way, a certificate authority issues a validation to show that a software developer or a publisher’s code is genuine, that it’s theirs – if the client trusts that organization, they can also trust the code.

Understandably, many people hesitate to download or install any app that shows warning messages, which could be caused for a variety of reasons (such as the software company or developer is new and not popular). Also, day-to-day online threats are making browsers and operating systems demand to confirm the identity of the organization/developer that publishes software. Due to such scenarios, code signing certificates are a valuable part of the software development cycle, as they help to make software and other executable files trustworthy to end-users. Best Practices of Code Signing Time Stamping: What Is It? Why It Matters? Alert! Firefox 69 Removes HTML Element Support - CodeSigningStore. Adobe Code Signing Certificates only at $69 - CodeSigningstore. 6 Tips for Software Developers to Enhance Software Security - CodeSigningStore.