Ludzinc: Cutting out the Middle Man. Home Alarm Monitoring I have a home alarm system, and it's reliable and the monitoring company provides a good service. 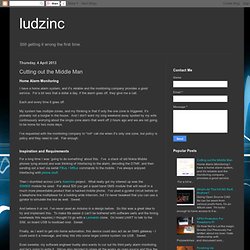 For a bit less that a dollar a day, if the alarm goes off, they give me a call. Each and every time it goes off. My system has multiple zones, and my thinking is that if only the one zone is triggered, it's probably not a burglar in the house. And I don't want my long weekend away spoiled by my wife continuously worrying about the single zone alarm that went off 2 hours ago and we are not going to be home for two more days. I've requested with the monitoring company to *not* call me when it's only one zone, but policy is policy and they need to call. Inspiration and Requirements. Lior's projects. AZIZ! Light! ← Tangent Audio. In an earlier post back at the beginning of this month, I described the beginnings of my DIY microscope illuminator project, dubbed Project AZIZ. 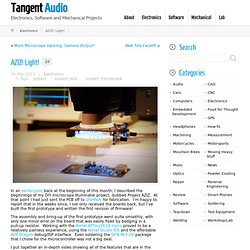 At that point I had just sent the PCB off to OSHPark for fabrication. I’m happy to report that in the weeks since, I not only received the boards back, but I’ve built the first prototype and written the first revision of firmware! The assembly and bring-up of the first prototype went quite smoothly, with only one minor error on the board that was easily fixed by bodging in a pull-up resistor. 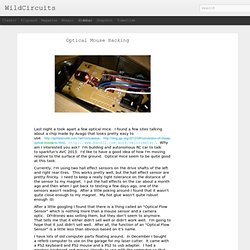 This works pretty well, but the hall effect sensor are pretty finicky. I need to keep a really tight tolerance on the distance of the sensor to my magnet. I put the hall effects on the car about a month ago and then when I got back to testing a few days ago, one of the sensors wasn't reading. » Dropping Dropbox + Hardware Hacking - dom's blog. Recently, I purchased some very cheap mobile routers for a project idea. 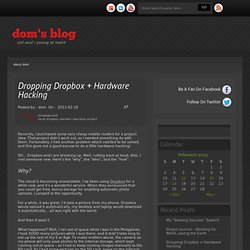 That project didn’t work out, so I needed something do with them. Fortunately, I had another problem which needed to be solved, and this gave me a good excuse to do a little hardware hacking! SO… Dropbox and I are breaking up. Well, cutting back at least. Also, I met someone new. iPhone FPV - RC Tutor. TP-Link TL-WR703N. Clones Known clones of this device: Mercury MW151RM and the FAST FW171-3G. 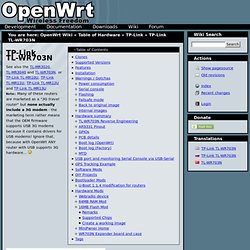 Supported Versions Unlike many newer TP-Link devices, there appears to be no hardware differences between the version for the Chinese market and the version for the international market. It was the first device that utilized the AR9331 chipset to be ported to OpenWrt. OctoWS2811 LED Library, Driving Hundreds to Thousands of WS2811 LEDs with Teensy 3.0. OctoWS2811 is a high performance WS2811 & WS2812 & WS2812B LED library, written by Paul Stoffregen, featuring simultaneous update to 8 LED strips using efficient DMA-based data transfer (technical details below). 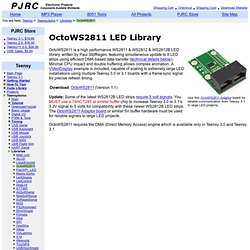 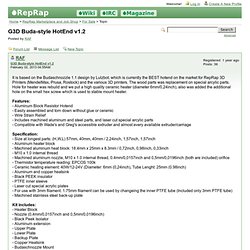 The wood parts was replacement on special arcylic parts. Hole for heater was rebuild and we put a high quality ceramic heater (diameter 6mm/0,24inch), also was added the additional hole on the small hex screw which is used to stable mount heater. Company. Open for Business. 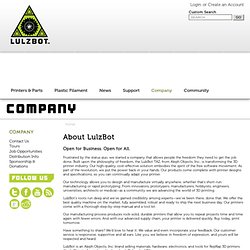 Open for All. Frustrated by the status quo, we started a company that allows people the freedom they need to get the job done. Built upon the philosophy of freedom, the LulzBot TAZ, from Aleph Objects, Inc., is transforming the 3D printer industry. Our high-quality, cost-effective solution embodies the spirit of the free software movement. As part of the revolution, we put the power back in your hands. Our technology allows you to design and manufacture virtually anywhere, whether that’s short-run manufacturing or rapid prototyping. LulzBot's roots run deep and we’ve gained credibility among experts—we’ve been there, done that. Re:load, the simple, robust, affordable dummy load.

We recognize our top users by making them a Tindarian. 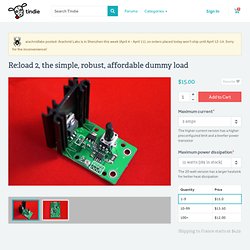 Tindarians have access to secret & unreleased features. Their product listings are automatically approved, and do not have to wait for our approval process. How does one become a Tindarian? We look for the most active & best members of the Tindie community, and invite them to join. There isn't a selection process or form to fill out. Introducing re:load - Arachnid Labs. A while ago I found myself in need of a dummy load for testing a power supply, and was surprised to find that there weren’t any good kits around for this. 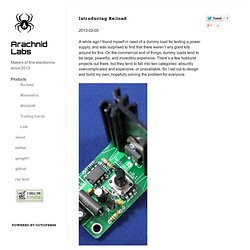 On the commercial end of things, dummy loads tend to be large, powerful, and incredibly expensive. There’s a few hobbyist projects out there, but they tend to fall into two categories: absurdly overcomplicated and expensive, or unavailable. So I set out to design and build my own, hopefully solving the problem for everyone. Three classic fixes for SMD PCB mishaps. The Factory Floor, Part 1 of 4:The Quotation (or, How to Make a BOM) This month, I will be teaching a few MIT Media Lab graduate students and doing a bit of a “geek tour” of Shenzhen – we will visit several factories and live among the electronic markets to facilitate new directions and expand horizons in the students’ hardware-oriented research projects.

As part of the course, they will learn how to scale up their research utilizing the China manufacturing ecosystem. These lessons may also be useful for Makers looking to bootstrap a product in moderate volumes (hundreds to thousands of units). I will share some tips and insights from the course in four posts over the next month covering: Getting a quotation: documentation standards (how to make a BOM) Process optimization: design for manufacturing and test jigs Industrial design for startups: guerrilla engineering on a shoestring budget How to pick a factory: building and maintaining partnerships Part 1 of 4: The Quotation (or, How to Make a BOM) Nsolecowboys: Swann Song - DVR Insecurity. "Swan song" is a metaphorical phrase for a final gesture, effort, or performance given just before death or retirement.

This post serves as the "swan song" for a whole slew of DVR security systems. With that being said, I will refer to the lyrical master MC Hammer, lets turn this mutha' out. I recently had a chance to get my hands on a 4 channel DVR system system sold under a handful of company banners (4/8/16 channels) - Swann, Lorex, Night Owl, Zmodo, URMET, kguard security, etc.

A few device model numbers are - DVR04B, DVR08B, DVR-16CIF, DVR16B After firing up the device and putting it on the network I noticed that it was running a telnet server, unfortunately the device does not appear to come configured with an easy/weak login :(. Controlling a ton of servos – TLC5940. This is something we have been asked a lot about. How do I control a ton of Servo motors with my arduino? Well… using the TLC5940 is one way. And this nice break outboard from sparkfun makes connecting a ton of servos easy. The output pins on the board are all setup and spaced to allow you to just solder some male headers to it and plugin some servo cables. The Signal Path » Tutorial and Experiments on Energy Harvesting ICs. In this episode Shahriar investigates some state-of-the-art energy harvesting ICs from Linear Technology. The LTC3105 is a highly efficient 400mA Step-Up DC/DC Converter with Maximum Power Point Control and 250mV Start-Up. After exploring the IC’s internal block diagram, the evaluation board for this energy harvesting chip is presented.