Blind Pig is Dublin's best kept secret! A 1920's speakeasy style venue by award winning bartender,Paul Lambert. Named after the police who turned a blind eye to the liquor rooms of the 1920s prohibition era, The Blind Pig launched as a pop-up Speakeasy bar that featured montly, in secret, at a well-known Dublin venue. Since then, The Blind Pig has developed an affectionate fanbase in Ireland and abroad. The Blind Pig is now in permanent residence and will tantalize the taste buds of cocktail lovers every weekend, Thursday to Sunday, from 6pm to Midnight with table service till 11.30pm. phone: 353 85 874 7901 e-mail: reservations@ theblindpig.ie 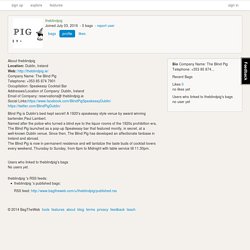