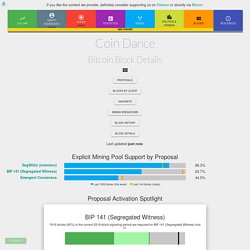 Explicit Mining Pool Support by Proposal Last 1000 blocks (this week) Last 144 blocks (today) 10+ Monitoring Websites That Help Track the Bitcoin Network. The Bitcoin universe is vast, and there’s a lot going on with the network under the hood. 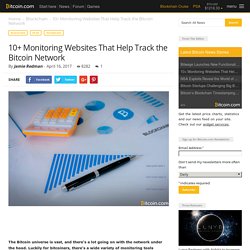 Luckily for bitcoiners, there’s a wide variety of monitoring tools available online to capture the statistics of the Bitcoin network’s past and present data. Some cryptocurrency proponents even try to use monitoring website statistics to help predict the future. Also read: An Introduction to Bitcoin Trading and Technical Charts Monitoring the Bitcoin Network Today we’re going to discuss the many sites across the web that offer Bitcoin network statistical data.

Crypto-Currency Market Capitalizations. Index - BitShares. Counterparty. How blockchain is transforming business models. The traditional business model is under attack… as well it should be. 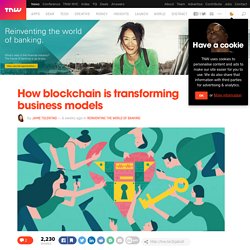 In this era of disruption, it’s absolutely necessary to redefine business models and archetypes as a whole. This post dives into the benefits of blockchain, its impact on the financial system, and how some companies are experimenting. Traditional financial services companies, and banks in particular, are behind the curve in terms of technology. An accenture report claims that most big banks have systems as old as the 1970s or even 1960s, which mean that newer IT systems are just patched on top of the core to deliver online and mobile banking capabilities. This means that most of the budget is used for maintenance rather than for innovation as their aging systems are creaking.

Taking the adoption of mobile and online banking as an example, most companies wait until a technology reaches a certain level of maturity before investing into it. Q&A: What’s next for blockchain in 2016? Nxt - The Blockchain Application Platform. Ethereum - Wikipedia. Ethereum was proposed in late 2013 by Vitalik Buterin, a cryptocurrency researcher and programmer. 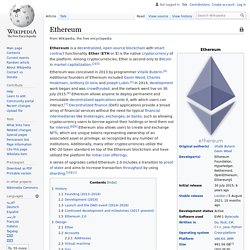 Development was funded by an online crowdsale during July–August 2014.[3] The system went live on 30 July 2015. History[edit] Origin[edit] Ethereum was initially described in a white paper by Vitalik Buterin,[4] a programmer involved with Bitcoin, in late 2013 with a goal of building decentralized applications.[5][6] Buterin had argued that Bitcoin needed a scripting language for application development. Failing to gain agreement, he proposed development of a new platform with a more general scripting language.[7]:88 Launch[edit]

Ethereum Project. Blockchain: the answer to life, the universe and everything? Have you heard the good news? 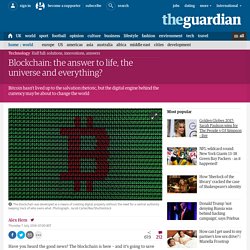 The blockchain is here – and it’s going to save everything. If you aren’t tied to the tech community, you might not have picked up on this salvation rhetoric. But you probably have heard of bitcoin, which burst into the public consciousness before imploding dramatically in 2014. But now, bitcoin is starting to look less important than the engine that drives it – the blockchain. It was created to solve a problem that had been puzzling digital activists for decades: how to create digital property without a central authority keeping track of who owns what. The answer to that question, first proposed by bitcoin’s pseudonymous creator, Satoshi Nakamoto, was to create a decentralised digital ledger, keeping track of every transaction made, and with its accuracy guaranteed through the combined honesty of the entire network. And so the technology world has fallen over itself to find out what that invention could be. 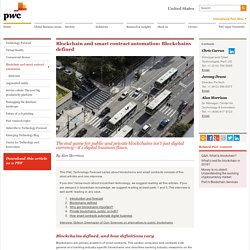 By Alan Morrison Blockchains are primary enablers of smart contracts. This section compares and contrasts both general and banking-industry-specific blockchains and describes banking industry viewpoints on the issue. What is Blockchain Technology? A Step-by-Step Guide For Beginners. Is blockchain technology the new internet? 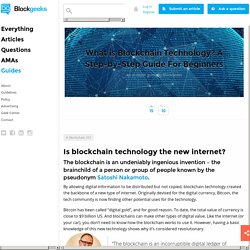 The blockchain is an undeniably ingenious invention – the brainchild of a person or group of people known by the pseudonym Satoshi Nakamoto. By allowing digital information to be distributed but not copied, blockchain technology created the backbone of a new type of internet. Originally devised for the digital currency, Bitcoin, the tech community is now finding other potential uses for the technology. Bitcoin has been called “digital gold”, and for good reason. To date, the total value of currency is close to $9 billion US. What is Blockchain Technology? A Step-by-Step Guide For Beginners. The Bitcoin and Blockchain Technology Explained. IBM Blockchain - What is Blockchain ? Blockchain Definition. 51% attack refers to an attack on a blockchain – usually bitcoin's, for which such an attack is still hypothetical – by a group of miners controlling more than 50% of the network's mining hashrate, or computing power. 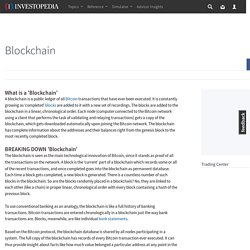 The attackers would be able to prevent new transactions from gaining confirmations, allowing them to halt payments between some or all users. They would also be able to reverse transactions that were completed while they were in control of the network, meaning they could double-spend coins. They would almost certainly not be able to create a create new coins or alter old blocks, so a 51% attack would probably not destroy bitcoin or another blockchain-based currency outright, even if it proved highly damaging. BREAKING DOWN '51% Attack' Bitcoin and other cryptocurrencies are based on blockchains, otherwise referred to as distributed ledgers. 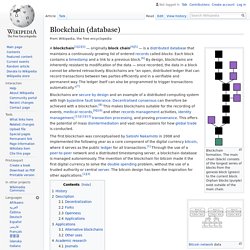 The main chain (black) consists of the longest series of blocks from the genesis block (green) to the current block. Orphan blocks (purple) exist outside of the main chain. Bitcoin transactions (January 2009 – September 2015) If two groups of users disagree about a proposed change to a public (permissionless) blockchain protocol or algorithms, the two groups are free to each run their own versions of the blockchain software, which creates two descendant blockchains with their own separate histories from that point forward.