Girls' Education Unlocks Future Potential in Pakistan's Balochistan Province. Voices from the Field Among them is that of 12-year-old Zarghony. 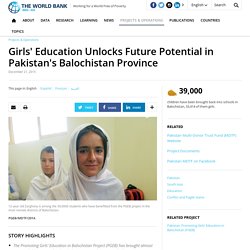 She is the youngest in a family of six and a student of grade five in a girls’ school in Malezai village, in the Pishin District of Balochistan. Through PGEB, three rooms, a boundary wall and water and sanitation facilities were provided to this shelter-less school in this remote village. The school has eighty students. Malala: ‘A full secondary education must become the ordinary expectation of every girl in the world’ Celebrated campaigner Malala Yousafzai and Jim Yong Kim, president of the World Bank Group, call for every child to have access to a full education You may be wondering what an 18-year-old student and the president of the world’s largest development agency have in common. 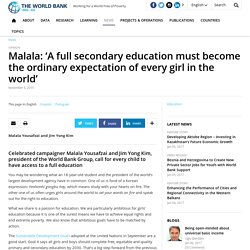 One of us is fond of a Korean expression: Yeolsimhi gongbu hay, which means study with your hearts on fire. The other one of us often urges girls around the world to set your words on fire and speak out for the right to education. What we share is a passion for education. We are particularly ambitious for girls’ education because it is one of the surest means we have to achieve equal rights and end extreme poverty. 98450 REVISED PUBLIC WB EGP Reaching Girls 040816 final6 web. Millions of girls being denied right to education, says report. ISLAMABAD: Almost 16 million girls between the ages of six and 11 will never get the chance to enrol in primary school compared to about 8m boys if current trends continue, according to a new report of the Unesco Institute for Statistics (UIS). 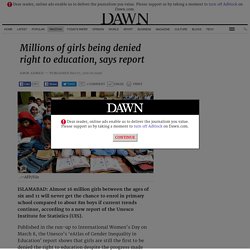 Published in the run-up to International Women’s Day on March 8, the Unesco’s ‘eAtlas of Gender Inequality in Education’ report shows that girls are still the first to be denied the right to education despite the progress made over the past 20 years. Gender disparities remain highest in Arab states, sub-Saharan Africa and South and West Asia. Women, girls and Malala: Research on gender and education in Pakistan, and beyond - Journalist's Resource Journalist's Resource.

8 Ways Malala Has Made the World Better for Women. Standing up for girls’ education on Malala Day - Equal Times. Anyone who follows current affairs or is interested in the state of education will have heard of a teenage girl from Pakistan called Malala Yousafzai. 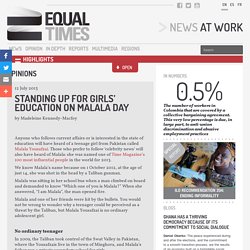 Those who prefer to follow ‘celebrity news’ will also have heard of Malala: she was named one of Time Magazine’s 100 most influential people in the world for 2013. We know Malala’s name because on 1 October 2012, at the age of just 14, she was shot in the head by a Taliban gunman. Malala was sitting in her school bus when a man climbed on board and demanded to know “Which one of you is Malala?” Malala Yousafzai: Why I Fight for Education. When Malala Yousafzai was born, the people in her Pakistani village pitied her parents—she wasn’t a boy. 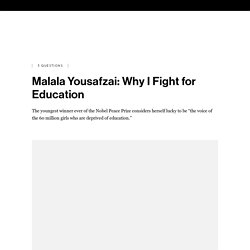 Now 18, Malala commands attention as the youngest ever Nobel Peace Prize winner. During her journey to the world stage, she took on the Taliban as an 11-year-old blogger, survived an assassination attempt, and co-founded the Malala Fund to support education around the world. He Named Me Malala, a film about her life, airs starting February 29 on the National Geographic Channel.

What would your life be like right now if you were living in Pakistan without an education? I would have two or three children. Malala Yousafzai’s Fight for Education. In recent years, no one has given more of a voice to Girls Education than Malala Yousafzai. 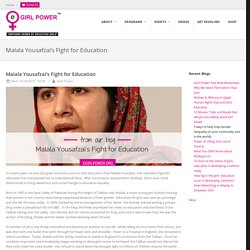 Her relentless fight for education has transported her to international fame. After surviving an assassination attempt, she is even more determined to bring awareness and social change to education equality. Born in 1997 in the Swat Valley of Pakistan during the height of Taliban rule, Malala, a smart young girl, started noticing that women in her country were being suppressed because of their gender. Education for girls was seen as a privilege and she felt this was unfair. Malala Yousafzai - Biography - Women's Rights Activist, Children's Activist. As a young girl, Malala Yousafzai defied the Taliban in Pakistan and demanded that girls be allowed to receive an education. 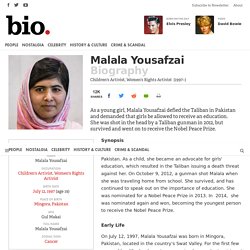 She was shot in the head by a Taliban gunman in 2012, but survived and went on to receive the Nobel Peace Prize. Synopsis Malala Yousafzai was born on July 12, 1997, in Mingora, Pakistan. As a child, she became an advocate for girls' education, which resulted in the Taliban issuing a death threat against her. Malala: Symbolizing the right of girls to education. In her famous blog about life under Taliban rule, Malala reacts to the destruction of schools, and especially girls’ schools: “Five more schools have been destroyed, one of them was near my house. 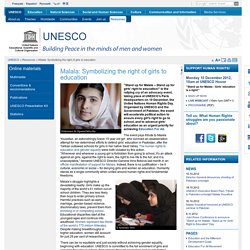 I am quite surprised, because these schools were closed so why did they also need to be destroyed?” As UNESCO’s 2011 Global Monitoring Report reveals, children and schools today are on the front line of armed conflicts, with classrooms, teachers and pupils seen as legitimate targets. The consequence, as one UN report puts it, is “a growing fear among children to attend school, among teachers to give classes, and among parents to send their children to school”. Saluting Malala’s courage, Ms Bokova offered this sobering reminder of the global situation: “This April, in Afghanistan, more than 100 high school students from the Takhar province were poisoned by fanatics hostile to girls’ education. Malala Yousafzai - The right to learning should be given to any child. Best inspirational speech by Malala Yousafzai. Girls' Education and Gender Equality. Girls' education and gender equality are central to GPE's vision of improved learning and equity for all, through stronger education systems by 2020. 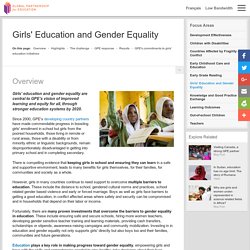 Since 2000, GPE's developing country partners have made commendable progress in boosting girls' enrollment in school but girls from the poorest households, those living in remote or rural areas, those with a disability or from minority ethnic or linguistic backgrounds, remain disproportionately disadvantaged in getting into primary school and in completing secondary. There is compelling evidence that keeping girls in school and ensuring they can learn in a safe and supportive environment, leads to many benefits for girls themselves, for their families, for communities and society as a whole.

Girls' education and gender equality. Despite progress in recent years, girls continue to suffer severe disadvantage and exclusion in education systems throughout their lives. 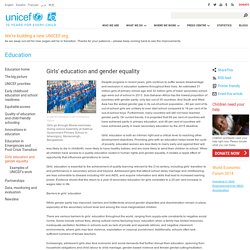