| Cobblestone is the undisputed leader in the car wash industry in Phoenix, Az.. Cobblestone Auto Spas are modern and up to date in both appearance and operation. We use the best equipment and products available. We also use the best computer cashiering and tracking system in the industry, making it easy for our customers to do business with us.

EVERYTHING YOU SHOULD KNOW ABOUT AUTO DETAILING. Many people think car washing and car detailing are one and the same. But this is not the case. Detailed car washing goes beyond the normal car wash to make a vehicle look spotlessly clean both inside and outside. Unlike car washing, detailing does not involve using an automated system to do the cleaning. Instead, it involves handwashing by very experienced detailers. Car wash detailing is divided into two components: Interior Detailing and Exterior Detailing. Exterior Detailing – It involves vacuuming, restoring, and surpassing the original condition of the exterior constituents of a vehicle, such as tires, windows and wheels, among other visible components.

Impress Your Clients All Year Round. A lot of us are employed in jobs where we’re required to spend much of the day in our cars. 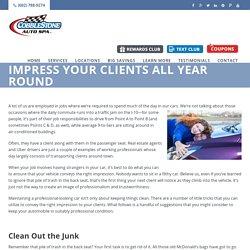 We’re not talking about those occasions where the daily commute runs into a traffic jam on the I-10—for some people, it’s part of their job responsibilities to drive from Point A to Point B (and sometimes Points C & D, as well), while average 9-to-5ers are sitting around in air-conditioned buildings. Often, they have a client along with them in the passenger seat. Real estate agents and Uber drivers are just a couple of examples of working professionals whose day largely consists of transporting clients around town. When your job involves having strangers in your car, it’s best to do what you can to ensure that your vehicle conveys the right impression.

Maintaining a professional-looking car isn’t only about keeping things clean. Clean Out the Junk Remember that pile of trash in the back seat? “But,” you protest, “What if that stuff lying around on the back seat isn’t really junk? The 6 Fluids Your Vehicle Craves the Most. Cars are thirsty beasts. 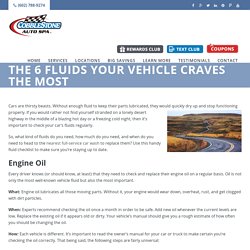 Without enough fluid to keep their parts lubricated, they would quickly dry up and stop functioning properly. If you would rather not find yourself stranded on a lonely desert highway in the middle of a blazing hot day or a freezing cold night, then it’s important to check your car’s fluids regularly. 18 Car Buying Tips and Myths. When it comes to cars, the myths are endless. 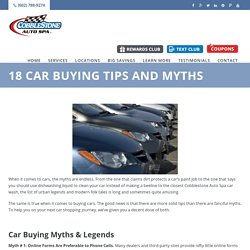 From the one that claims dirt protects a car’s paint job to the one that says you should use dishwashing liquid to clean your car instead of making a beeline to the closest Cobblestone Auto Spa car wash, the list of urban legends and modern folk tales is long and sometimes quite amusing. The same is true when it comes to buying cars. The good news is that there are more solid tips than there are fanciful myths. Is Your Car Ready for the Arizona Winter? When most people think of Arizona, they conjure images of summer landscapes: a blazing hot sun rising over vast swathes of baked clay and cacti. 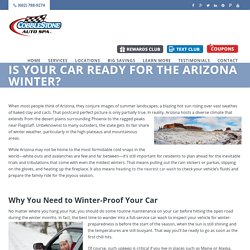 That postcard perfect picture is only partially true. In reality, Arizona hosts a diverse climate that extends from the desert plains surrounding Phoenix to the ragged peaks near Flagstaff. Unbeknownst to many outsiders, the state gets its fair share of winter weather, particularly in the high plateaus and mountainous areas. College Students and Distracted Driving: The Ultimate Guide to Driving Safe!

Pokémon Go may not seem like the most dangerous activity in America, but, along with daydreaming and making out, collecting Poké Balls may be one of the deadliest pursuits around—at least if you hunt down virtual creatures while you’re barreling down the road at a cool 80 miles per hour! 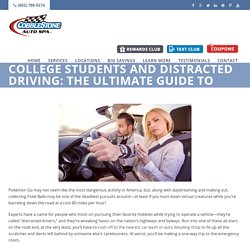 Experts have a name for people who insist on pursuing their favorite hobbies while trying to operate a vehicle—they’re called “distracted drivers,” and they’re wreaking havoc on the nation’s highways and byways. Run into one of these all-stars on the road and, at the very least, you’ll have to rush off to the nearest car wash or auto detailing shop to fix up all the scratches and dents left behind by someone else’s carelessness. At worst, you’ll be making a one-way trip to the emergency room. Driving Fail You’d think it would be obvious. Ile you steer a few thousand pounds of steel down the road, unless you want to know the original meaning of heavy metal. Rules, Rules, Rules Sadly, most can’t. Whe Sources: Preventative Maintenance Tips To Keep Your Car In Good Condition. Anyone who purchases a new or used car has every intention of getting the most out of their vehicle. 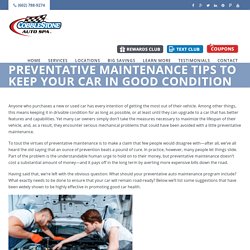 Among other things, this means keeping it in drivable condition for as long as possible, or at least until they can upgrade to a car that has better features and capabilities. Yet many car owners simply don’t take the measures necessary to maximize the lifespan of their vehicle, and, as a result, they encounter serious mechanical problems that could have been avoided with a little preventative maintenance. To tout the virtues of preventative maintenance is to make a claim that few people would disagree with—after all, we’ve all heard the old saying that an ounce of prevention beats a pound of cure.

In practice, however, many people let things slide.